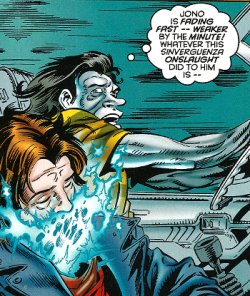 There was other trouble for Jono, however. Thanks to Gateway, Jono had briefly seen the mysterious villain, Onslaught, and even remembered seeing his face, though Onslaught had erased his memory of it, leading Jono to the conclusion that he must know him or else that action wouldn’t make any sense. Worse, ever since that incident, he’d become unfocused and his power was acting up. As the others as well as the teachers were away, Skin had the idea to take Jono to the Xavier Institute to get him some help. However, they were violently stopped on the road by the X-Cutioner, who believed Skin to be a murderer. [X-Men (2nd series) #49, Generation X #15-16]

Remembering that Chamber had no need to breathe, Skin hid his weakened friend in a pool of mud, before facing and eventually defeating his hunter. Unfortunately, their car being damaged, Skin and Chamber had now to hike their way to Westchester, but they never made it there. With the threat of Onslaught being dealt with by the X-Men and several other heroes, Jono quickly recovered and the two mutants no longer needed to continue their journey. However, they also did not return back home yet. Instead, Skin wanted to take care of some private business in Los Angeles and, out of gratitude, Jono agreed to come along, which led to them sharing some bizarre adventures before they returned to school. [Generation X #17-21]

Several weeks later, Paige invited Jono to the Guthrie’s home for a Thanksgiving holiday. Both were rather awkward around each other, though, especially since Jono never talked about his own family. When they reached the farm and nobody was there to welcome them, Jono presumed it was due to his freakish looks, pretty much annoying Paige,

who made it clear that with two mutants being part of the Guthrie family, they treat everyone with the same respect. When the pair searched through some old stuff of Paige’s, Jono saw a picture that had been taken of the Guthrie parents when they were quite happy. Jono told Paige that he could never be like her father and they could never have a real relationship like her parents had. He then left the Guthrie farm, leaving behind an angry Paige, who felt he believed - wrongly - that she needed coddling. [Generation X #23] 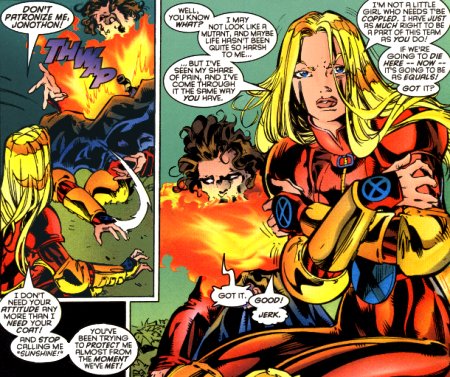 For the next months, the two mutants avoided talking to each other. Eventually, the members of Generation X were captured by Black Tom Cassidy, who dumped them in the ocean, thousands of miles away from anywhere or anyone. Even out there, faced with the possibility of either drowning or dying of thirst, Paige and Jono managed to fight. [Generation X #26]

By a strange twist of fate, the kids were rescued and taken to San Francisco, only to find themselves hunted by Prime Sentinels of Operation Zero Tolerance. Once more faced with overwhelming odds and the possibility of being killed for being mutants, this time the two of them managed get a little friendlier. Jono apologized for how he had acted during the Thanksgiving holiday and Paige forgave him. During the battle with the Sentinels, both of them were taken out rather quickly, but an explosion destroyed the Sentinels before they could further harm them. [Generation X #29-31]

Back at the Xavier Institute, Generation X continued to have several weird adventures. At one point, when Psylocke was tricked by the Shadow King into releasing a telepathic pulse-wave, the results were felt worldwide, as the power of everyone with psi-sensitive powers were disrupted. Chamber was among them and was suddenly unable to telepathically communicate with the others, although the rest of his powers were unimpaired. [X-Men (2nd series) #77, Generation X #42] 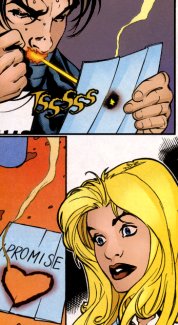 He was still mute when Husk had to leave for Kentucky to tend to her ill mother. Husk told him she knew things had been rough for him but asked him to promise he’d stay until she return. He did and used his powers to burn a heart into the sheet of paper. Husk first raved about his growing control until she understood what he had been trying to say and hugged him. [Generation X #44]

Over the following weeks, the telepaths’ powers slowly returned. Chamber’s was among the first, though he kept quiet about it at first. In his typically, morose way, he just didn’t feel he had a lot to talk about. [Generation X #45] 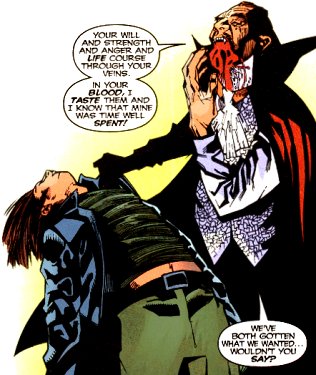 At one Halloween, the vampire lord, Dracula, influenced Jono via his dreams. Dracula came into the school and intended to bite Paige, who’d returned for a visit, which was thankfully prevented by the nature of her husking power. However, he abducted Paige, trusting that Chamber would follow to save her. Dracula wanted Chamber’s power and lured Jono with promises of being whole again. Dracula took some of his blood, until Banshee managed to snap the boy out of his stupor and they managed to destroy Dracula with sunlight – for the time-being. It is unknown whether there will be any effects from Jono’s being bitten by the vampire lord. [Generation X Annual 1998] 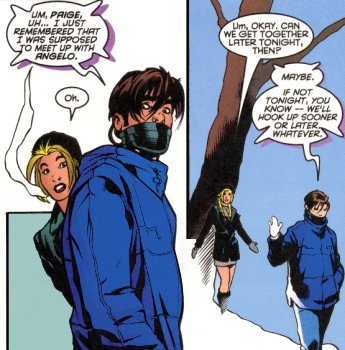 When Paige returned to school for good, Jono felt trapped, as he’d only told Paige he loved her because he thought he wouldn’t see her for a long time, so he tried to avoid her. Paige did not want to go into emotional turmoil again and, though she didn’t understand the reasons for Jono’s erratic behavior, she decided to give him a taste of his own medicine and too gave him a cold shoulder. Around the same time, the school started to accept human students to pay for the bills and the Generation X members suddenly had to be careful about their secret identities. Jono had to pass as a mute, burn victim, a fact he wasn’t too happy about. [Generation X #48-51] 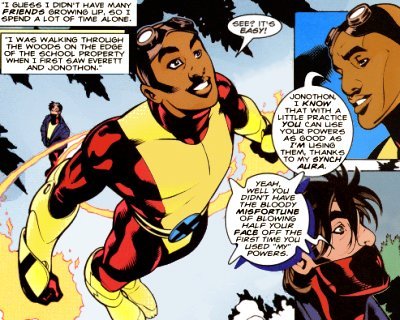 It was also rather frustrating that the power-morph, Synch, could use Jono’s powers better than himself, as he could use them to fly, something that Chamber hasn’t managed to do to the present day. [Generation X #52]

The never ending drama regarding the relationship of him and Paige entered another phase when she started to respond to the advances of a new, human student, Tristan Brawn, while Jono, in turn, had to avoid the interest of overly curios new female students. Both of them acted coolly towards each other, for the coming time, while at the same time being jealous each time the other one even looked at another boy respectively girl. [Generation X #52, 54, 57, 59]

Over the following months, though, tempers cooled down and Paige and Jono both stopped their foolish behavior, acting friendly, though not romantic again. When the school’s secret of harboring mutants was outed, life changed a lot for the teenagers and their teammate, Synch, paid the ultimate price, when he sacrificed his own life while trying to disarm a bomb. Their home in ruins, Generation X decided that the time for training and learning was over and that they needed to use their powers to help others. [Generation X #70] 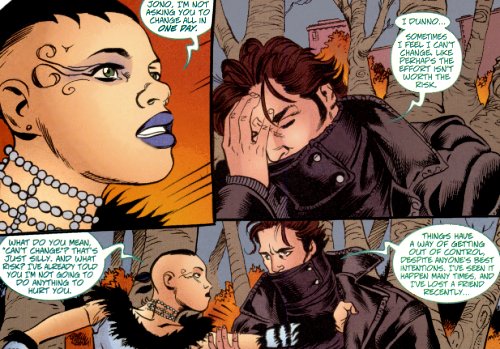 Several missions later, Chamber went on a trip to New York, where he visited a record store and met a deaf goth girl. When he used his telepathy on her, Jono scared the hell out of the girl, as being deaf she wasn’t used to “hearing” anything at all. After awhile, though, she got used to it. The two immediately hit it off and she wasn’t frightened of him or his powers. Rana, how she was called, gave him her address and made Jono promise to write her. However, Jono later threw the address away, bitterly thinking that it couldn’t lead to anything anyway, considering the way mutants like him lived. [Generation X #71]