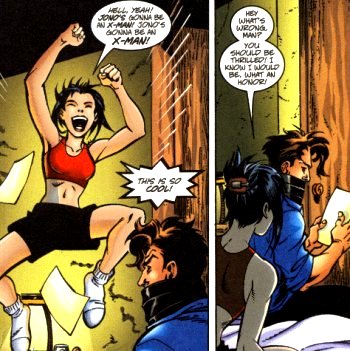 Finally, the members of Generation X decided to leave the school, brought on among other things by Emma Frost’s scary behavior, Banshee drinking too much after the death of Moira MacTaggert and the fact that Jono had been invited by Xavier to graduate to the X-Men. While the others were happy for Chamber, they also realized that life should have more in store than just waiting for them to receive a similar letter. Paige tearfully bade Jono good-bye, as they never really had a chance to figure out where they stood. Jono told her that he’d written her a letter, promising her this wasn’t good-bye. [Generation X #75]

While he had made the other Generation X’ers believe that he would follow Xavier’s invitation, Jono wasn’t interested, though, and instead returned to London. 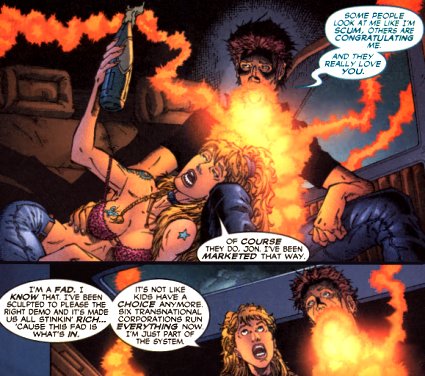 In a nightclub, he saved pop sensation Sugar Kane’s life and the two started an affair. One team of X-Men visited him, once again asking him to join them and reminding him of his duties and warning Jono that Sugar was just using him. Jono refused to listen, even though the world treated him as Sugar’s “pet mutant.” There was a huge backlash, however, when rumors started about Sugar being pregnant with his child. Eventually, Sugar confessed that she’d indeed used him and the scandal surrounding his mutant status to give her career a much needed boost and suggested he join his friends, which he did, as the sort of life she lived wasn’t fit for a human being. [Uncanny X-Men (1st series) #395-398] 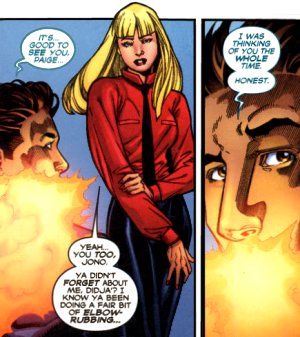 The X-Men soon gained another recruit in Stacy X, a former prostitute. Despite her rebellious attitude, she and Jono got along and he helped her to fit in a little bit better. Before long, Chamber also met several of his old teammates again. As the X-Men investigated Banshee’s new militant European mutant organization, X-Corps, intended to police mutant crimes, they found that Husk, Jubilee and M were with the group to keep an eye on Banshee. In light of the media reports about the Sugar Kane affair, Jono and Husk’s reunion was rather awkward.

Jono investigated the X-Corps HQ and found a special prisoner in the basement – Mastermind, whose telepathic / illusion powers Banshee was using to keep the criminal members of the X-Corps under control. Mastermind sensed the raw power at Chamber’s disposal but, as he never had fully explored his telepathic skills, she could easily outsmart and trap him on the astral plane, or so she thought. Chamber eventually escaped and eavesdropped on a conversation between her and Mystique, who had infiltrated the X-Corps. 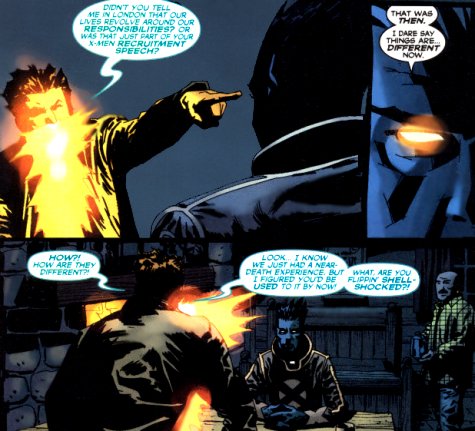 However, Jono was knocked out before he could do anything about it and was found and saved by Nightcrawler before a bomb went off in the building, blindly teleporting both of them away. They ended up at the place of an old Circus pal of Nightcrawler’s and, as he revealed his insecurities, Jono became angry and disappointed, considering Nightcrawler was the one who had talked him into joining the X-Men, reminding him of his duty. [Uncanny X-Men (1st series) #401-407]

Despite his pep-talk towards Kurt, Chamber himself was not so much convinced about his own place with the X-Men, as he confessed to Scott Summers during another mission. Jono realized that he felt the school was too secluded and, while it was great for the mutants who attended, he thought that hiding from the world outside was not the right approach. 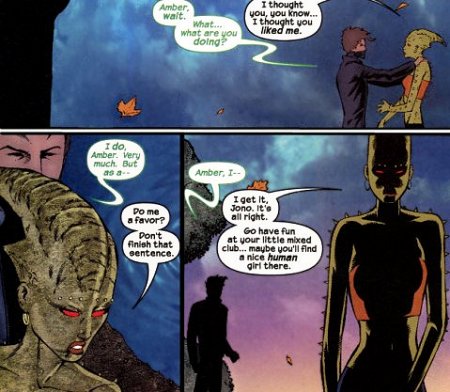 When the X-Men were asked to help with a case where several mutant members of a student peace group at Empire State University had been killed - the only survivor being the human founder of the group, Gigi Martin - Chamber decided to enroll undercover as another mutant student to investigate. There, he befriended another mutant named Amber and got into conflict with a militant mutant group and his roommate, Walter, who disliked mutants. During the investigation, Jono was also confronted with the hard truth that he too trusted Gigi because of her beautiful looks, while he was only willing to respond to Amber’s obvious affections when he learned that she was a shape changer and not stuck in the reptilian form he got to know her in.

Chamber eventually found out that the deaths were an accident – Gigi’s boyfriend, who had a similar power to Chamber’s - but less control – had inadvertently killed himself and the others. However, Gigi claimed the whole thing was an attack on mutants, as she didn’t want the university to expel mutants because of them being too dangerous. Eventually, the ESU program for mutants was closed to be replaced with an exchange program with Xavier’s school. While one mutant student, Amber, remained at ESU, Xavier accepted a human student in return - Chamber’s roommate, Walter. Jono too returned to the Institute in Westchester, though not back to active duty. He found he still had a lot to learn and wanted to concentrate on teaching the newer students. [Chamber #1-4] 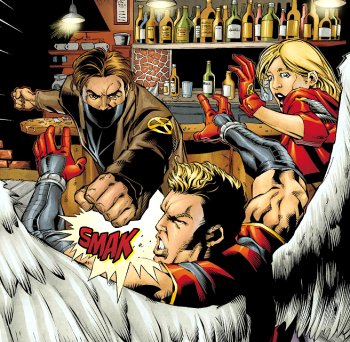 However, he was in for an unexpected surprise. While he had been away, his ex, Paige, had joined the X-Men and started a relationship with her teammate, the handsome Archangel, despite their huge age gap. Jono reacted rather bitter when he saw the two of them, and likewise Paige told Jono in no uncertain terms that they were through. Jono, overhearing school nurse Annie’s comment that girls want a man who can kiss, didn’t help any. [Uncanny X-Men (1st series) #422-423] 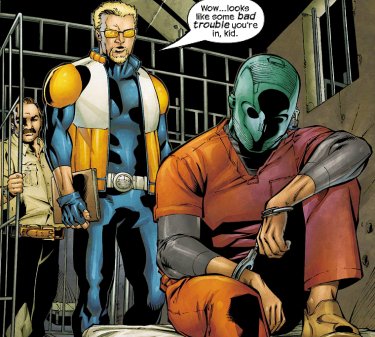 Around the same time, Wolverine and the X-Men had grown increasingly concerned about the revitalized Weapon X Program, and rumors of its mutant death camp called Neverland. Capitalizing on his current woes, Chamber volunteered to be the lead in an X-Men operation to infiltrate the program. He went to a bar in Westchester and deliberately started egging on the other patrons with his sullen demeanor, instigating a minor brawl. The X-Men arrived to "deal" with him and, to officially and publicly cut ties with him, they knocked him out and turned him over to the local authorities. In prison, he was visited by agent Brent Jackson, who not only freed him of the power-negating shackles but also made a striking offer - he wanted Jono to join the Weapon X Program. 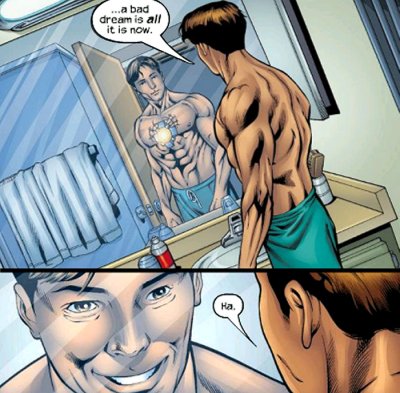 Everything was going as planned, and Jono was accepted into Weapon X. They managed to fix his face, genetically re-engineering the portions of his body he had lost to his powers, leaving only a bionic implant in the center of his chest which would focus his power blasts as necessary - he could now eat, breathe, smile, even floss just as he could before.

Naturally, this all didn't come for free, and Jackson informed Chamber that his first mission would be to assassinate John Sublime, leader of the U-Men. Even though Wolverine, his covert contact with the X-Men, sanctioned him to go ahead with the "test" mission, Jono still had serious misgivings about having to take a life. He succeeded in his mission, despite his reluctance, but began to question whether he was doing the right thing by straddling the fence as he was. [Weapon X (2nd series) #15-18]