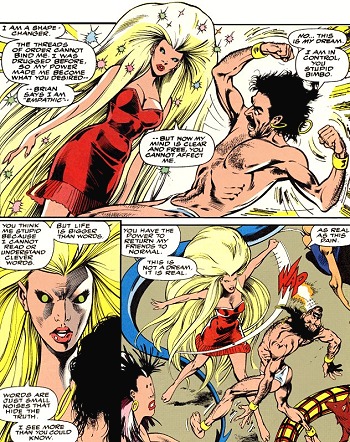 BIOGRAPHY - Page 3
In need of new headquarters, Excalibur moved to Braddock Manor. Their housewarming party was crashed by Jamie Braddock and the evil Satyr-9, who had taken the place of Brian’s ex Courtney Ross. The party guests were all drugged but Meggan eventually overcame her trance and managed to defeat the reality—warping Jamie single-handedly, something it had taken the entire team to do previously. Unfortunately, Brian was still under Satyr-9’s control and she ordered him to kill the shape-changer. Meggan did not fight back, trusting that Brian would not be able to hurt her. Indeed, the sight of his lover snapped Brian out of it. [Excalibur (1st series) #55-56]

In the weeks that followed, Brian became obsessed with avenging Courtney’s death and finding Satyr-9, who had escaped via unknown means . His obsession put a strain on the couple’s relationship, as he neglected Meggan’s needs during that time.

It was Nightcrawler who alerted Brian that his behavior was slowly driving Meggan away. Following Kurt‘s advice, he took Meggan vacationing to the south coast of England. Once there, Brian apologized for his attitude 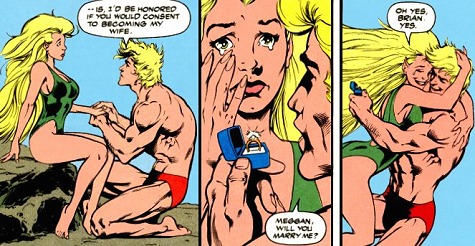 and tried to make up for everything. He eventually proposed to Meggan and she happily accepted. Later that week, Meggan was shocked when Brian suddenly lost his powers in mid-flight, plummeting out of the sky into the sea. When asked about the reasons for her somewhat evasive reaction to the incident, Meggan explained that she was able to see the unique energy aura that surrounded Brian, until it vanished. Further pressed, she admitted that it was his aura that attracted her to him and she was unsure whether she could still love him without it. [Excalibur (1st series) #61-63]

Brian's power loss was caused by a combination of Brian wearing the suit that originally belonged to an alternate Captain Britain and a late reaction to their tampering with Otherworld’s energy matrix. The error was easily fixed by Roma who attuned the new suit to Brian but the damage to their relationship was done. Although Brian insisted that they were more than their looks, Meggan still had doubts. When she asked Brian if he would have ever loved her if she had not discovered her powers and assumed a form that he desired, Brian

had no answer. Their argument was interrupted by another mission alongside Excalibur. The team decided to help Rachel return to her alternate timeline, the Days of Future Past, and help end the Sentinels' rule of her world. In the year 2015, Meggan and Brian learned from some local heroes that their counterparts in this world had indeed married and even had children, before they were killed. This knowledge, plus fighting overwhelming odds side by side, renewed their feelings for each other. Meggan and Brian decided that their love could overcome anything. [Excalibur (1st series) #66-67] 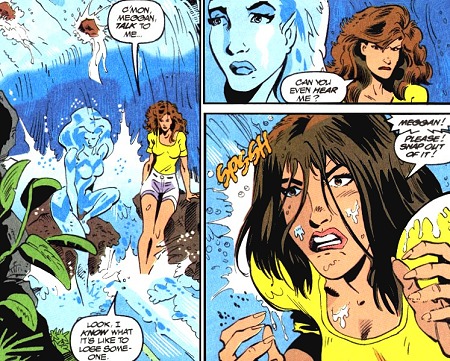 However, a cruel twist of fate divided the lovers once again. During the team’s journey back to the present, Brian was swept away by a chronal anomaly and seemingly lost in the timestream forever. Her lover no longer by her side, Meggan fell into a catatonic state and sought refuge in a waterfall on the Braddock estate. She sat there all day, neither eating nor sleeping. Her concerned teammates tried to snap her out of it, to no avail. Even Rachel could not establish contact with her telepathically. [Excalibur (1st series) #68] 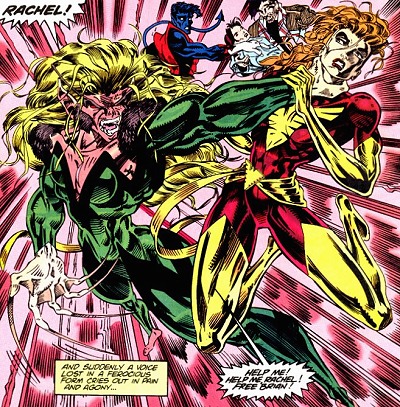 In actuality, Meggan was reaching out with her empathic powers like never before, beyond the borders of time and space, to stay in contact with her lover and serve as an emotional anchor for him. After sitting motionless for weeks, Meggan finally showed some liveliness. She was totally unstable though, shifting into animal forms on instinct alone. She sensed that Brian was nearby and somehow connected to Rachel, the true chronal anomaly. Rachel had suspected this might be the case but kept this a secret, causing Meggan to attack her in a bestial rage and demand her help in returning Brian to her. Eventually, Rachel accepted her fate and entered the timestream in Brian's stead to To ensure his safe return to the present. [Excalibur (1st series) #73-75] 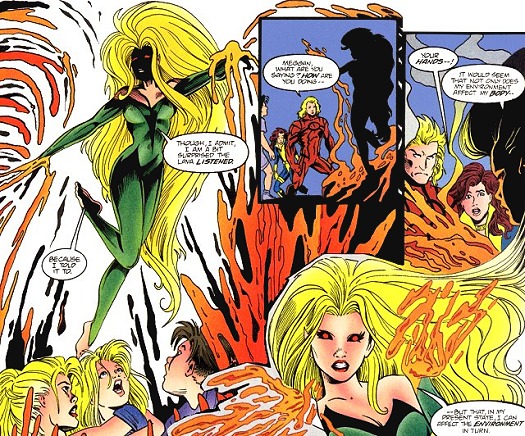 Meggan had strained her powers to their limits and beyond to find Brian. As a result, her powers reached a new level of control and depth. When the team and some civilians were trapped in a cave-in with molten lava threa-tening to kill them all, Meggan discovered that not only was she affected by her environ-ment but that she could influence her surroundings as well. Further examination by Moira MacTaggert revealed that Meggan could control and shape lava, fire, even electromagnetism as all the forces of nature obeyed her every command. [Excalibur (1st series) #80, 93]

However, she was not the only one to go through a change. The experience of being stranded in the timestream and witnessing a multitude of timelines was almost too much for a human mind to handle and left Brian a changed man. He acted somewhat haughty and rushed the team into action on some of his “hunches,” which were based on the future scenarios he had experienced. While this concerned the rest of the group, Meggan joined her lover in his aloofness, as she was just happy to have him back. She promised him that they would sort out his problems together and, over the course of several weeks, Brian and Meggan both calmed down and reverted to their regular selves. Brian stepped down to part-time status with the team, devoting some of his time to his scientific studies instead. Meggan happily continued to serve with the team. Around that time, she successfully completed her reading and writing classes and was now fully literate. [Excalibur (1st series) #76, 81, 86, 96] 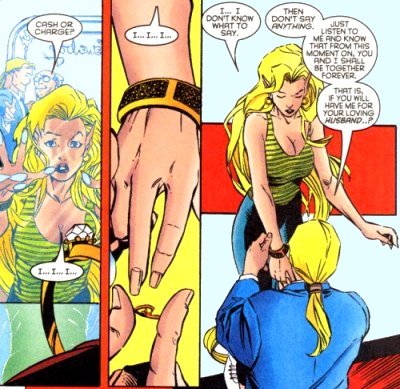 With their lives once again stable, Meggan and Brian revived their wedding plans and set a date. While in London shopping for an engagement ring, the couple was attacked by the Dragons of the Crimson Dawn. Meggan was knocked out during the battle and the Dragons kidnapped Brian and took him to a temple in Hong Kong, where the Dragons wanted to use his energies to recreate an ancient kingdom. Once Meggan came around, she alerted Excalibur and together, the heroes traveled to Hong Kong to rescue Brian. [Excalibur (1st series) #102, 107] 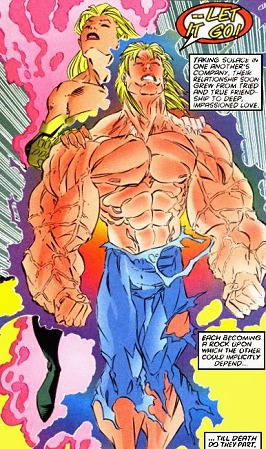 During the ensuing battle, Meggan was contacted by the spirit of a former member of the Dragons, who had been killed by the others. Only Meggan could see the ghost and the rest of the team feared that she was going mad. Following the instructions of the spirit, Meggan found her lover just in time. The Dragons had already set events in motion that caused Brian’s personal energies to reach critical limits, which they were about to leech off. Meggan helped Brian re-channel the powers he had built up within his body and it was harmlessly released into the atmosphere. However, as a result, Brian had entirely lost his abilities as Captain Britain and felt he needed some time alone to adjust to these changes. Meggan understood, so they postponed their wedding until Brian had returned from his personal quest to discover his place in life. [Excalibur (1st series) #108-110]