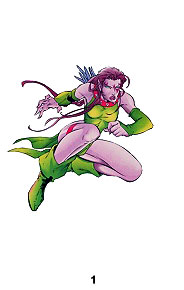 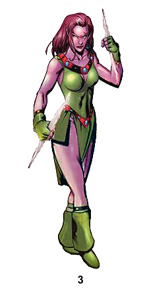 1) As a member of her timeline’s X-Men, Blink wore a green dress, slit on both sides, long sleeves that weren’t connected to the dress and boots in matching color. Attached to the dress was a purplish necklace with silver coin-like circles, as worn by several of her teammates, an element obviously taken from Magneto’s costume. Blink’s outfit was completed by a quiver for her crystalline javelins and a garter-like purple band around her upper leg. [X-Men Alpha]

2) During one mission, the Exiles had to disguise themselves to avoid recognition. As Blink was unfamiliar with the people they would meet, she had no reason to dress up, though she too slightly altered her costume. Her dress was now low-cut, and had additional straps around her upper arms, leaving her shoulders bare. Also, she got rid of the sleeves and went for short gloves instead (they were often miscolored, leaving the impression of thick armbands). Additionally, she wore a blue wristband above each hand and similar bands above her booths. [Exiles (1st series) #3]

3) Over the course of several missions, Clarice further changed the costume. The dress got shorter, and was cut more like a mini skirt. Also, it now had a low back, for which the straps around her arms also had to be removed again, just like the quiver. The biggest change, though, was the addition of a belt, similar in design to the Magneto-inspired necklace. The wrist- and ankle-bands shifted color, from blue to either brown or dark green. [Exiles (1st series) #12] Further modifications of the costume had the necklace becoming smaller and appearing around her neck, more like a collar.

-) Blink kept on subtly changing her costume, or she alternated between her previous designs until she was taken of the team by the Timebroker. 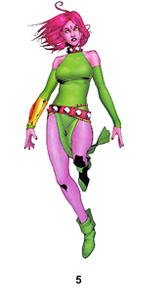 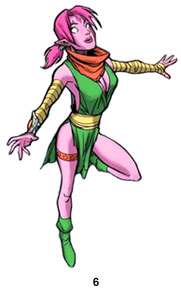 4) By the time she returned to the team, Blink‘s outfit was a combination of her previous costumes. It had the basic green dress, necklace and belt, the short-gloves including the wristbands and the green boots. The only thing new was that the quiver was now securely strapped to her chest. [Exiles (1st series) #43]

5) Shortly after, Blink changed her look again, once more a combination of older elements, though almost the opposite to her previous costume. This time, the necklace became a collar once more, and the gloves were replaced with the unattached long sleeves. While she dropped the quiver, Blink kept the belt, though she is wearing it somewhat loose around her hips. [Exiles (1st series) #46] This outfit is, so far, the one that Blink has worn for the longest time without changing or altering it.

6) When Blink left the Panoptichron to recruit new Exiles, she adopted a new variation of her old costumes, only with a rustic twist. She wore a tattered, low-cut green dress with slits on the sides below the waist and wrapped bandages along the length of her arms. She belted the dress with bandage material as well and reused some of her old studded necklace material to create a leg garter on her upper right thigh. Completing this look was a voluminous, orange infinity scarf around her neck. [Exiles (2nd series) #1]