Shortly after his arrival, the New Mutants became X-Force, and James took the new codename of Warpath. Although he had been leader of the Hellions before, he had no problems to accept following the orders 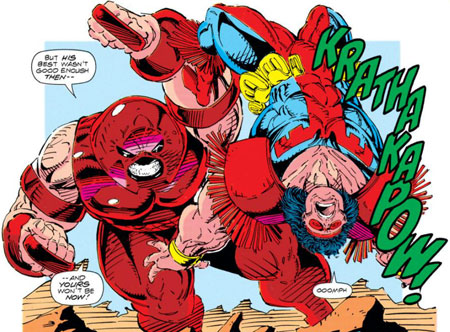 of Cable or Domino, and he got along with the rest of the team rather well. X-Force business kept Warpath from pursuing his personal quest for a few months, but he never forgot his anger and his need to get even with the murderer of his tribesmen. All the while, James’ strength levels were still increasing, in one occasion he even managed to stand his ground going a few rounds toe to toe with the Juggernaut. [X-Force (1st series) #3-6]

With their old headquarters devastated following an encounter with Weapon Prime, Warpath offered to let the team use the abandoned Camp Verde reservation as a base of operations. As they had no other options, X-Force accepted and relocated to Arizona. [X-Force (1st series) #14-15]
It wasn't until the X-Men temporarily incarcerated the entire X-Force team at the mansion (over a misunderstanding, them believing Cable to have assassinated Professor Xavier) that James learned that the fledgling Upstarts had assassinated and incapacitated the entire old guard of the Hellfire Club’s Inner Circle, including Fitzroy putting Emma Frost in a coma and murdering nearly all of the remaining Hellions, Jimmy's old teammates. With his revenge now a moot point, Warpath continued to serve with X-Force to give his life some meaning and he accompanied Cannonball and Firestar to Nova Roma, to inform Magma and Empath of the Hellions‘ fate. [X-Men (2nd series) #17, New Warriors (1st series) #31]

Afterwards, X-Force decided to move on and find themselves a new purpose. However, before they left the mansion, 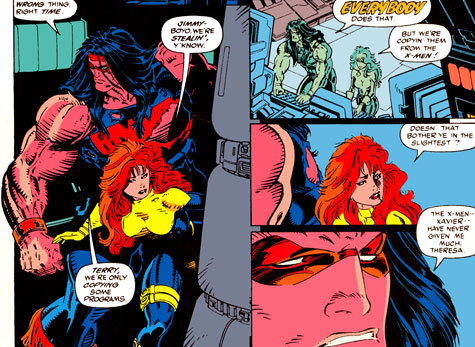 James convinced Siryn to make a copy of the X-Men’s database to help the team getting started again. Warpath had no such quarrels stealing from the X-Men, where he was concerned they had never given him much. First, they had cost him his brother, and now they had locked him up. Besides, he reasoned, the ends would justify the means and the copied data would surely help X-Force to catch some bad guys. Unbeknownst to James, Xavier telepathically noticed the theft, but didn’t do anything about it. [X-Force (1st series) #19]

Warpath had another reason for staying with X-Force - him developing romantic feelings for a Theresa Rourke Cassidy, aka Siryn. 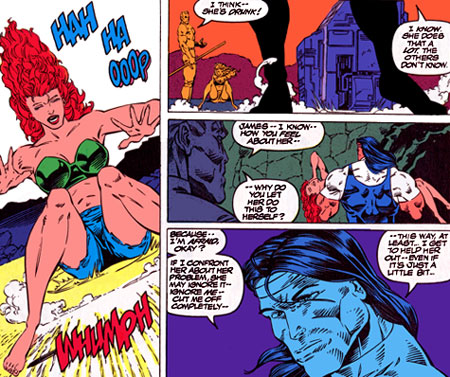 He would make her a few compliments every now and then, and was rather protective of her. As such, he noticed that she began drinking more and more, but Proudstar found himself still caring for her in this state, getting her to bed after a binge and cleaning her up. The only other person on the team to recognize was Cable and, upon his advice, James ultimately confronted Theresa with her alcoholism and his feelings for her, even though it meant risking to ruin any chance he might have had with her. At first, Siryn didn’t want to hear anything of it, but eventually she admitted her problem and Warpath provided her a shoulder to cry on. [X-Force (1st series) #21, 26, 29-30]

Wanting to reconnect with herself, Theresa felt that a visit to Cassidy Keep in her native Ireland was in order, and she asked James to come along. 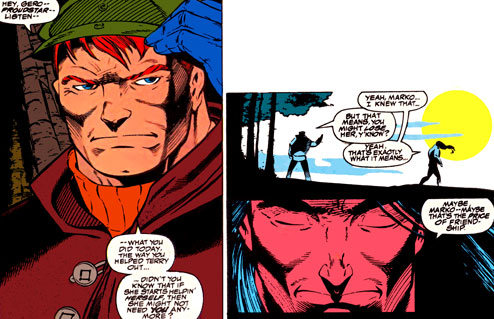 However, during the first two weeks of their stay, Siryn’s alcohol problem increased. Only after Warpath got in contact with the Juggernaut to bring Theresa together with her "uncle," Black Tom Cassidy, and the two of them seemed to find peace with each other, did Siryn get a handle on her drinking. Theresa still wanted to remain "just friends" with James, though, and while he was willing to accept the situation, his heart was still broken. [X-Force (1st series) #31] 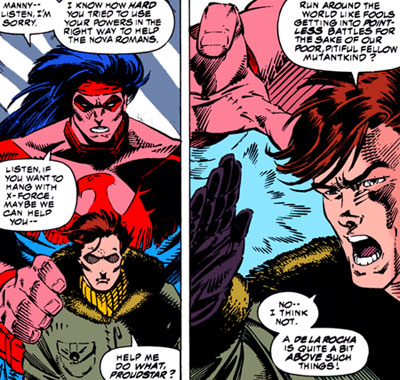 After their return, X-Force got involved in the Younghunt, a competition of the Upstarts with all former members of the Hellions and the New Mutants being their targets. In the aftermath of this conflict, Magma ended her long relationship with Empath because of the way he had manipulated her. Though he never liked him that much, Warpath felt obliged to offer his former teammate a spot among X-Force and to help him get over the break-up, but arrogantly Empath declined. [X-Force (1st series) #34]

Some time later, it was discovered that Professor, the computer program running Cable’s equipment, had gained full sentience and built itself a body out of spare machine part. However, as his presence began screwing up Cable’s techno-organic body parts, it was decided that Prosh, as he called himself by then, needed to leave Earth. Though capable of designing himself a spaceship, Prosh needed to absorb a lot of mass to do so. Warpath had no objection for him to use the remains of Camp Verde, in fact he found it rather symbolic for some new life to grow out of the ashes of the reservation. He only asked for Prosh to leave alone the tribe’s ancient burial ground; the rest of Camp Verde was for him to use. Naturally, this also forced X-Force to relocate to another headquarters. [X-Force (1st series) #39]

A couple of weeks after Emma Frost awoke from her coma and began teaching Generation X at the Massachusetts Academy, Warpath went to confront her about the massacre at Camp Verde. 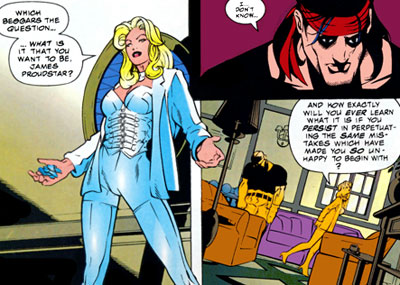 She revealed to him what James had already known deep down inside his heart - she was not responsible for the attack on his people. They had a long discussion about how Jimmy needed to find his place in the world. Emma pointed out that Warpath wasn't really committed to Cable's view of the future and his unrequited love for Siryn was hardly a reason to stick around on the team. She also mentioned how he originally left the Hellions because he had no longer wanted to grow up like his brother, yet today he was still copying his brother's appearance, wearing a variation of his costume and generally living in his shadow. Although James pointed out that Emma should listen to her own advice, after all she too was repeating her past mistakes, he couldn’t deny the truth behind her words. [X-Force (1st series) #42]

Warpath began making changes in his life, starting with a new buzzcut and a change of wardrobe. Cable was on a similar line of 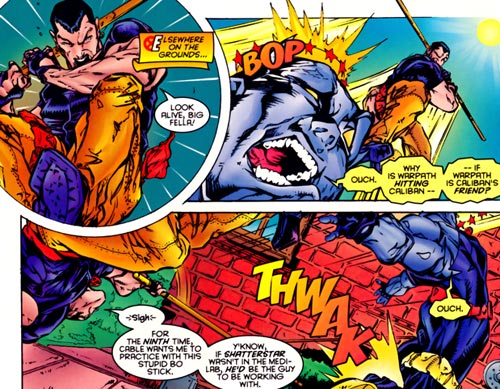 reasoning at the time for the entire team, deciding to move X-Force into Xavier's Mansion alongside the X-Men, make them wear costumes all patterned in the same colors and push them to explore their powers and create new boundaries for themselves. In Warpath's case, Cable had James begin practicing with a bo staff as a personal weapon for combat, something which he wasn’t too fond of. [X-Force (1st series) #44]

James was worried sick when Siryn went missing, though actually she had only been sent away by Cable on an undercover mission. When she returned a few days later, Warpath was at first overjoyed to see her, but as she gave him a cold shoulder, not even bothering to explain where she had been, he was rather let down. [X-Force (1st series) #47] 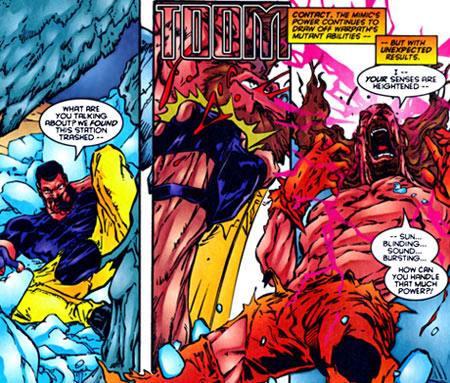 An encounter with Mimic led Warpath to explore his powers in ways he hadn't conceived of before. When duplicating his abilities, Mimic cried out in pain, asking how James could stand the increased sensory input. Up until this point, Warpath had never been aware of his heightened senses, a trait that his late brother possessed, as he had always relied on his strength. Jimmy soon began demonstrating superhuman running speed and highly developed senses. [X-Force (1st series) #46, 51]