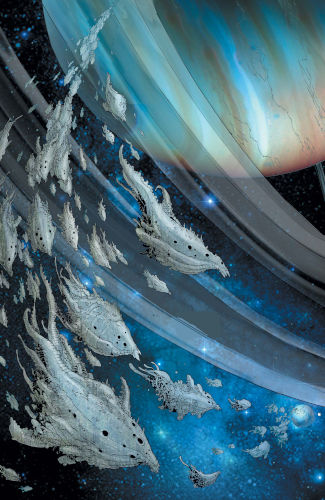 Golgotha are immense sluglike creatures, of unknown origin, with a fungal biology. The creatures are psychic parasites, which start the size off a pea and gorge upon the psychic energy of anyone in their vicinity, growing to the size of a whale. Once they reach full size, a Golgotha moults the bulk of its form, returning to tiny size, to repeat the cycle once more.

The process of feeding upon psychic energy has the side effect of inducing insanity and violent outbursts in its hosts. The molted form of the Golgotha still retains a sluggish consciousness, which continues to induce madness after the actual creature has departed.

Fully grown, the creatures can measure up to fifty feet in length, with spines along their dorsal ridge and various tentacles and polyps on their underside. While they feed on psychic energy, the aliens also possess a small mouth with prominent teeth, though whether they eat physical food is unknown.

The creatures are also capable of surviving, and travelling through, deep space.

The creatures that would come to be dubbed the Golgotha first came to the attention of humanity when the X-Men responded to a distress call from a mutant community in Antarctica. One of the creatures had gorged on the psychic energy of the facility’s residents, driving them to slaughter each other before shedding the bulk of its form.

Investigating the facility, the X-Men discovered the mass of corpses and the words “Golgotha” painted on the wall in blood. Soon after, the mutants discovered the alien’s molted form and dubbed it Golgotha, due to the message left by its victims. As the Golgotha’s husk still retained a sluggish consciousness and movement, the X-Men didn’t realize it wasn’t the actual original creature. Wanting to study the alien further, the X-Men brought it back to the X-Mansion, dragging its massive bulk under the Blackbird with chains. 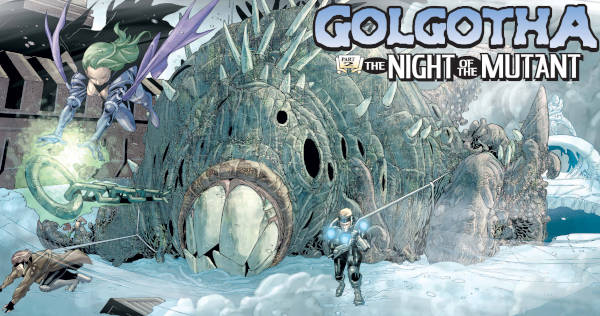 As Golgotha is another name for Calvary, the believed location of the crucifixion of Jesus Christ, the X-Men travelled there and discovered what they believed was a second Golgotha creature. In actual fact, it was another molted form from of the true Golgotha, likely shed before the alien came to the mutant facility in Antarctica.

After Antarctica, the Golgotha had travelled to Los Angeles, causing riots with its madness-inducing powers. The X-Men quelled the riots and picked up a passenger: the Golgotha. Unbeknownst, the parasite nested in the Blackbird and hitched a ride back to the X-Mansion, where it immediately began feasting on their psychic energies and causing madness. Eventually, Emma Frost figured out the two creatures they had encountered were just husks of a smaller, more powerful creature. Despite the dangerous effects of the Golgotha’s power, it was actually quite weak and easily destroyed by the X-Men. 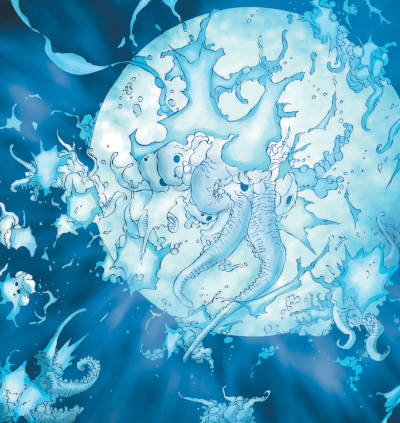 Unfortunately for the people of Earth, that Golgotha was only the first of many. Perhaps it was a scout, leading the rest of its hive, like an ant that leads its colony to food. A horde of Golgotha travelled through deep space towards Earth, but were detected by one of Earth’s space stations. The X-Men travelled to space and dispatched many of the creatures relatively easily. Fortunately for the X-Men, the aliens appeared to possess a hive-like mentality, and the death of so many of their swarm drove the remainder to annihilate themselves. [X-Men (2nd series) #166-170]

Much about these creatures remain shrouded in mystery. Where did they come from? Will they return? What is known is the impact they left on Earth from one single creature; hundreds dead or mentally scarred.