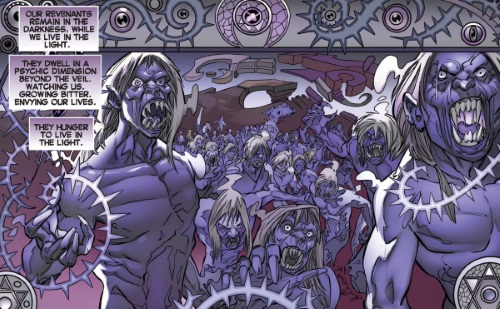 The Mummudrai are immortal, psychic parasites, seemingly created during the birth of every living individual. Born in the womb without a physical form, the creatures fight their living double for control. Most are either killed during this conflict, or are driven into the psychic underworld, though a select few are able to eat their host’s mind and take control of their form. Even fewer still remain dormant within their host living harmlessly.

For those Mummudrai trapped beyond the veil and in the psychic underworld, their ability to possess a host is severely limited. Those that do manage to move into the physical realm have been seen to possess a host and create a corrupt, physically powerful version of that host. The results of that corruption can vary wildly, though they are always a “dark mirror” of the host. The Mummudrai’s form is not just a dark reflection of their host but a reflection of the paths they could have taken in their life. 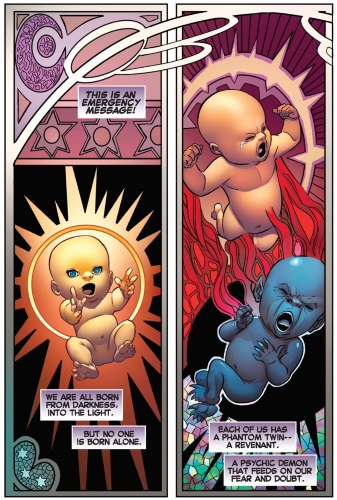 One small subset of Mummudrai, known to humans as Bull Revenants, don’t need a host at all, instead being able to create a physical form from sheer force of will.

As psychic entities, Mummudrai are essentially energy lattices and are thus vulnerable to electromagnetic pulses. In one future, ravaged by hordes of Mummudrai, humankind engineered various weapons to fight against their foes, or protect themselves. The glotus parasite somehow shielded its host from detection by Mummudrai, and its gland also produced a substance called envenom, which caused severe burns and pains to Mummudrai.

In Shi’ar culture, the Mummudrai are considered the anti-self, a dark mirror that everyone faces before being born. This conflict is every sentient being’s first encounter with the alien and unknown, likely contributing towards people’s fears of what they don’t know. [New X-Men (1st series) #126]

Few have knowingly encountered a Mummudrai, though the Shi’ar have captured and experimented on at least one creature. [X-Men (2nd series) #198] 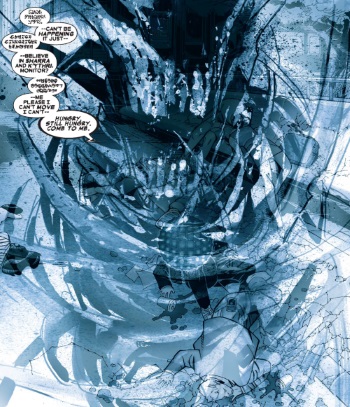 Hundreds of years ago, the Shi’ar were at war with the Heptarchy. Desperate for new weapons against their foes in this losing war, their scientists captured and extracted a Mummudrai and studied it intensely.

With the knowledge gained from the Mummudrai, the Shi’ar were able to create a powerful weapon known as the Hecatomb. Essentially an artificial Mummudrai, the Hecatomb would be dropped on an enemy world, where it would wipe the minds of everyone present but leave the planet itself unharmed.

However, the design of the weapon was flawed. The first time it was used, the Hecatomb absorbed eighteen billion minds, but all awoke within the matrix that was meant to erase them. When the Shi’ar attempted to switch the weapon off, it was enraged and broke free of its creators.

Meanwhile, the Mummudrai that was used as a template for the Hecatomb, El Teel Urizen, escaped and fled. As Urizen was the most familiar psychic “scent” to the Hecatomb, the creature hunted him relentlessly for hundreds of years, consuming every mind along the way.

When Ev Teel Urizen reached Earth, he hid within the mind of the mutant Lady Mastermind. The 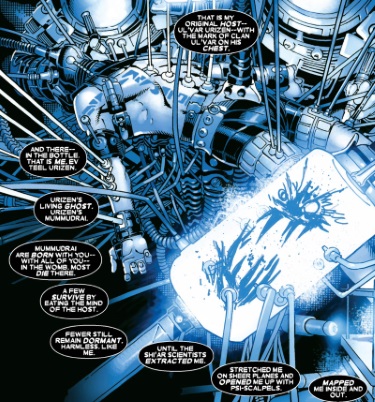 Hecatomb arrived soon after and ravaged the island nation of Providence. The X-Men fought futilely against the massive storm of psychic energy, with Cable even merging with Ev Teel Urizen to gather enough power to face down the beast. Despite this, Ev Teel was absorbed by the Hecatomb into its collective.

Ultimately, the Hecatomb was defeated by the X-Man Rogue, who absorbed the billions of minds that made up the creature into herself. Without any psychic energy, the Hecatomb was reduced to a lifeless core, which the X-Men destroyed. [X-Men (2nd series) #197-199, Cable and Deadpool (1st series) #40-41]

Revenants and the Great Corruption

While Mummudrai are generally rarely seen, in the distant future of the 64th century the creatures had nearly wiped mankind from existence. Thousands of years earlier, the Mummudrai Cassandra Nova instigated the Great Corruption, which broke down the barrier between the psychic underworld and the physical plane.

Known as Revenants to mankind, Mummudrai ran rampant, infecting humans and stealing their 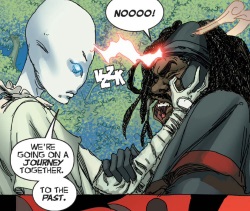 forms. Over the next three thousand years, Revenants reduced mankind to a mere handful. A select Order arose and trained in the specialist arts or hunting and killing Revenants.

When the timer travelling X-Man called Bishop joined the Order, Cassandra Nova, saw an opportunity to wipe out humanity once and for all. She possessed the mutant and used his time travel technology to return to the 21st century, intending to instigate the Great Corruption a thousand years earlier than she had previously.

After possessing a powerful psychic host, Nova, going by the Revenant Queen, enacted her plan to create the Great Corruption. She built a small army of Revenants, using her own blood, and clashed with X-Force, creating Revenants from three of them. When she sacrificed a telepath, the Great Corruption was enacted, and the walls between the physical plane and the psychic underworld were shattered in the city of Los Angeles. 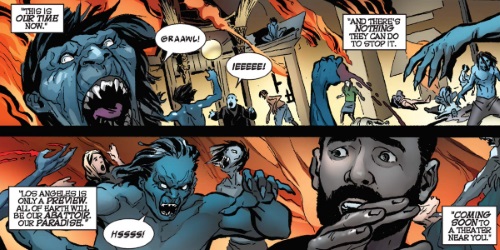 The city was flooded with Revenants, created from its citizens, and chaos ensued. Blood spread across the moon, symbolizing the Great Corruption, and when the moon was fully covered in blood the barriers between the planes would remain shattered forever. X-Force fought valiantly 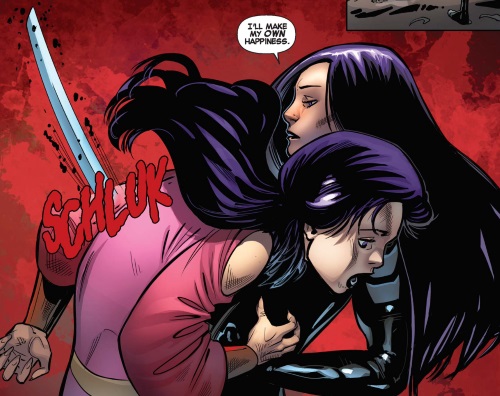 against the Revenants and managed to reverse the Great Corruption by killing The Revenant Queen, while she was possessing Pyslocke’s Revenant.

While this future version of Cassandra Nova was slain, it’s entirely possible that the present day version of Nova, still trapped within her psychic prison in the alien Stuff, will create the dystopian future experienced by Bishop. [Uncanny X-Force (2nd series) #1-6, #10-15]

Perhaps the most famous Mummudrai, Nova was the dark twin of Charles Xavier, the most powerful mutant mind on Earth. Even in the womb, Charles sensed the evil of his twin and attacked her psychically, killing her physical form. Nevertheless, her psychic essence clung to a sewer wall for forty years until she could create a physical form her “brother’s” DNA. Seeking revenge, Nova set out on a quest to destroy her brother’s life. First, she slaughtered sixteen million mutants on Genosha using wild sentinels. Next she possessed Charles, trapping his mind within her own form, which she had crippled. Is her brother’s body, she outed him and his school to the world as mutants and tortured his X-Men before setting off to the Shi’ar Empire. In Space, she decimated the Shi’ar by controlling the Shi’ar Empress Lilandra. Upon she returned to Earth to finish what she started, the X-Men managed to trick her into transferring her mind into the protoplasmic Imperial Guadsman known as Stuff. Once inside, she was trapped.

A future version of Cassandra Nova, the Mummudrai enacted the Great Corruption and unleashed Mummudrai, or Remnants on the world. Dubbing herself their queen, she ruled for three thousand years until she possessed Bishop and travelled to the 21st century to create the Great Corruption early. She almost succeeded, but was ultimately killed by X-Force.

A rare Mummudrai that lived dormant within its host mind, Ev Teel Urizen’s existence was discovered by Shi’ar scientists. The entity was forcefully removed from its host and put through torturous tests, the result of which was the creation of a devastating weapon: the Hecatomb. When Ev Teel Urizen escaped and fled, the Hecatomb hunted it, since it knew the Mummudrai’s psychic scent best of all. Ev Teel fled to Earth and hid within the mutant Lady Mastermind until the Hecatomb eventually found them. The Mummudrai bounded with the X-Man Cable to face the beast, but was ultimately consumed by the Hecatomb.