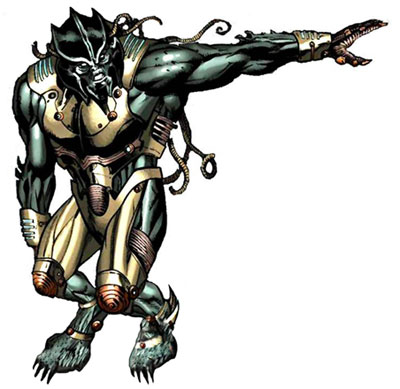 The Scy’ar Tal are a humanoid species with insect-like traits, such as a hive-like mind and both an endoskeleton and a thick, black exoskeletons. All members of the species appear to be identical: they have ridged heads and prominent cheek plates and are seemingly exclusively male.

The Scy’ar Tal are a patriarchal society. They select a leader seemingly at random through an undefined process involving the sharing of lifeforces. Their leader, the Eldest, is imbued with the energy of his people, granting him vast strength, near invulnerability, an enhanced physique and energy projection abilities. If an Eldest is slain, another is immediately selected.

Thirteen thousand years ago, the race known as the M’Kraan discovered "the World," the planet that housed the M’Kraan crystal (which they presumably named after themselves). The space around the planet, however, was inhabited by an unidentified race. Believing the planet to be their own holy land, the M’Kraan forced the current inhabitants out and claimed the planet for themselves. [X-Men: Emperor Vulcan #5] 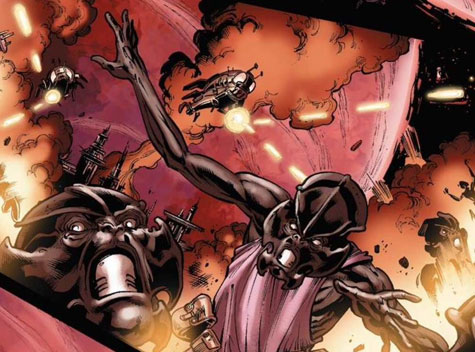 For the next 12,000 years, the M’Kraan resided in small, artificial planetoids in orbit around "the World," developing from an aggressive race into one dedicated to worshipping a god they believed dwelled within the M’Kraan Crystal. One-thousand years before their encounter with Vulcan, in circumstances eerily similar to 12,000 years prior, the Shi’ar discovered “the World” and, believing the M’Kraan Crystal to be their birthright, forcefully expelled the M’Kraan from their home. Unprepared for the Shi’ar’s savage attack, the alien’s artificial planetoids were destroyed, forcing the M’Kraan to flee in a mass exodus. [X-Men: Emperor Vulcan #2]

Because the patriarch of the M’Kraan, the Eldest, was mortally wounded during the attack, a new Eldest was selected from the people during a ritual. 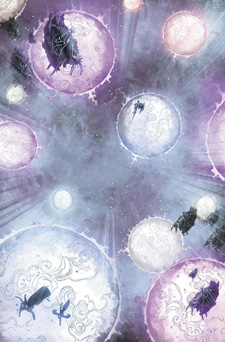 For the next 1,000 years, the M’Kraan dedicated themselves to developing their technology and reshaping their society with the sole purpose of destroying the Shi’ar. Their dedication to their cause extended to the point of renaming their own species “Scy’ar Tal,” which translated to “Death to the Shi’ar.”

The Scy’ar Tal developed "Finality," a massive space station with advanced warp technology capable of teleporting whole suns over great distances. They then used Finality to cultivate a stockpile of suns in a “solar nursery,” ready for their attack on the Shi’ar. [X-Men: Emperor Vulcan #3]

They chose the most opportune time to launch their attack on the Shi’ar: during a civil war between Lilandra’s rebels and Vulcan’s loyalist forces. The Scy’ar Tal first struck during a battle between the rebels and Vulcan’s forces in orbit above the world of Feather’s Edge.

Vulcan’s flagship was destroyed in the initial assault, though the mutant emperor survived and, alongside Gladiator, initiated a fight with their attacker’s leader, the Eldest.  The Eldest considered them to be not true Shi’ar and gave them the opportunity to flee. The pair, however, instead attacked. The Eldest proved too powerful for the pair, resisting Vulcan’s energy attack and breaking Gladiator’s arm. 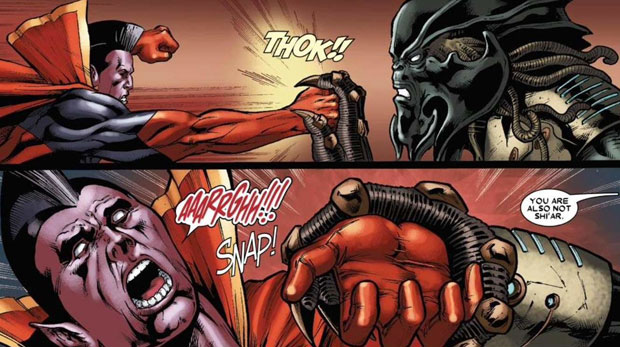 Havok and Marvel Girl contacted the Eldest telepathically in an attempt to facilitate a peaceful resolution. Recognising the power of the Phoenix within Marvel Girl, Eldest showed her his people’s history before launching a homing beacon at Feather’s Edge. 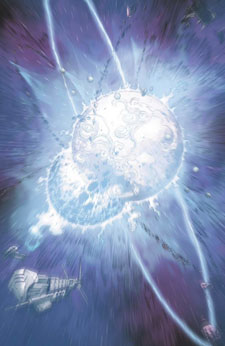 The homing beacon initiated a warpgate over the planet, dropping a sun on top of Feather’s Edge, completely annihilating it and killing 2.4 billion Shi’ar. The Scy’ar Tal then left the system and headed directly to "the World," leaving the stunned Shi’ar to pick up the pieces. [X-Men: Emperor Vulcan #2]

The Scy’ar Tal’s attack forged a temporary alliance between the rebels, led by Lilandra and the Starjammers, and Vulcan’s forces. Lilandra’s fleet went in to battle with the Scy’ar Tal over the World while the Starjmmers, Vulcan and the Imperial Guard attacked Finality.

Vulcan, Gladiator and Havok engaged the Eldest in battle at Finality, killing him in a combined assault. The Scy’ar Tal immediately imbued a new Eldest with their power; however, Vulcan recognised the connection between the people and their leader and used his abilities to steal power from the Eldest. With their connection to their leader broken, the Scy’ar Tal were confused and panicked, quickly turning the tide of the battle in favor of the Shi’ar. [X-Men: Emperor Vulcan #4]

Now holding control over Finality, Vulcan used the superweapon to drop a star directly on top of the Scy’ar Tal fleet at the World, annihilating it. [X-Men: Emperor Vulcan #5] It is unknown whether any Scy’ar Tal remain or if the entire species was wiped out as a result of Vulcan’s devastating attack.