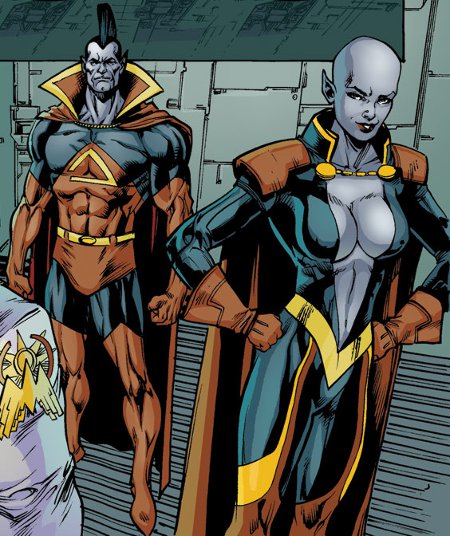 The Strontians are a race of powerful humanoids from the Shi’ar Imperium. Like a lot of species in the universe, they share many similarities in appearance to humans, though their most alien visual trait is their purple skin. Hair color is almost exclusively black or dark purple, though red hair has also been observed. Several representatives of the race have also been known to possess very distinctive hairstyles, similar to an Earth Mohawk, though it is unknown if this is a style or if their hair grows this way on its own.

The most distinctive feature about the Strontians is their incredible, psionically fuelled physical abilities. A single ordinary Strontian can decimate an army. Each Strontain possesses strength, speed, stamina, reflexes and agility at extraordinary superhuman levels. In addition to this, they also possess the power of flight, intense heat eye beams and superhuman breath.

A select few representatives of the Strontian species have been selected to undergo the Gladiator process. The details of the process are largely unknown; what is known is that it increases the subject’s already incredible abilities greatly, as well as allowing them to survive and travel in space. However, the process takes a toll and only the young can survive it.

Kallark, aka Gladiator, is the only confirmed surviving Strontian to have undergone the gladiator process, though it is likely both his cousin Xenith and son Kubark have also been subjected to it, given both have been sighted operating in the vacuum of space. [War of Kings: Warriors #1]

While the upper-most limits of a Strontian’s strength are unknown, gladiator-enhanced Strontians have proven to lift in excess of 100 tons. For instance, Kallark has been sighted lifting the entire 35 story Baxter Building. Further to this feat, Gladiator has also been observed destroying entire planets. [Fantastic Four (1st series) #249-250, Marvel Comics Presents (1st series) #49]

A gladiator-enhanced Strontian also possesses extreme durability, to the point that they can withstand massive explosions and even swim through the fires of a star completely unharmed. [Marvel Comics Presents #49]

In addition to strength and durability, the gladiator process takes a Strontian’s natural ability of flight and enhances it to the point they can travel at faster than light speeds. Additionally, their improved durability and lung capacity allows them to survive for greatly extended periods in space, without the need for a space ship.

This incredible set of abilities is balanced by a great weakness: a Strontian’s powers, including those that have undergone the gladiator process, are directly tied to their self-confidence and the strength of their convictions. If a Strontian loses confidence in him or herself, even briefly, it can result in a dramatic loss of strength and durability. 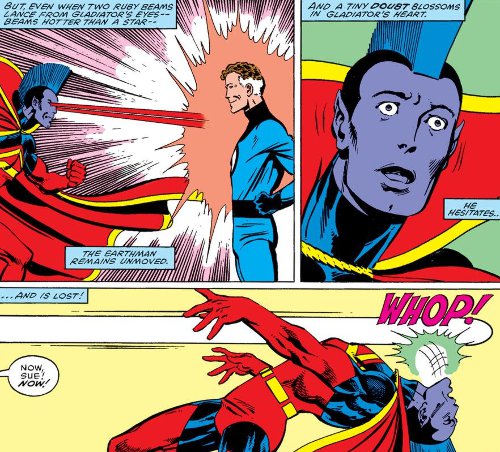 For example, Gladiator himself, who has gone toe to toe with Thor and Silver Surfer, was defeated in battle by the Fantastic Four and even the X-Man Cannonball due to a lapse in confidence, and other Strontians doubting themselves have succumbed to simple blaster fire. As their confidence psionically reinforces their abilities, psionic dampeners have been known to temporarily weaken a Strontian’s abilities. [Uncanny X-Men (1st series) #341, War of Kings: Warriors #1]

In addition to their reliance on their confidence, Strontians are also vulnerable to magic, certain forms of radiation and psychic attacks. However, their level of weakness is directly proportional to their level of confidence. 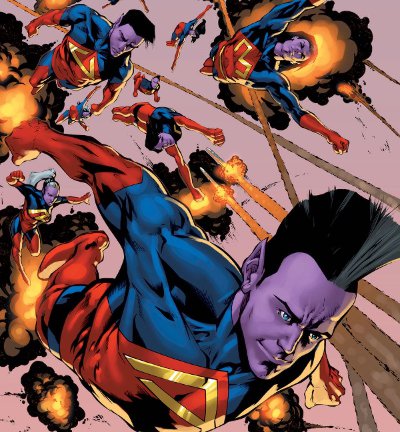 Hailing from the planet Strontia, the Strontians were a noble race that valued honor and duty above all else. Little else is known about Strontian culture, but what is known is that the race was once ruled over by a Council of Elders, who worked to instil that dedication in their people and maintained fealty with the Shi’ar Imperium. The study of sorcery was strictly forbidden by the Elder Council, likely due to their people’s sensitivity to it. However, select individuals were permitted by the Council to practice the art for use in training warriors. [War of Kings: Warriors #1]

Centuries ago, the powerful race was ravaged by the Wraith Plague, and their salvation came in the form of the Shi’ar Imperium. The Shi’ar cured the plague and, in return, the Strontians swore unending loyalty to the throne. [War of Kings: Warriors #1]

One generation later, Shi’ar Majestor T’Korr decreed the formation of the Imperial Guard, partly to combat the threat to the Phoenix host Rook’shir, and that each race in the Imperium was to send its finest warrior to join it. To the Strontians, to represent their race in the Imperial Guard was the highest honor. The Elder Council subjected a select group of their finest young warriors to a series of trials, narrowing the group down to a final handful of promising candidates. The final roster of young warriors had their naturally powerful abilities greatly enhanced through the gladiator process. [War of Kings: Warriors #1, Uncanny X-Men (1st series) #479]

The Council of Elders deferred setting the final trial, and the selection of their Imperial Guard representative, to Shi’ar Majestor T’Korr himself. T’Korr was untrusting of the Strontian people, believing such a powerful race could threaten his throne. In particular, he was concerned about the Council of Elders and issued the candidates with a moral dilemma: as their final test, they had to kill the Council of Elders. 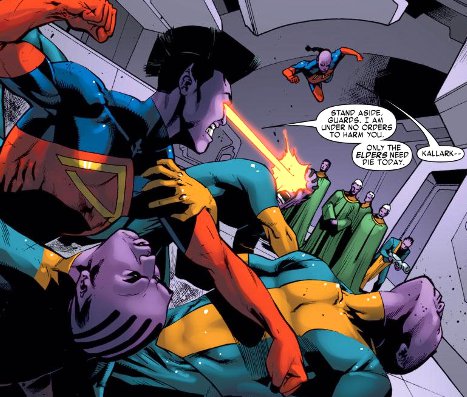 The majority of the candidates complied, due to their feeling of duty to the Majestor, though most fell in the attempt due to their conflicted feelings affecting their abilities.

Only candidate Kallark remained steadfast in his dedication to the Majestor’s directive, slaughtering the Council. It was revealed that the Elders had struck a bargain with T’Korr to prove their loyalty. If all the cadets had refused T’Korr’s order, he would have activated a starcracker next to Strontia’s sun, sending it nova and destroying their world. The Council of Elders had informed only Kallark, their most promising candidate, of this deal, ensuring their own death’s to save their people. Only after killing the Council did Kallark destroy the starcracker. Proving his loyalty, Kallark was named as praetor (leader) of the newly formed Imperial Guard. [War of Kings: Warriors #1]

Sometime in the centuries following this event, Strontia and almost the entire Strontian race, was destroyed. The details behind how this came about are unknown. Possibly, one of T’Korr’s descendants did not trust the Strontian’s as much as he did and followed through on their ancestor’s starcracker threats. All that is known is that Gladiator’s cousin Xenith and his son Kubark are the only confirmed survivors of their race, with Gladiator himself having been recently killed during an attack on Earth.

Praetor of the Shi’ar Imperial Guard for centuries; Kallark served the throne with devout loyalty, no matter who sat on it. When Vulcan usurped the throne from Lilandra, he steadfastly served the new Emperor, until she was to be executed. Kallark rescued the deposed Majestrix though she was killed anyway. After Vulcan’s death and the defeat of the Shi’ar by the Kree, Gladiator himself was named Majestor by the Kree leaders, the Inhumans. Kallark lead the Shi’ar through trials such as an extra-dimensional invasion from the Fault and the universal threat of the Builders. Upon realizing Earth was the epicenter of the decay of the universe, the Galactic Council, including the Shi’ar, attacked the Earth. Gladiator, and his fleet, were seemingly killed in Earth’s retaliation.

Xenith is the cousin of Gladiator. She was a member of the Cosmic Commandoes, working for the Charter, before defecting and forming the Star Masters with Quasar, Beta Ray Bill, Silver Surfer and the Skrull Morfex. She was later imprisoned by the Shi’ar for an unknown reason, until being pardoned by Vulcan to lead his Praetorian Guard. She and her Praetorians were later arrested and incarcerated by the Nova Corps for war crimes.

Current Status: In training at the Jean Grey School for Higher Learning.

The son of Gladiator. The identity of Kubark’s mother or the story of his origin is unknown. He was sent to Earth and enrolled in the Jean Grey School for Higher Learning by his father as punishment for destroying half of Chandilar’s royal city for fun. After bonding with his classmates and experiencing some adventures, he was later removed from Earth by his father, due to the Phoenix returning to Earth. After briefly training at Supergaurdian school in Shi’ar space he eventually returned to the Jean Grey School.