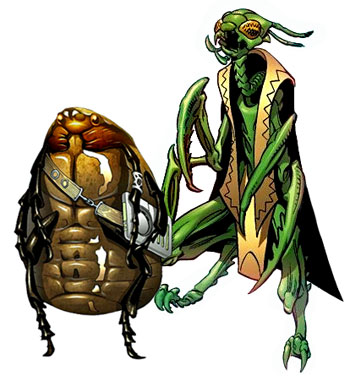 The Timebreakers are an insect-like race with a distinct two-caste hierarchy. Members of the Worker caste are beetle-like, standing approximately two feet tall with a brown exoskeleton. The Workers undertake the menial duties for their race, including maintenance of the Timebreaker’s home, the Panoptichron, and are often seen wearing a belt diagonally across their thorax, on which various tools of their trade can be clipped.

Meanwhile, members of the mantis-like Sovereign caste act in a leadership role, largely responsible for supervising the repair of the multiverse from the command room of the Panoptichron. Unlike the Worker caste, whose sole clothing is a functional belt, the Sovereigns have been known to wear yellow robes or a small golden chest piece. 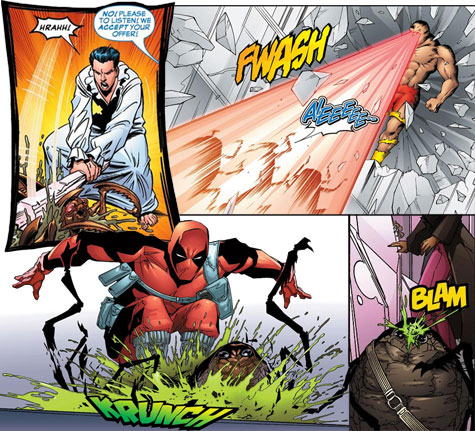 Genetically nonviolent, the Timebreakers lack the inclination for physical force; even if they wanted to cause someone harm they wouldn’t be able to. Coupled with a physically weak anatomy, the insect-like aliens seem made for a pacifistic life of scientific research and exploration.

The Timebreakers lack the concept of individual names, instead recognizing each other through scent. They do, however, also communicate through an unknown alien language, as well as speak fluent English. This grasp of the English language allowed them to communicate clearly with the Exiles, their agents/allies in repairing the multiverse, though they still struggled with the concept of names. Often they would refer to their human allies by numbers and categories rather than their names, such as “Exiles-Casualty-Five”, but they were known to use their actual names from time to time, particularly after spending an extended period of time with the Exiles.

Little is known about the origin of the race known as the Timebreakers, not even the actual name of their species. It is entirely possible their species lacks an actual name, since the race does not grasp the concept of individual names. The name “Timebreaker” was a moniker first mentioned to the Exiles by the Celestials in an alternate reality, which they adopted once they met the bugs. [Exiles (1st series) #53] 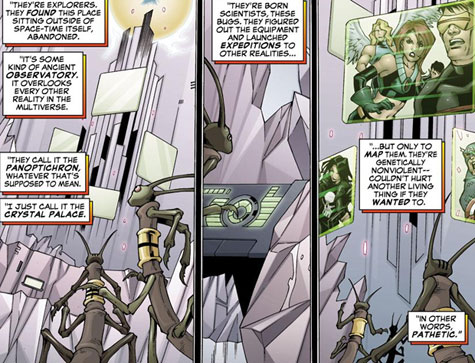 What is known is that the Timebreakers were a pacifistic race of scientists and explorers who at some unknown point in the past discovered a dimensional observation station outside of time and space. Their scientific curiosity spiked, the Timebreakers named the station the Panoptichron and soon commenced expeditions to map alternate realities.

Unfortunately, the Timebreakers overestimated their understanding of the Panoptichron’s technology: just as their expeditions began to become routine, something went wrong. It is unclear what exactly happened but the Timebreaker’s actions subsequently damaged the multiverse on a massive scale, earning them their name.

In order to undo the damage they had inadvertently caused, it was necessary to travel to various alternate realities and set them back on their correct path. Unfortunately, this would often require physical and violent work that went against the Timebreakers' very nature. [Exiles (1st series) #63]

Using the technology of the Panoptichron, the aliens recruited two teams of superhumans, the Exiles and Weapon X, from across the multiverse to act as agents on their behalf.  In order to ensure compliance, the Timebreakers concocted the lie that each member had become unhinged from time and had to repair damaged realities in order to go home. To avoid having to interact with the teams directly, the Timebreakers designed a holographic interface, with an appearance shifting to be most appealing to each team. For the Exiles they saw a benign butler, whereas Weapon X saw a sexy business woman. The interface, named the Timebroker, claimed to be a combination of the team's collective consciousness so they would not suspect any greater power was pulling their strings. [Exiles (1st series) #1, 63, Exiles: Days of Then and Now] There was no malice behind the Timebreaker’s manipulation and endangerment of these teams; their sense of duty to repair the multiverse appeared to overrule whatever sense of right of wrong they may have. 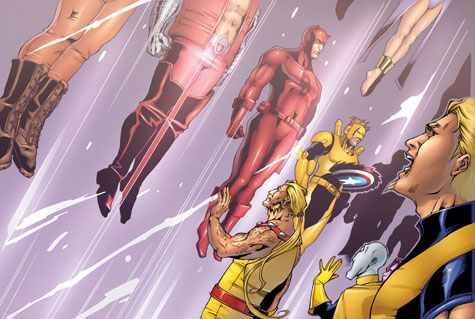 Things went well for a while, with both teams repairing reality after reality. There were casualties along the way, and in order to avoid further damage to the timestream, the Timebrokers would retrieve each corpse and return them to the Panoptichron. The Worker caste would then place each body within the crystal walls of the Panoptichron, like a display wall. It is unknown why they did this rather than simply sending the bodies back to their home dimensions or destroying them, but some members of the Exiles and Weapon X have speculated the aliens felt guilty for their actions and were displaying the bodies as a “Hall of Shame.” [Exiles (1st series) #63]

This approach to managing the dead eventually proved their undoing when the temporarily deceased Hyperion regenerated from his severe injuries and escaped the crystal wall. 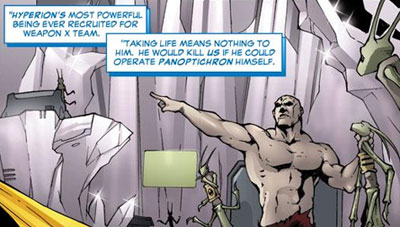 Being pacifists, there was little the Timebreakers could do to resist Hyperion, who quickly took over operation of the Panoptichron and used it to get revenge on the Exiles who had defeated him. [Exiles (1st series) #62-65]

Whilst being unable to fight back physically, the insects used their intelligence to fight back against their oppressor in other ways. Temporal scanners advised them Beak had a high probability to defeating Hyperion so they placed him on the team. Eventually the Exiles found their way to the Panoptichron, where Beak proved integral to freeing the Timebreakers from Hyperion. [Exiles (1st series) #62-65]

With Hyperion gone and the Exiles in the Panoptichron, things changed for the Timebreakers once again. The Exiles took control, though with much less hostility than Hyperion. The Timebreakers, grateful for being saved, did everything the Exiles asked, including assisting with their efforts to heal members of the team injured in the fight with Hyperion. They did however voice objections to interfering with worlds that didn’t require it, and encouraged the team to return to fixing damaged realities. [Exiles (1st series) #66-69] 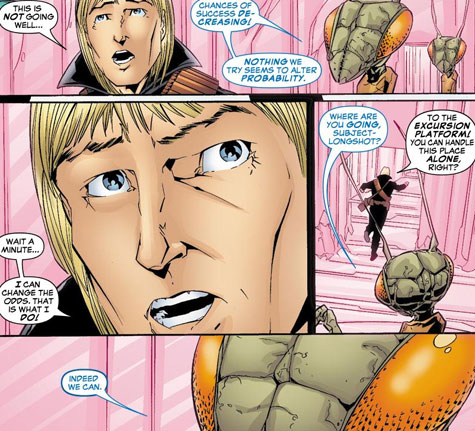 Their frustration grew as they assisted the Exiles with hunting the villain Proteus across realities. The Timebreakers observed that the Exiles damaged each reality they passed through in their pursuit of Proteus. Each time the Timebreakers informed them of this, the Exiles ignored their objections. Eventually this frustration reached breaking point. Having learned during their time with the humans that they could not force the Exiles to comply, the aliens knew they could only teach them consequences of their actions. They manipulated the team into leaving the Panoptichron unattended and essentially abandoned them on Heather Hudson’s world.  [Exiles (1st series) #77, 83-84]

Whilst extremely intelligent, the Timebreakers unfortunately lacked the ability to improvise or think outside the box. Without the Exiles, the Timebreakers failed on their first mission: sending wave after wave of alternate Wolverines into a damaged reality because their temporal scanners advised them Wolverine was the answer. Eventually the aliens accepted they were mistaken in “firing” the Exiles and returned them to the Panoptichron. The Timebreakers reached an agreement with their human allies that they would start trusting each other. [Exiles (1st series) #85-87]

After this, the Timebreakers and the Exiles seemed to find a balance, working together to fix damaged realities. The Sovereign caste acted primarily as assistants to Heather Hudson in coordinating missions and identifying realities for repair.

Despite interacting with humans for some time, the aliens were still ignorant to many aspects of human comfort.  For example, the lighting in the Panoptichron had always been bright and insufferable to the Exiles, until Power Princess demanded it be changed. The Timebreakers complied without hesitation, adjusting the lighting to better suit the human visual spectrum.

Their reasoning behind never changing it was that the Exiles never asked. [Exiles (1st series) #78]

Furthermore, the insects often showed a pragmatism and ruthlessness that set them apart from the Exiles. When Proteus’s activities on Counter-Earth threatened the destruction of the 616 universe, their temporal scanners recommended destruction of the planet, and everyone on it. The Timebreakers were in support of the notion, but the Exiles were not. [Exiles (1st series) #81]

Their ignorance of human needs eventually resulted in their departure from the Panoptichron and an end to their mission repairing the damage that had wrought. During a routine mission to Earth-1720, the universe was seemingly destroyed (though this was only temporary). 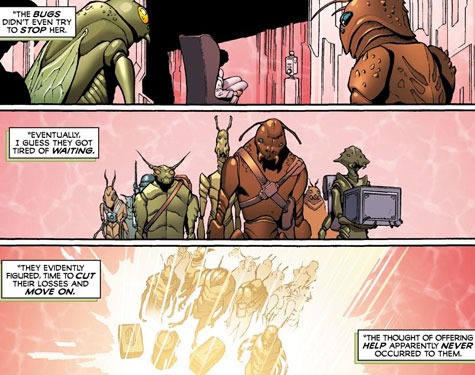 Heather Hudson, believing her friends had died, broke down, locked herself in her room and started drinking. Perhaps the Timebreakers didn’t understand, or just didn’t care, but trying to help her didn’t seem to occur to them. Instead, they left her to her self-destruction and waited.

Perhaps out of fear, or perhaps out of deference to Heather, the Timebreakers did not attempt to recruit another team of Exiles  Eventually they gave up on any change in Heather and packed up all their equipment, leaving the Panopitchron for good. [Exiles (1st series) #96]

Why they left is unknown; there were still damaged relativities and the Timebreakers' sense of duty to repair them had always been strong before. It is possible the aliens felt they were in an impossible situation: they could not bring new Exiles to the Panoptichron for fear they would take over, but they also could not revert to their old methods of manipulation, either due to Heather’s presence or because of their own ethical growth.