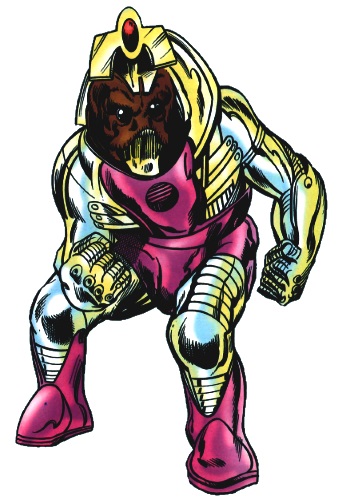 The Z’nox are a warmongering species of reptilian bipeds.  Representatives of the species are physically strong, with two arms and legs and five taloned fingers and toes. Their skin is thick and tough, in varying shades of brown.  All members of the species posses frog-like heads with prominent red, yellow or black eyes, a flat nose and a large mouth full of long sharp teeth.

The Z’Nox originated within the Andromeda Galaxy.  Evolving completely lacking compassion, they dedicated themselves plundering and enslaving the galaxy, perfecting the technique of conquest.

About a thousand years ago Z’Nox scientists created the ultimate weapon; a gravity transformer drive strong enough to move their planet anywhere in the cosmos. With their planet now mobile, and able to use its vast gravitational forces as to wreak havoc on rival worlds, the Z’Nox cut a swath of devastation across the universe. 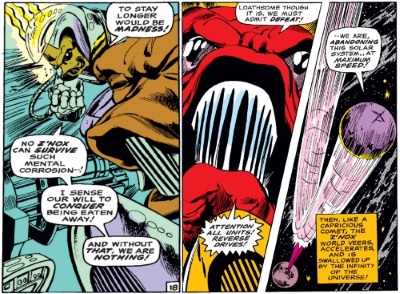 Eventually, the aliens set their sights on Earth. However their approach was detected early by the telepathic mutant Charles Xavier, who prepared in solitude for months leading up to the alien’s arrival.  When the Z’Nox’s world reached Saturn, they sent a scout ship to Earth’s South Pole to act as a homing beacon for their planet.  The ship was promptly intercepted by both S.H.I.E.L.D. and the X-Men, though only the X-men managed to infiltrate the ship. Once inside the ship the X-Men enacted the plan long prepared by Charles Xavier. The telepath focused the compassion and kindness of the entire planet and channelled it through his X-men.  Unable to comprehend this emotional attack, the Z’Nox redirected their planet away from Earth, retreating. [X-Men (1st series) #65]

While the Z’Nox planet fled from Earth the scout ship remained. Many Z’Nox on the ship were killed in the attack, though one survived went into hiding on Earth. HYDRA acquired some several of the Z’Nox’s corpses for use in their experiments.  In addition HYDRA acquired a deadly virus, which the Z’Nox had brought to Earth as a backup in case they failed in their invasion. When a trio of paramilitary agents were sent in to destroy the facility, one went rogue and stole a vial of the pathogen. He planned to sell it back to the one surviving Z’Nox but things went wrong, resulting in the pathogen being released, killing dozens and mutating his body. [Amazing Spider-Man (2nd series) #23]

While the X-Men had successfully driven the Z’Nox away from Earth they continued to cut a swath of conquest across the rest of the galaxy.  The X-Men and the Fantastic Four attacked the Z’Nox world and through the machinations of Mr Fantastic the rogue alien world was directed through a portal into the dimension between the universe and the Negative Zone.  While the Z’Nox world, and millions of Z’Nox, were now trapped other Z’Nox remained free on other worlds. [X-Men: The Hidden Years #8-9] 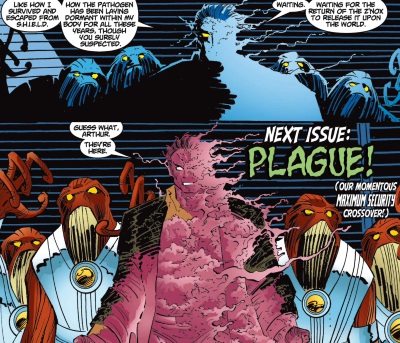 When the Galactic Council decreed that Earth would become a maximum security prison for alien criminals several Z’Nox criminals were sent to the planet. They discovered Senator Stewart Ward, the paramilitary agent that had been mutated by their pathogen years, and helped unlock the virus within his system.  Ward was a corrupt man and happily worked with the Z’Nox, so long as he could save himself.  Spider-Man averted a planetary epidemic, by pumping an antidote into the mutated Ward, transforming him into a curing mist.   After the Galactic Council overturned their decision to make the Earth a prison the Z’Nox criminals were seemingly relocated. [Amazing Spider-Man (2nd series) #23-24] 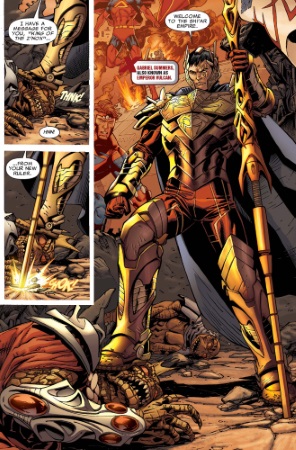 At an unknown point in the past the S’thalin family defected from the Z’Nox empire. Enlisting S.W.O.R.D’s aid they entered the alien resettlement program, being placed in a home in Alaska in exchange for information on Z’Nox operating procedures. Later, the family were forcibly removed from Earth as part of Henry Gyrich’s mass deportation of extra-terrestrials from the planet. They were presumably returned to Earth when Abigail Brand took control of S.W.O.R.D back. [S.W.O.R.D. #2]

At some point the Z’Nox either freed their planet from the Negative Zone or colonised a new one and named it after themselves.  Unfortunately for them the fell victim to the Shi’ar empire’s latest campaign of aggressive expansion.  Their planet’s defences promptly fell to the overwhelming might of the Shi’ar fleet and the King of the Z’Nox found himself under the boot of Shi’ar Emperor Vulcan himself.  The Z’Nox were absorbed into the Shi’ar empire. [X-Men: Kingbreaker #1]