BY THE POWERS OF GREYCROW

BY THE POWERS OF GREYCROW

The mutant powers of John Greycrow are like a game of telephone that circled back around and confused even the original storyteller.

When Scalphunter was introduced as field leader of the Marauders during the Mutant Massacre, he was identified as a mutant. However, no explanation was given for what powers he might possess. Even the typically loquacious Chris Claremont (his creator) gave no narration or dialogue outlining his powers. Scalphunter was just a guy with guns who shot people. The one unique aspect of his combat style was a costume covered with technological components (specifically called "weapon modules" in UXM #219), which he removed and quickly assembled into different firearms for different situations. The one bit of classic dialogue in his original run of appearances that possibly sounded like a Claremontonian power description was roughly repeated in UXM #219 and UXM #222, indicating that Scalphunter had the POWER to construct any weapon necessary to kill his chosen target. Out-of-universe official sources were equally mum about Scalphunter's powers. The Official Handbook of the Marvel Universe Update '89 acknowledged again that Scalphunter was a mutant, but gave no details about his possible powers.

Years passed, and the internet rose. Several up-and-coming fan sites such as X-Fan and UncannyXmen.Net (*cough*) wrote profiles for Marvel characters and took it upon themselves to infer what Scalphunter's powers might be. It was widely presumed online that Scalphunter was a mutant technomorph, like Madison Jeffries, who applied a mutant power to his weapon modules to psionically shape them from raw materials into his weapons of choice. Eric J. Moreels of X-Fan became a contributor to the Marvel Handbook staff and so, in the Marvel Encyclopedia: X-Men, Scalphunter's technoforming ability became canon.

When Frank Tieri started using Scalphunter in his Weapon X series later that year, however, he ignored all that stuff. John Greycrow was retconed as a soldier from World War II who had been working for Mister Sinister for decades prior to the Marauders. By way of explanation, Scalphunter now had a regeneration factor that healed his wounds and presumably extended his lifespan, the first mutant ability confirmed for Greycrow on-panel. Over time, the technoforming ability would creep into in-canon references, in addition to the regenerating powers.

SO what CAN Scalphunter do, really? Well...

1) Regeneration - The most referenced ability to date, by volume, and the clearest to understand. Scalphunter has a healing factor. He can sustain injuries and recover from them better than any normal man. According to one source (Magneto #6) he might even be able to grow back severed limbs under optimal conditions. Even after suffering fatal injuries and apparently ceasing life signs, he will recover in a matter of hours and life will be restored. (Weapon X #14)

2) Marksmanship - Scalphunter has incredible accuracy with his guns, as a sniper or sharpshooter. His proficiency is SO good, and has often been mentioned in the same breath as his other abilities, that it might actually be a mutant intuitive gift for targeting and accuracy.

3) Technoformation - Technically his first confirmed ability (via the Handbooks), Scalphunter's other official power is subtle enough that it’s difficult to diagram. The best understanding actually comes from the mystical cannibal Bloody Lips who once ATE Scalphunter, gaining his powers and describing them through inner monologue. Scalphunter's technical prowess has a cognitive aspect, like Forge, allowing him to perceive how machines work and how scrap 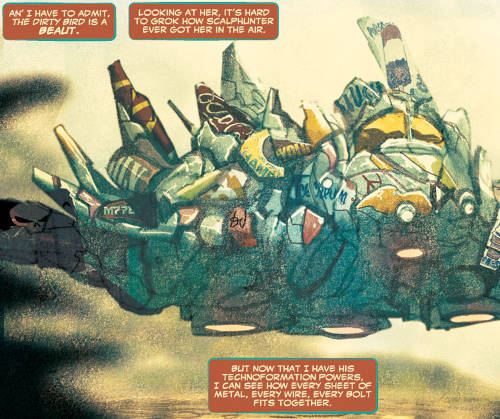 materials might be assembled to make new machines. What's less clear is if he also has a psionic aspect, like Madison Jeffries, that molds scrap materials or reconfigures them in ways that normally could not be done by hand. If he is truly a technomorph, he's a low-level one, as he clearly needs to physically touch his components and cannot affect them remotely through some form of telekinetic assembly.

4) The Mutant Gene for Murder..? - Scalphunter's different abilities were clearly conceived of in a parallel decision making process, but it's possible to bring them together in a way that also links to Claremont's earliest comments on Scalphunter's ability. This is speculation, but it could be inferred that Scalphunter is a mutant who literally has the Power To Kill. While Forge has the mutant power to conceive inventions for most problems he puts his mind to, Scalphunter may have the narrower ability to observe targets and conceive inventions specifically to destroy them. He identifies a weakness, technoforms a solution and has the accuracy to implement it, all drawn from the same mutation. This could even explain how Scalphunter is occasionally suggested to have a primal, undeniable urge to kill...like Sabretooth or Wither, it's literally in his genes.

Bibliography of all references for Scalphunter's powers: