White with no visible pupils

Body unravels into elastic, high-tensile strength coils, congregating around the inter-dimensional void in his chest that displaces matter into a pocket of the Brimstone Dimension and acts as a psychic echo chamber to induce negative empathic sensations and amplify them into the surrounding environment

Nils Styger is a natural born citizen of Genosha and son of the two thousand year old dimension-hopping mutant, Azazel. [Uncanny X-Men (1st series) #402, 431] One of the Neyaphem, a group of mutants banished from our reality during Biblical times, Azazel used his natural teleporting power to return to our reality and father many children by different women, including Nils. Nils’ early life remains largely unknown until he tested positive for the mutant gene and, like all mutant citizens of Genosha, underwent the Mutate bonding process and was forced to become a slave to his own people.

After the X-Men toppled the Genoshan leaders, a new egalitarian government failed to stave off civil war between human and Mutates, and to make matters worse the Legacy Virus ran rampant through the malnourished Mutate population. Nils was one of the Mutates infected with the Legacy Virus. In order to avoid infecting any of his fellow mutants, Nils left Genosha and came to America to work with another Genoshan expatriate, the human scientist Renee Majcomb. Majcomb was a member of Professor Xavier’s Mutant Underground, corresponding with other scientists in an effort to find a cure for the Legacy virus. Nils volunteered to become her protector in order to contribute to the cause. They relocated to an isolated laboratory off the Louisiana bayou so that Renee could carry out her work in peace.

Nils and Renee could not remain hidden forever, though, and were assaulted by the First Strike team, covert agents of the anti-mutant organization known as Operation: Zero Tolerance. The bigots were completely unprepared for Nils’ void and he easily overwhelmed one of their number before Cable and reinforcements from Charles Xavier arrived. 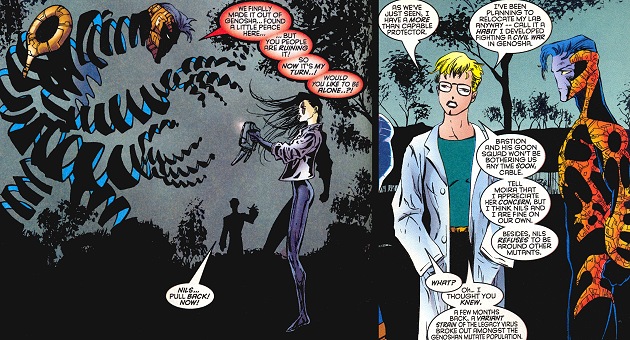 When another member of First Strike tried to take Doctor Majcomb hostage, though, Nils lost his cool and swallowed the OZT operatives into himself. Furious as he was, Nils almost didn’t care when Cable pointed out the cyber-synaptic connection between the First Strikers and their suits meant that exposure to his void could be deadly for them. Still, he managed to restrain himself and expelled the agents before they suffered permanent injury. Renee and Nils moved on after that to avoid any further visits from Operation: Zero Tolerance. [Cable (1st series) #40] 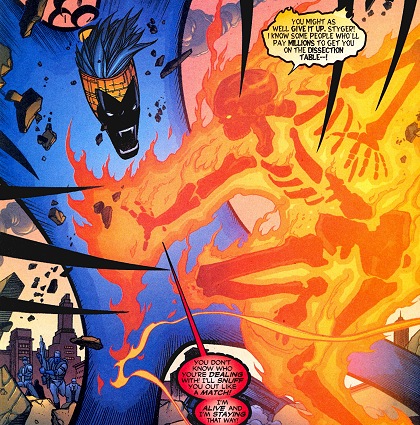 Once the cure for the Legacy virus was found and dispersed throughout the world, Nils left Doctor Majcomb’s care to enjoy his new lease on life. Taking the alias of Abyss, he was in Berlin when a mercenary named Fever Pitch attacked him in public, hoping to sell the Mutate on the black market for dissection. Their struggle caused massive amounts of property damage and drew the attention of Banshee and his X-Corps, a militant organization for policing mutant activity. A strike team from X-Corps managed to bring them down and contain them within energy cells. Abyss and Fever Pitch were brought back to X-Corps’ headquarters in Paris for observation, to catalogue their mutant abilities and to consider them for possible rehabilitation as field operatives. Abyss’s extra-dimensional power proved unstable and unclassifiable, however, prompting X-Corps to keep him in isolation. [Uncanny X-Men (1st series) #402-403]

Although the head of X-Corps science division, Leyu Yoshida, was rather brusque, Nils voluntarily submitted to the testing in order to better learn about his powers. Unfortunately, the necessary containment protocols 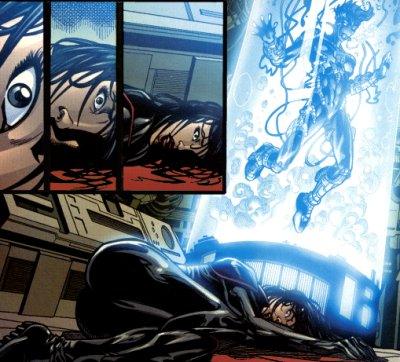 for his powers left him mute, unable to make himself heard outside of his cage. This left Abyss tragically incapable of warning Leyu when she was struck from behind and brutally murdered by a rogue element in X-Corps, led by Mystique. [Uncanny X-Men (1st series) #404]

Mystique’s crew managed to infiltrate the headquarters completely, and she mortally wounded Banshee by posing as one of the Multiple Men. Seeking any help he could find, Cassidy made his way to Nils’s chamber and opened it. Furious after watching Mystique cut down Leyu before his eyes while he was helpless to act, Abyss opened up his void and swallowed the mutant terrorist into his dimensional cavity. The intense pull of his void nearly swallowed Banshee as well, but Nils was relieved that Husk and Jubilee saved their mentor from being pulled in. [Uncanny X-Men (1st series) #406]

Directionless again, Abyss wandered the world for a time until he felt an irresistible compulsion to travel to the Caribbean. He found himself on the Isla Del Demonas with the X-Men’s Nightcrawler and many other mutants possessing teleportation or displacement powers. Caught up in a powerful trance, the mutants arranged themselves in formation and combined their powers, casting open a vast inter-dimensional portal. The X-Men arrived on the scene and attempted to disrupt the process, only for all the participants to be swept up into the portal as it closed. Nils and Nightcrawler were the only portal-mutants who survived the transition and their minds were now clear of any foreign influence. They were all met by the ruler of the hellish dimension they landed in, Azazel of the Neyaphim. Startlingly, Azazel identified himself as the long-absent father of Abyss, Nightcrawler and the mutant compelled into guarding of the portal, Kiwi Black.

Nils’ father explained that he and his Neyaphim, a band of demonic-looking mutants, had been banished into this Brimstone Dimension thousands of years ago by an angelic subspecies of mutants called Cheyarafim, and had been trying to return ever since. Azazel’s personal 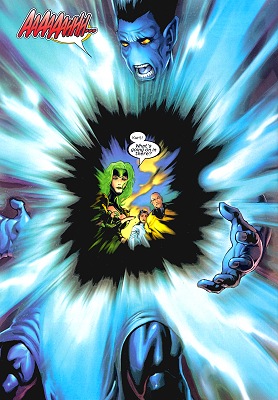 teleporting powers enabled him alone to return to Earth for a brief time periods, and he fathered a horde of children around the globe, hoping to one day use their inherited teleporting powers in conjunction with his own to pierce the void completely and allow the Neyaphim to come home. Indeed, Abyss’s dimensional void functioned in reverse in this Brimstone Dimension - opening up his chest cavity caused things long thought lost to the void to begin shooting out, such as a skateboard, his neighbor’s dog… and Mystique.

Azazel wanted his remaining sons to seek a new path back to Earth for them all, otherwise they could all remain in the Brimstone Dimension for another few decades, or even millennia. Nils and Kurt refused to assist Azazel in reopening the portal but, to everyone’s surprise, the portal in Nils’ chest reopened on its own. Polaris had tracked her missing teammates to the Isla Del Demonas and detected the residual traces of the portal, which she reactivated electromagnetically. Seeing his pathway to Earth open, Azazel attempted to claim Abyss, but Nightcrawler ‘ported him to safety. They reconnected with the rest of the X-Men and, with Polaris’ help, returned to Earth through Nils’ chest. Abyss then turned himself inside-out, closing the portal and stranding Azazel and the Neyaphem in the Brimstone Dimension once more. [Uncanny X-Men (1st series) #429-434] 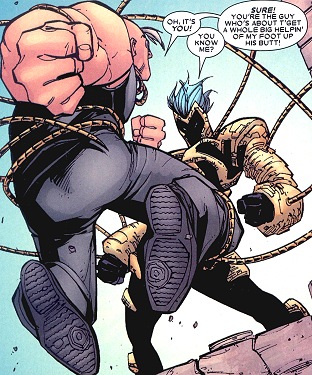 Abyss spent some time at the mansion getting to know his new brothers, Nightcrawler and Kiwi Black, but eventually set out on his own once again. He was one of the countless mutants decimated by the Scarlet Witch’s power on M-Day, losing his mutant gifts. In time, Abyss met Elijah Cross and several other former mutants who organized into an X-Cell to find out what happened to their powers. Believing that the Decimation was part of an anti-mutant conspiracy, the X-Cell began attacking government and military officials, demanding the return of their powers. They were supported by advanced technology provided for Cross by Josef Huber, the Isolationist, who wanted the X-Cell active and causing trouble for his own purposes. Abyss was outfitted with a suit of cybernetic metal coils that simulated the organic tendrils his body used to generate. X-Cell’s terrorist acts drew the attention of the Office of National Emergency, as well as the X-Factor Investigations agency operating in Mutant Town, New York.

After hearing rumors of Pietro Maximoff, Quicksilver, restoring the powers of decimated mutants, Abyss and X-Cell came to Quicksilver’s clinic in Mutant Town. Little did they know that Pietro’s Terrigen-based 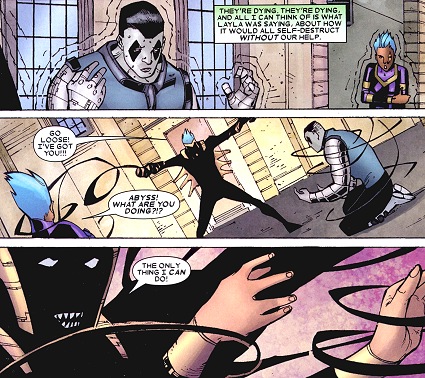 restorations tended to end in the mutant exploding violently as their powers burned out from the inside. Nevertheless, Pietro was willing to engage in trial-and-error with the X-Cell members, attempting a new restoration process by focusing the Terrigen effect through a conduit, in this case X-Factor’s Rictor. Abyss and his teammates Reaper, Fatale and Cross were successfully re-powered by Quicksilver’s efforts and they eagerly went out to test their restored abilities against X-Factor, who were trying to rescue Rictor. Unfortunately, Pietro’s new procedure proved no more effective than the last and Elijah Cross spontaneously detonated in the midst of the battle. Desperate to avoid the same fate, Abyss swallowed up Fatale and Reaper in his void before following in after them. [X-Factor (3rd series) #19-20] 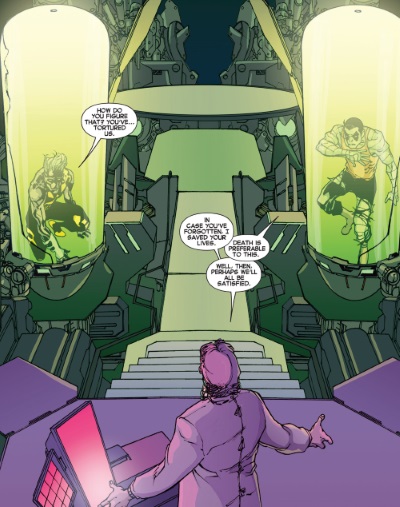 The plan had worked and the explosive effects of Abyss’ repowerment were frozen as long as he stayed in the Brimstone dimension. He, along with Fatale and Reaper, was stuck in the dimension for many months, unable to leave for fear of death. Their salvation came when a brilliant biologist by the name of Dr. Terrance Hoffman pulled them from the dimension and drained the dangerous energies within them.

Unfortunately, Hoffman wasn’t the saviour he initially came across as, as he proceeded to imprison the Abyss and the others and experiment on them. Hoffman was fascinated with the energies they had been plagued with and, after unknown weeks of torture, the three soon started to wish for death. Abyss was saved once again by the newly formed X-Factor team, who had heard that there were some mutants being held captive and had come to investigate. Hoffman proceeded to use the energy from Abyss to turn himself into a super-powered being, but he was defeated by the fledgling X-Factor team. Free of the deadly energies and able to survive on Earth once more, Abyss departed to parts unknown. [All-New X-Factor #1-2] 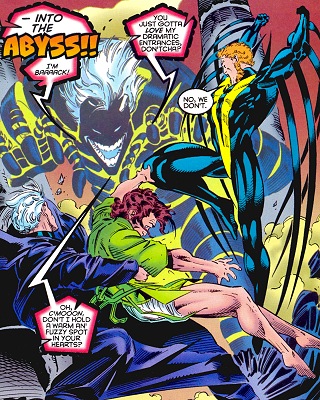 serious followers, but his dedication to mutant supremacy was unquestioned. This Abyss had cultivated his void as a psychic leech, feeding off of the emotions of flatscans he fed to the abyss. His respect for human life was so low that he likened them to sticks of gum that lost their flavor after his void overwhelmed their psyches and rendered them catatonic. Abyss first presented himself to the X-Men when he attempted to stop the Great Human Exodus to Europe. Not one to start small, Abyss kidnapped a child to challenge Quicksilver, son of Magneto, in personal combat. Pietro temporarily overcame Abyss by shoving his undulating body into his dimensional void, forcing him inside-out. They clashed again in the Tabernacle of the Madri, where the X-Men’s ally Bishop was held prisoner. He confronted Quicksilver and Banshee, and goaded the elder X-Man with the fear he sensed inside of him. Banshee was spurred into action by Abyss’ taunts and flew straight into the Horseman’s void. He then unleashed a disruptive sonic cry that tore Abyss apart from the inside, disintegrating his unraveling form for good.