• access to the Brimstone Dimension enables him to teleport, projects paralyzing energy, can disguise his physical appearance, exert influence over the minds of his progeny

Azazel claims to be the devil that is referred to by many religious texts. Stating that he comes from Biblical times, Azazel is part of a race of mutants who are collectively known as the Neyaphem. They originally lived on La Isla des Demonas, an island located in the Caribbean. The Neyaphem believed the Earth was theirs to own and that humans were to be ruled over and used as slaves. However, another group of mutants known as the Cheyarafim were against this and eventually defeated and imprisoned the Neyaphem, including Azazel, in an alternate dimension. Ironically, this dimension, which smelled heavily of brimstone, was the one accessed by Azazel when using his teleportation powers. [Uncanny X-Men (1st series) #433] 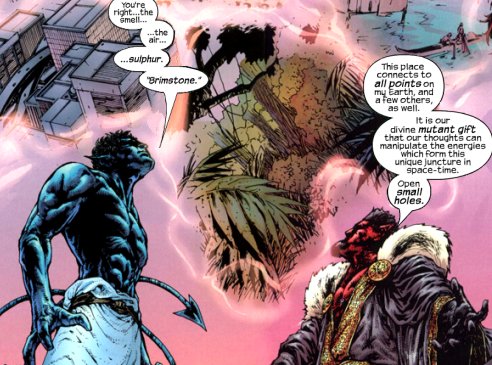 Over the centuries, Azazel learned more about this dimension and his powers to manipulate its energies. Although this gave him the ability to view the Earth, he realized that he would never be able to teleport back to Earth without help from the other side.

At some point in the recent past, the sorceress Margali Szardos accidently created a portal to Azazel's dimension, allowing him to pass through to Earth. Due to his appearance, Maragali believed that Azazel was a demon, a mistake which he used this to his advantage. In exchange for teaching her magic, Azazel was able to visit Earth on multiple occasions. With the ability to visit Earth for short periods at a time, Azazel devised a plan to allow himself and the Neyaphem to return properly and conquer the Earth. On each visit to Earth, he intended to impregnate as many women as possible to spawn a generation of mutants with powers like his own, linked to the "brimstone" dimension. [Uncanny X-Men (1st series) #433] 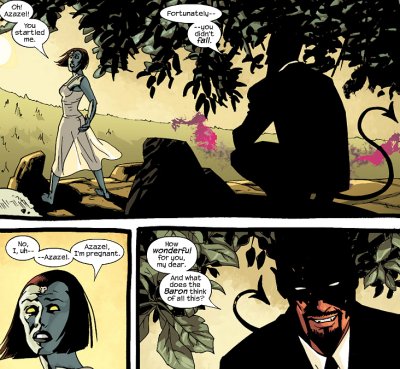 One such woman was the mutant called Mystique, who was living in the guise of Raven Wagner and was the wife of the German baron, Christian Wagner. Although it is unknown how Baron Wagner and Azazel originally met, Azazel was invited to the baron’s home to discuss business between their nations. However, when the baron introduced Azazel to his wife Raven, it was obvious that he was more interested in her than any business relationship. Although Mystique was not entirely innocent herself, Azazel seduced her and she soon fell in love with him. During their short time together, Mystique became pregnant. When she revealed this to Azazel, he coldly told her to raise it as the baron's, revealing he had no real interest in her, just their offspring. With his mission complete, Azazel abruptly left. When Mystique gave birth to his child a few months later, the baby was born visibly mutated. Due to the strain of giving birth, Mystique accidentally revealed her true, mutant appearance and was chased away by an angry mob who believed her to be a demon. Barely escaping, she tossed the baby down a ravine. Azazel managed to save the child and gave it to Maragali, who named the infant Kurt Wagner and raised him along with her own children. [Uncanny X-Men (1st series) #428] 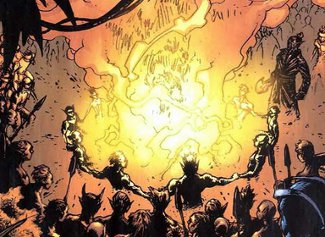 Once enough of his children were fully grown, Azazel subverted them, controlling their minds and forcing them to travel to La Isla des Demonas. Once they had all congregated on the island, a ceremony was performed to open a portal from Earth for Azazel and the Neyaphem to return. As the X-Men had followed one of his “sons”, Kurt Wagner AKA Nightcrawler, they learned of his plans and were able to disrupt the ceremony. Most of Azazel’s children died as the portal collapsed. However, all the survivors including the X-Men were trapped in the dimension. [Uncanny X-Men (1st series) #431]

Azazel took the X-Men prisoner, letting the Neyaphem toy with them while he tried to convert his three remaining sons, Nightcrawler, Kiwi Black and Abyss, to his cause. All three refused to join Azazel and as the X-Men made their escape, Kurt engaged his father in a sword fight. Kurt rejected Azazel as his father due to his evil ways and Azazel was equally appalled that a son of his could be so virtuous. Thanks to Polaris' manipulation of the dimensional rift within Abyss’s body, Kurt and the others were able to escape the brimstone dimension. Just before the X-Men teleported away, the tower upon which Azazel and Nightcrawler were fighting collapsed and Azazel fell into one of the many dimensional rifts within the brimstone dimension, laughing maniacally. His whereabouts are unknown but it appeared that the X-Men left Azazel and the surviving Neyaphem still trapped within the brimstone dimension. [Uncanny X-Men (1st series) #434]

Age of X-Man: the Amazing Nightcrawler #5