• Imbue existing sources of smoke with psycho-
mnemonic power, creating "dream-smoke" that can
grow and move according to her direction, remove
knowledge and memories from the minds of others
and implant new falsified memories in their minds

The history of the woman known as Beautiful Dreamer is uncertain. At some point in her life, she joined the Morlocks, a community of homeless mutants living in the Alley underneath Manhattan, away from the prying eyes of human civilization. Dreamer became part of a smaller clan within the Morlocks known as the Drain Dwellers and seemed particularly close to the confident Erg, possibly even sharing a romantic relationship.

One day, the children of a Morlock named Annalee were brutally murdered by surface-dwellers. Because the kids were on an errand alone for the Drain Dwellers when they died, Callisto decreed that Dreamer and the Dwellers must look after Annalee as she recovered from her grief. Annalee was a projecting empath, however, sending out waves of despair after the loss of her babies, and so Callisto also sent the power drainer Leech to live with the Drain Dwellers and keep Annalee's empathy in check. These living conditions were maddening for the Drain Dwellers. Leech's presence prevented them from accessing their powers for everyday use, but whenever he was absent they were subjected to Annalee's unrelenting despair. 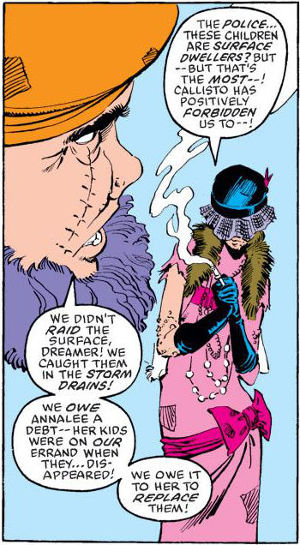 Finally, Erg and the boys lured the children of Power Pack into the sewers with their lost school books. The Power kids were kidnapped and brought to Annalee as new children to replace the ones she lost. The Drain Dwellers wanted Beautiful Dreamer to use her dream smoke and rewrite Power Pack's memories to make them love Annalee as their mother. Dreamer hesitated at the idea of defying Storm and Callisto's rule about raiding the surface to kidnap people, but Erg claimed Power Pack was already IN the Alley when they caught them, so it was a loophole. Before Dreamer could brainwash Power Pack, they were found out by Nightcrawler and Shadowcat of the X-Men, who saw the Drain Dwellers's suspicious activities while on a tour of the Alley. The X-Men helped Power Pack get free and they confronted the Morlocks. Julie Power talked with Leech about how Annalee felt, and the Powers forgave Annalee and the Dwellers for their actions. Nightcrawler threatened to tell Callisto about their behavior, and believed the Drain Dwellers had been cowed into leaving Power Pack alone. [Power Pack (1st series) #12]

Annalee was not willing to give up on making Power Pack hers, however. She had Beautiful Dreamer slip into the Powers' apartment complex, rewriting the memories of Jim and Margaret Power to make them forget they ever had children. For good measure, Dreamer also visited the super and neighbors of the Powers, to make them forget the kids as well. Power Pack woke up in their parents' bed after a thunderstorm with no evidence they had ever lived in the apartment, for the Morlocks had also cleared out their rooms and brought their belongings to the Alley to decorate the new rooms Annalee made for them.

Power Pack recognized Beautiful Dreamer's role in their situation, and tried to confront the Morlocks in the Alley. Alex, Jack and Julie were captured by the Drain Dwellers, however, and subjected to Dreamer's memory smoke. Their minds were reorganized to remember Annalee as their mother, and their faces were altered by Masque to make them unrecognizable. Only Katie Power escaped during the attack, and was ultimately discovered by her friends in the X-Men.

Katie and the X-Men raised a ruckus with the Drain Dwellers that drew Callisto's attention. She ordered, with great finality, that Dreamer restore the Power children to their true memories, and Power Pack would be left alone forever. Demonstrating a remarkable capacity for forgiveness, Katie Power named Annalee the Powers' special grandmother, and they all offered to remain friends with Dreamer and the Drain Dwellers. [Uncanny X-Men (1st series) #195]

Months later, Beautiful Dreamer and Erg were cooking with their friend Zeek when the Marauders came to the Alley. Scalphunter and his cohorts were responsible for the earlier murders of 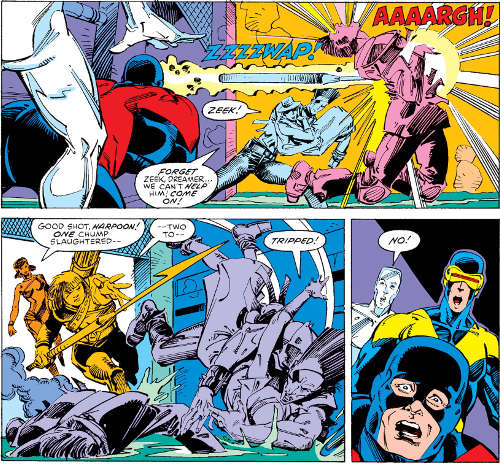 Annalee's children, and now returned to massacre the entire Morlock population. Their bloodthristy ferocity was stunning, and dozens died in the first few minutes. Erg swept up the injured Dreamer in his arms and tried to outrun the onslaught. Zeek was murdered by Harpoon during the Marauders' pursuit, just as Cyclops and the X-Terminators crossed their path. The X-Terminators were searching the Alley for their missing ward Artie Maddicks, but quickly adjusted their mission to protect the Morlocks and get them to safety. After several encounters with the Marauders, they found Erg and Dreamer's friends from the Drain Dwellers, Ape and Tar Baby. With several wounded, they led the Dwellers to the underground entrance of their own X-Factor Complex. Beautiful Dreamer was unconscious during the evacuation, and her injuries were tended to at X-Factor's makeshift shelter. [X-Factor (1st series) #10, Power Pack (1st series) #27] 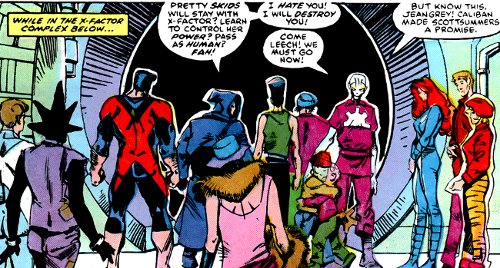 Beautiful Dreamer and the other surviving Morlocks stayed at the X-Factor Complex for some time as they recovered from the massacre. Despite being welcome by the original X-Men, it got very crowded inside the complex. Eventually, Erg decided to lead Dreamer and the other Morlocks back into the Alley to rebuild what remained of their settlement. [X-Factor (1st series) #12, 15]

Miraculously, Beautiful Dreamer and Erg managed to avoid many of the plights that plagued the Morlocks in the following years, including the unstable rule of Masque, the mass attempted suicide and banishment to the Hill dimension by Mikhail Rasputin and the culling of their friends Ape and Tar Baby in the Weapon X Program's Neverland camps. They also survived M-Day, remaining among the few hundred mutants who still possessed their powers after the Decimation. 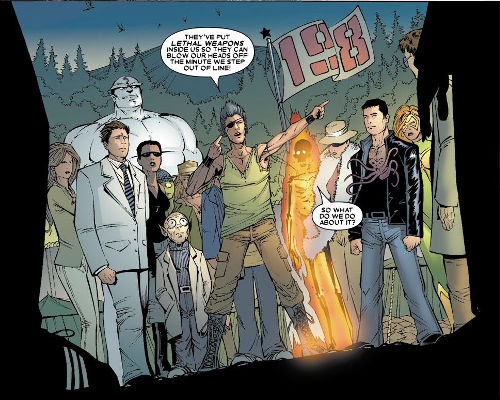 Beautiful Dreamer and Erg made their way to the X-Mansion after M-Day. They became part of the reservation camped on the mansion grounds, loosely referred to as "the 198" after the initial estimation of mutants left on Earth. General Lazer of the government Office of National Emergency attempted to contain the 198 rather than simply keep them safe, however, resulting in three-way conflicts between O*N*E*, the 198 and the X-Men about the value of safety and security versus personal freedom. Erg became a spokesman among the 198, demanding fair and humane treatment, but the quiet Dreamer stayed in the background, avoiding conflict as best she could. [X-Men (2nd series) #183, X-Men: The 198 #4] The 198 eventually secured their release from the reservation, and were no longer forced to remain huddled in one place by the government. Beautiful Dreamer and most of the 198 scattered after that. [Civil War: X-Men #4] 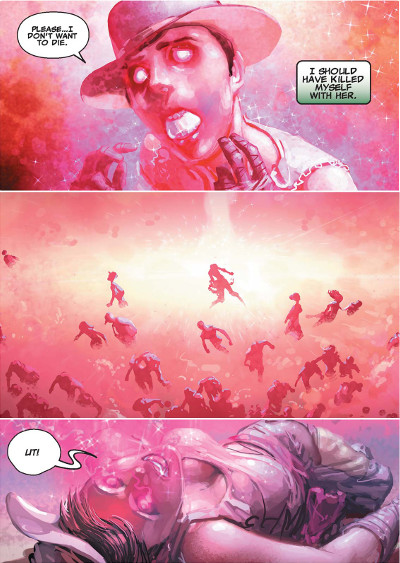 In the end, though, Beautiful Dreamer's luck ran out. While traveling cross-country to the new mutant sanctuary city established by the X-Men in San Francisco, Dreamer was captured by the Sapien League in St. Louis, Missouri. Acting as an extension of the techno-organically powered Bastion, the League's Leper Queen infected Beautiful Dreamer with a weaponized version of the Legacy Virus. Her powers were sent out of control, on the verge of terminal overload. Dreamer was then dropped in the middle of a Friends of Humanity meeting in  Ames, Iowa. Panicking, knowing she was about to die, Beautiful Dreamer helplessly released an unprecedented amount of dream-smoke at the moment of her death. The smoke blasted over the entire town, extracting so much memory from their minds that their brains forgot to tell their hearts to beat. 1,100 anti-mutant activists were killed in an apparent act of mutant terrorism. Bastion killed his own people to further the cause of mutant fear and hatred, using Beautiful Dreamer as a weapon to do it. [X-Force (3rd series) #12]