Bella Donna Boudreaux was born in New Orleans, Louisiana, as heiress to the Assassins Guild. Her father Marius was ruling member of several families that made up the inner council of the Guild, world-class mercenaries able to eliminate any target for a price. The Assassins Guild of New Orleans was the hereditary rival to the Thieves Guild, as both guilds vied for the attentions of their shared benefactress, Candra of the Externals. Candra gifted the guilds with the Power and the Life in order to hold them in her sway. The Thieves were given the Elixir of Life, making them virtually immortal so long as they remained loyal. Meanwhile, Candra used her abilities to unleash any mutagenic potential she found within the Assassins, giving them unique powers. Clan Boudreaux and the other families were the result of generations of selective breeding by the Assassins, presumably to cultivate the potential needed for Candra’s power to work.

As “princess” of the Assassins Guild, Belle was inevitably the target of the guild’s rivals or former targets seeking vengeance. She was only 8-10 years old when assassins attacked her on the streets of New Orleans. Bella Donna was already a trained killer by this age, but she received help from a young street urchin named Remy who had seen the thugs advancing on her. The two of them became fast friends, much to her family’s distaste. ANY thief was beneath the daughter of 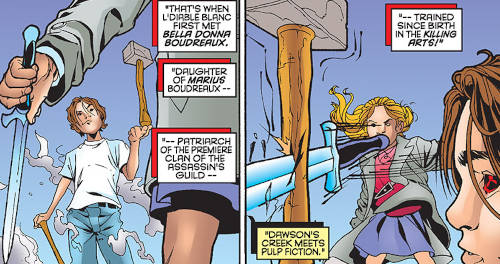 Marius Boudreaux, but Remy was soon after caught picking the pocket of Jean-Luc LeBeau and became the adopted son of the patriarch of the Thieves Guild. Still, Belle and Remy remained friends despite their families’ objections. As they grew older, the two went from best friends to young lovers, taking refuge from their feuding families in each other’s arms. [Gambit (3rd series) #1, Gambit (1st series) #3]

As tensions continued to grow between the Thieves and Assassins, Jean-Luc approached Marius with a plan to prevent all-out war from consuming their city. He suggested binding the families together through a marriage between Remy LeBeau and Bella Donna Boudreaux, sealing a lasting peace between the guilds. Marius ultimately accepted, and so Belle and Remy were ordered to marry each other when they were eighteen. Independent romantics at heart, Belle and Remy chafed at having a decision they would have made on their own taken out of their hands. 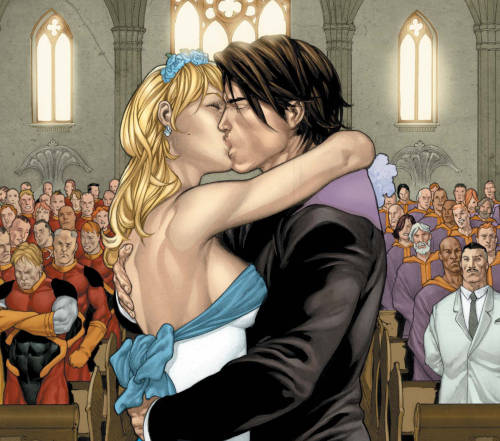 They saw the need for peace between the families, though, and were willing to make the most of being rushed down the aisle. Immediately after the vows, however, Belle’s ill-tempered brother Julien refused to accept his new brother-in-law. He insulted Remy to his face and demanded a duel to the death by local tradition. Remy was forced to accept or be shunned as dishonorable for any future contracts with the Guild.

Remy and Julien fought with sword and dagger, and Remy succeeded in stabbing Julien through the chest. However, he also uncontrollably released a kinetic charge into the dagger with his growing mutant abilities. This created a dispute under guild law over whether the kill had been an honorable one, and the fragile peace between the Assassins and Thieves was almost over before it had begun. The Assassins demanded compensation and may have asked for Remy’s death, but Bella Donna intervened on her father’s decision. Belle argued that exile from the Guilds and New Orleans would be a suitable enough punishment, and Marius relented. Belle had expected Remy 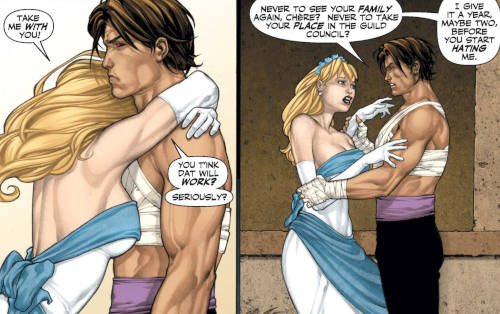 to take her with him into exile but, to her shock, her new husband refused. Remy hated being excommunicated from his guild and his family, and he believed Belle would feel the same way. Willingly exiled or not, Remy thought Belle would resent him for their status on the run together, and so he abandoned his wife on their wedding day, leaving a crushed Bella Donna behind. [X-Men (2nd series) #8, X-Men Origins: Gambit #1]

Years passed, and the peace between the Assassins Guild and the Thieves Guild remained a tenuous thing. Belladonna rose in the Assassins’ ranks based on her ability as much as her pedigree. She received the honor of having her latent mutagenic potential unlocked by the benefactress, developing superhuman powers to aid her and her Guild. However, Julien returned, mysteriously changed as a result of his “death” and began killing Thieves to provoke another war between the guilds. With the peace already failing between the Assassins and the Thieves, there was no reason to continue enforcing Remy’s exile. Belladonna sought out her prodigal husband to fulfill his delegated responsibility of keeping the peace between the guilds. In Westchester County, New York, Belle located Remy under the alias of Gambit, working with the mutant heroes known as the X-Men. Once the X-Men got over the shock of learning Gambit was married, they agreed to help Belladonna and Remy restore the non-aggression pact between the guilds. [X-Men (2nd series) #8]

Down in New Orleans, they learned Julien had made a deal with the alien Brood and their queen. Many Assassins had already been infected with the Broods’ parasitic eggs as hosts, and the Spirit of Vengeance known as Ghost Rider had suffered a similar fate. The city’s catacombs where they fought collapsed around the heroes, separating Belladonna and Gambit from their allies. Belle took the moment to express her fury at Remy for leaving her on their wedding day. Gambit apologized but he was a rebel at heart, bitter over having his choices taken from him by the arranged marriage, especially since he would have married Belle willingly, given the chance. Forced to marry, forced to kill and forced to leave, he felt leaving Belle behind was not only in her best interests, but selfishly it was also the only choice that was his to make on that day.

The X-Men uncovered a number of Thieves Guild members held in stasis until the Brood Queen could infect them properly and learned the children of both guilds had also been taken. In need of aid, Psylocke stabbed the infested Ghost Rider with her psychic knife in an effort to break the embryonic Brood’s hold over him. The conflict between the Brood, the Spirit of Vengeance and his human host was a maelstrom of thought that nearly overwhelmed her. Belladonna had her own psionic powers and followed Psylocke into the astral plane to provide her aid. She steadied Psylocke, then delivered the distraction necessary for Psylocke to reach the mind of the human Dan Ketch and sever the Brood’s connection to him. Belladonna struck back as well, destroying 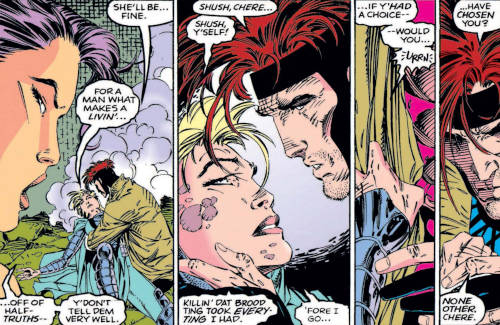 the Brood’s mental essence, and Ghost Rider was freed. However, Belle was critically wounded during the astral conflict. She and Remy exchange some final, sweet words before she seemingly passed away. Gambit demanded the Thieves remove Belladonna from the scene, and Ghost Rider and the X-Men then pressed on to defeat the Brood and free the children. [X-Men (2nd series) #9, Ghost Rider (3rd series) #26-27]

Despite how it seemed in the caves, Belladonna was still clinging to life when the guild got her back to her family. Marius kept his daughter alive with the best care he could provide, but she remained in a coma, unable to wake and on the brink of death. Julien continued to cause trouble amongst the guilds, gathering upstarts and renegades willing to go against the established order. He attacked his father, made traitorous allies among the thieves, and even attacked the benefactress’ Tithe Collector. Julien’s ruckus brought Gambit back to New Orleans, and Remy learned of Belle’s condition. Marius insisted the Elixir of Life from the Thieves Guild could save his daughter, and he pressed Gambit to steal from his family if necessary to restore Belle’s health.

While Gambit danced with Candra and the Guilds, he left his teammate Rogue with Tante Mattie 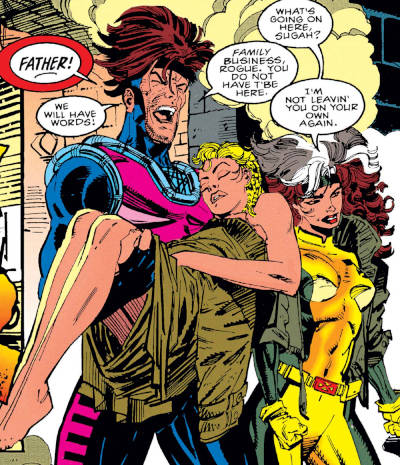 to look after Belladonna at the secret property he owned in the Garden District. Mattie was traiteur to both guilds -- mystical healer, spiritual guide, and a unifying presence among them who often encouraged Belle and Remy’s relationship as children. Rogue and Gambit had developed a deep connection to one another during their time together as X-Men. However, Rogue’s mutant ability made it impossible for her to touch someone without absorbing their powers, their memories and eventually their lifeforce. Rogue wanted the sort of connection Belle and Remy once had and was tempted to touch Belle and experience that love for herself, even if only second hand. Rogue resisted the temptation, but Belladonna moved involuntarily in her state and made contact with Rogue’s exposed hand anyway. As a result of touching Rogue, Belle began to seize and her condition worsened so that even Tante Mattie’s skills could no longer help stabilize her.

Gambit ran the gauntlet of Thieves and Assassins set before him by Julien and Candra, but ultimately gathered the elements necessary to make the Elixir of Life. Julien had been restored to life by the Elixir, however, and had become addicted to it. He attacked Gambit at Belle’s bedside, willing to deny the Elixir to his sister if it meant claiming it himself. Julien shattered the vial in his desperation, and it was Marius who finally murdered his wayward son. After peace was re-imposed on the guilds and Candra shown the door after her hand in Julien’s actions was discovered, Gambit returned to Belle. He was able to wring out some small droplets of Elixir from 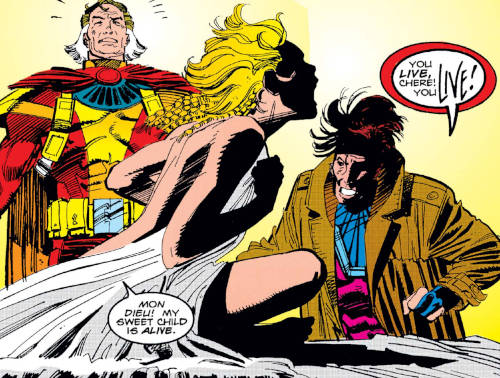 the bed sheets where Julien destroyed the vial, enough to drip into Belle’s mouth and bring her back from the edge of death. As a consequence of her trials (and Rogue’s touch), Belladonna’s memory was fractured, and she no longer remembered who Remy was. Gambit took this as a blessing in disguise, separating himself from Belle and the pain he had caused her and turning her over to Marius to care for and see to her recovery. [Gambit (1st series) #1-4]