• Possesses an extended lifespan but normal progression of vitality

Amanda Mueller was born into wealth sometime in the mid to late 19th century and was one of the first mutants to be encountered by the geneticist Nathaniel Essex. Mueller was immortal but her body was not immune to the effects of aging. She has claimed that her mutant immortality inspired Sinister to seek out his own. Sinister and Amanda would come to form a fruitful partnership that would last well into the 20th century. Her daughter, Gloria, would later refer to her as Mr. Sinister's “Birth Factory.” [Gambit (3rd series) #13, X-Men Legacy #213-214]

Amanda married a man named Daniel sometime prior to 1891 in New York. The marriage was unusual in that Daniel was a commoner and therefore, well below Amanda's privileged social station. During her marriage to Daniel, Amanda had a number of pregnancies but only one male child survived. It's not clear if her miscarriages were due to her unusual physiology or were the work of Mr. Sinister who posed as her obstetrician. By 1891, her numerous miscarriages had 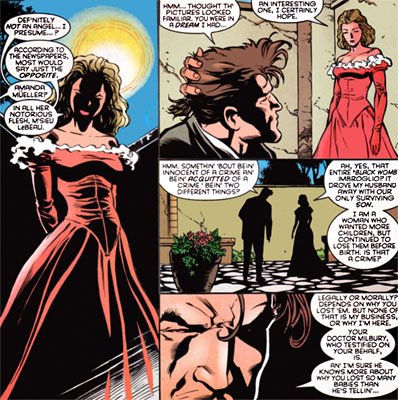 attracted  quite a degree of notoriety and she was arrested and put on trial for infanticide. The story was front page news and the media dubbed Amanda the “Black Womb Killer.” In his guise of Doctor Nathan Milbury, Sinister testified on Amanda's behalf and she was acquitted of all charges. During her time on trial, Daniel divorced Amanda and fled with their sole surviving son to parts unknown. Shortly after her release, Amanda moved to a mansion on 5th Avenue. Not long after this, she was sought out by the time-lost X-Man, Gambit, who was attempting to track down Mr. Sinister. Gambit offered Amanda a bribe to reveal Sinister's location, which she took. [Gambit (3rd series) #13]

NOTE: The surname of Amanda's husband was never mentioned on panel but given her husband's age, social status, geographic location, physical appearance, and Sinister's interest in their offspring, all evidence points to him being Daniel Edge aka Daniel Summers, an ancestor of the mutant Summers clan. This would make Amanda the earliest known mutant in the Summers family line. For more information about this probable connection, visit our Summers Family Tree.

Despite betraying Sinister's location to Gambit, Mueller's collaboration with Sinister continued well into the next century. During World War II, Amanda Mueller set up a government-backed black ops genetics program called the Black Womb Project, which was also known as the Eugenics Information Center. [X-Men Forever (1st series) #4] She functioned as the group's mutagenics specialist and head researcher. Future X-Men ally Fred Duncan served as the project's FBI liaison. The goal of the organization was the investigation and propagation of human mutation through the use of recently acquired advanced extraterrestrial technology. [Gambit (3rd series) #21-22]

The Black Womb Project had a number of other notable researchers at its Alamogordo facility in New Mexico. The staff initially included Dr. Nathan Milbury, Irene Adler (Destiny of the Brotherhood), and Dr. Kurt Marko (father of Cain Marko and later the stepfather of Charles Xavier). In later years, Dr. Brian Xavier (Charles Xavier's father) and Alexander Ryking (father of Carter Ryking) joined the project. Aside from Milbury, none of the other researchers appeared to meet Mueller face to face. Interestingly, Mueller's researchers also were unaware of where the funding for the program came from. Either the group lost their government funding at some point or the researchers were kept in the dark about the government's involvement in their operation. 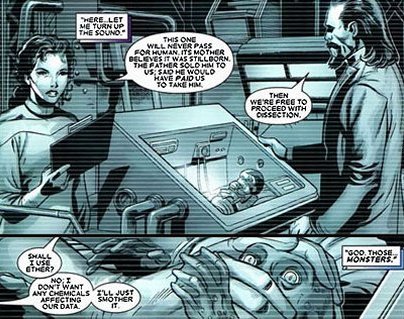 During her work with Black Womb, Mueller displayed a total lack of empathy. Children were referred to the project from around the world and Mueller had no moral compunction with experimenting on or killing these infants as part of her research. Irene Adler stated that Mueller had the expertise to help the children afflicted with the most extreme mutations but preferred to see how the “oddities developed.” [X-Men Forever (1st series) #4, New X-Men (2nd series) #41]

Roughly fifty years ago, Mueller gave birth to a daughter, Gloria Dayne. Gloria was a mutant like her mother and possessed the ability to view other people's dreams. When Gloria was in her twenties, Mueller disappeared. Initially, Gloria believed her mother had died until she started to see her in other people's dreams long after her disappearance. In actuality, Mueller (now over one hundred years old), had continued her association with Mr. Sinister and returned to the Black Womb Project.  During these years, Mueller's appearance seemed to fluctuate from looking like a

beautiful, healthy woman in her prime to having a corpse-like vigor. Cain Marko later remarked that she kept herself immortal by dissecting other mutants. This is incongruent with the true nature of Mueller's mutation. However, it is possible that Mueller found some way of using the mutants she was studying at Alamogordo to retard or reverse the effects of aging on her body for short periods of time. [Gambit (3rd series) #20-21, New X-Men (2nd series) #41, X-Men Forever (1st series) #4]

Years later, while Mr. Sinister was away from Alamogordo, Amanda found out about another of his projects - the Cronus Machine. The Cronus Machine was engineered by Sinister to resurrect him should he die by writing his own DNA code into the body of a mutant. Sinister had used Amanda's Black Womb project to find and modify several mutant children to serve as his new vessel upon his death. With this knowledge, Amanda modified her own DNA so that she could use the Cronus Machine to claim Sinister's powers should he die, in the hopes of fixing her now very aged body. However, Amanda altered the procedure so she would only gain Sinister's abilities and inherit none of his personality. Though she remained with the Black Womb Project until its closure, it was around this time that Amanda and Sinister's amicable working relationship broke down. After all their years together, Mueller came to harbor a deep animosity towards Sinister, possibly due to his failure to cure her aged body.

Several years later, Mr. Sinister was killed by Mystique. Amanda finally saw her chance to use the Cronus Machine. Unfortunately for Amanda, one of Sinister's pre-selected vessels, Charles Xavier, still lived and was a viable candidate for the Cronus Machine's resurrection program. 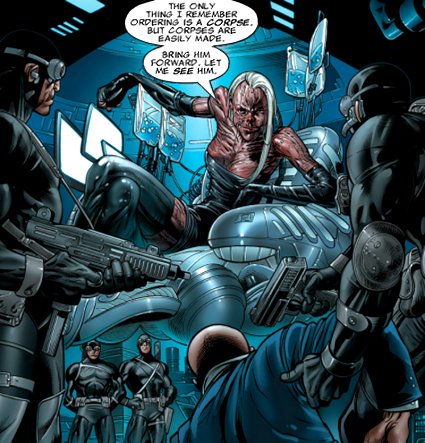 While Charles lived, the Cronus Machine would not enter its next cycle and it would be useless to her. Amanda dispatched her agents to kill Xavier and prevent Sinister's resurrection. Sinister's DNA had already begun to influence Xavier, however, and he used his telepathic abilities to trick the agents into bringing him to the Cronus Device. Sinister, in possession of Xavier, attempted to kill Mueller for betraying him but she was saved by the timely intervention of Gambit and Sebastian Shaw, who managed to destroy the Cronus Device. This gave Xavier the upper hand in a psychic battle he had been locked in with Sinister, and Xavier was finally able to exorcise Sinister from his body and his mind. Amanda used the ensuing chaos to make her escape. He current whereabouts are unknown. [X-Men Legacy #213-214] 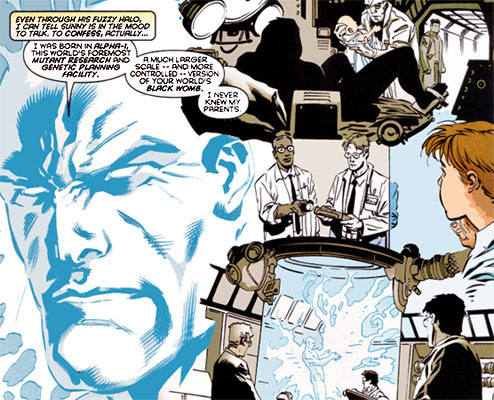