• Superhuman strength,
endurance, reflexes and
resistance to physical
injury, chameleon effect
enables him to blend into
his surroundings

Not much is known about Mickey Tork prior to his joining X-Force. He first came to the public’s attention as a crime fighter in San Francisco, going by the name Rainbow. Although his powers were mainly his size and strength, Tork’s skin seemed to shift in a multitude of colors, like his namesake. However, he changed his name to Bloke once he started using his powers more to blend into his surroundings like a chameleon. Prior to qualifying for X-Force, he was worked as an operative for some paramilitary organization, which deployed against a group of Balkan terrorists. On this mission and others, he used his ability to “Pink Up” and wreak havoc on the soldiers. Bloke was said to have a 2-year kill rating of 6 per mission, only bettered by Anarchist, who had recently been promoted to X-Force. 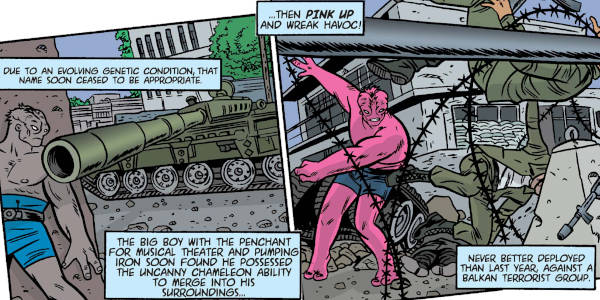 Although his employer was not named, Bloke most likely worked directly or indirectly for the young software trillionaire Spike Freeman. Around the time the entire X-Force team was massacred on a 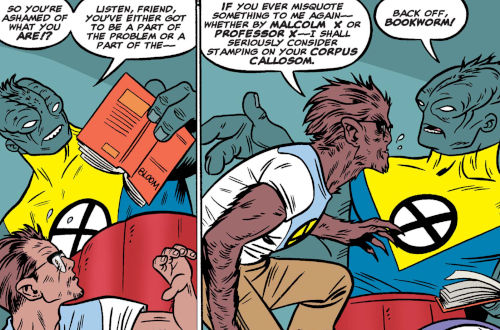 mission, Freeman became the team’s new owner and Bloke was one of five mutants placed into X-Force. Immediately, the new members’ personalities began to clash. Openly gay himself, Bloke seemed to take offense when the erudite Vivisector claimed he didn’t want to be a team player or a mutant, perhaps feeling that Vivisector should feel as comfortable being a mutant as he, Bloke, felt being gay.

The two almost came to blows over the issue, but the impending fight was broken up by the arrival of team handler, Coach, who took Bloke and his teammates into the mission briefing room to explain their first mission. The team was tasked to rescue a young and highly destructive mutant named Paco Perez from his home country, the Republic of Bastrona. [X-Force (1st series) #117]

Before departing on their mission, Bloke was allowed to return to his home of San Francisco to 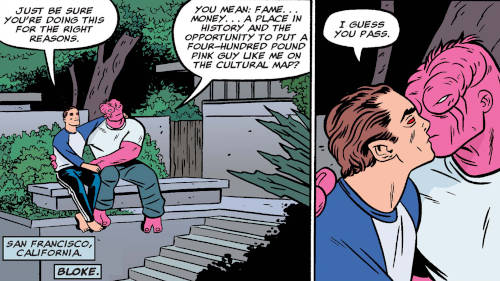 Arriving in Bastonia, X-Force’s first task was to locate local information broker named Diego, who would in turn direct them to Paco Perez. While their leader, the Ophan, departed to search for Diego on his own, Bloke remained on a rooftop with the rest of the team. By happenstance, they had arrived during a Carnival type parade, and when his teammate Phat commented that the “chickens” could really shake it, Bloke was sure to complement the “roosters.” Phat’s reaction to this was apparently one of homophobic disgust, but Bloke only replied with a smile.

Although they had been ordered to stay behind, U-Go Girl chose to defy their leader and decided to check up on the Orphan. Her disobedience paid off as it turned out the whole event was a trap and Bloke and the rest of X-Force were just in time to save their leader, who had been cornered by a group of Bastonian soldiers. After killing a soldier with his bare hands, Bloke felt a rush of 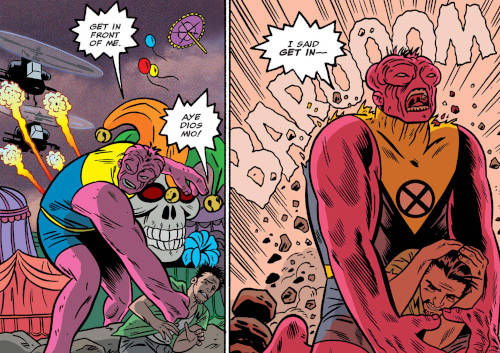 adrenaline and he called out that he would capture the fleeing Diego. However, as Bloke closed in on Diego, two assault helicopters appear above him. Anarchist attempted to blast them out of the sky but was stopped by Orphan for fear of them landing on civilians. This act of kindness proved fatal to Bloke, who heroically shielded the helpless Diego with his body, as machine gun fire ripped into Bloke’s back.

Their objective located, U-Go Girl then teleported the team (plus Diego) away to safety, though for Bloke the damage was done. Though clearly in pain, Bloke commented that he thought it should hurt more. A concerned Phat told Bloke that their teammate Saint Anna would be able to fix him up with her healing powers, but Bloke informed him that he was beyond fixing. Besides, one less of “his kind” to worry about right? Much as with Bloke’s earlier comment, Phat seemed taken aback. Bloke would not live to see Phat accept his own homosexuality or see him begin a relationship with Vivisector. 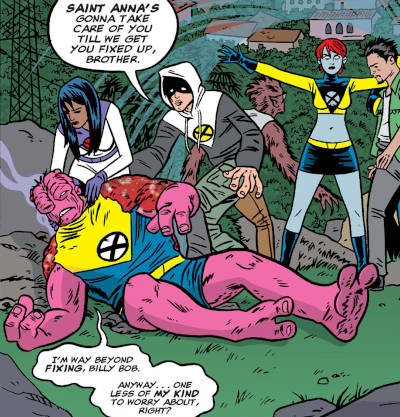 The death of Bloke affected each of his teammates differently. Phat and Saint Anna seemed genuinely upset about it and wanted to kill Diego. U-Go Girl callously joked about it, and the indifferent Anarchist had to be ordered by an upset Orphan to vaporize Bloke’s body. After this deed was done, the mission quickly resumed and Bloke was not discussed any further. The brief and tragic tenure of Bloke in X-Force seemed to be just acceptable collateral damage in the rise to fame and fortune of his teammates. However, he proved to be a true hero willing to sacrifice himself even for a sleaze ball such as Diego. [X-Force (1st series) #118]