• Telepath able to sense other minds,
read and project thoughts over a distance,
rapidly accumulate knowledge from the
minds of those around her, control the
thoughts and actions of people and animals,
edit memories, and psychically assault
and shut down other people

Astrid's exact back story is somewhat of a mystery, as she was an unreliable narrator. She appears to be British, based on her vernacular, likely from London as she mentioned that she lived there. Astrid claimed her father died of coronary failure when she was seven years old. Her mother quickly remarried a man named Aubrey Chilton. Astrid said that she had initially tried to be supportive of her mother's new relationship but this soured after the birth of her younger sister, Yvonne. Her mother and stepfather took Astrid's bedroom and converted it into a nursery, forcing Astrid to sleep on the couch in the living room. Astrid said that her mother became hostile towards her as time moved on and later she overheard her mother tell the baby Yvonne how she was her favorite, which devastated Astrid. At the age of 13, Astrid's telepathic powers developed. She would claim to Emma Frost later on that her family rejected her, forcing her to run away. This was a lie. Approximately one year later, Astrid telepathically compelled her sister, Yvonne (then five) to murder her parents while they slept. Poor Yvonne was institutionalized and apparently went mad. [Emma Frost #15-18] 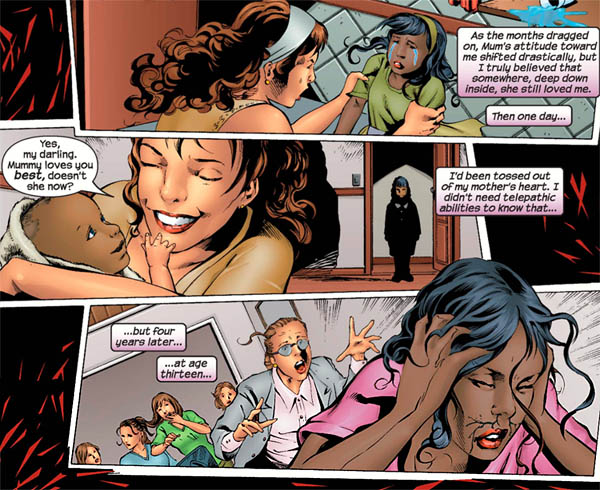 What exactly happened to Astrid after the death of her mother is unclear. She said that she hung around libraries to telepathically absorb information from the people around her and that put her through secondary education. [Emma Frost #16] Astrid also did some degree of studying of her own regarding her “condition” by reading scientific journals, some of which were by Charles Xavier (although there is no indication she had met him). She understood she was a telepath, a mutant and she was aware of the theory that mutants were the next stage in evolution but she said she rejected the idea. She decided to study psychology and was enrolled in a master programs in Empire State University when she discovered Emma Frost. Astrid said that Emma was unknowingly projecting her thoughts throughout the campus but this, like many of things Astrid said, may be untrue. Regardless, she did introduce herself telepathically to Emma Frost one day when they were both standing in a corridor. [Emma Frost #14-15] 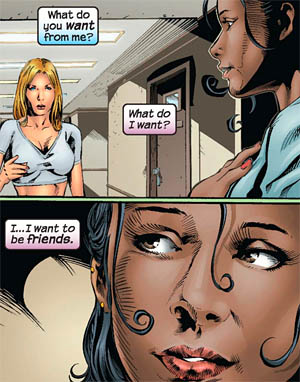 Astrid told Emma that she wanted to be her friend, that she had felt lonely and was so happy to find someone with abilities like her. Emma was intrigued by Astrid and the two began spending lots of time together. Astrid's telepathic skill level was far in advance of Emma's at this time. She told Emma her backstory but said her parents rejection forced her to leave home and fend for herself, which forced her to advance her abilities quickly.

As known from later revelations, this was a lie Astrid either had a teacher or she was somewhat of a savant. It is possible than, given her lack of empathy, Astrid's telepathic skills may have progressed faster than Emma's, as she had no conscience holding her back, unlike Emma whose ruthless streak developed later. Regardless Emma was impressed by Astrid and asked if she could teach her how to correctly use her powers. Astrid agreed and taught Emma some rudimentary skills in reading and controlling minds. However, Emma and Astrid's relationship was rife with issues from the beginning. Astrid had no boundaries and was unabashedly reading Emma's mind and everyone around her, much to the discomfort of Emma. She equally kept her own mind tightly closed from Emma and had impressive psi-shields.

Astrid hated humans, considering them “soulless, meat puppets” compared to superior beings like her and Emma and that they were there to manipulate as they pleased. Astrid had a plan to isolate Emma by destroying her other relationships. She was disrupting Emma's telepathic powers for an unspecified period of time. One such incident involved Emma collapsing at a basketball game, which resulting in Emma not leaving her dorm for a week. She also encouraged Emma to date a young suitor named Max. Max and Emma had a very pleasant date, only for him inexplicably turn violent. Emma attempted to use her powers to protect herself but found they didn't work and she was punched in the face. Some overlooking students intervened, saving Emma. Max was expelled as a result.

A short time later, Emma found herself dating an old flame, Ian Kendall. He had been seeing her roommate, Chrissie, to Emma's annoyance and incessant complaining to Astrid. Tensions erupted between Emma and Chrissie when Emma stole him from her. Chrissie moved out, giving Astrid an opportunity to room with Emma. Astrid said this made them like “sisters.” 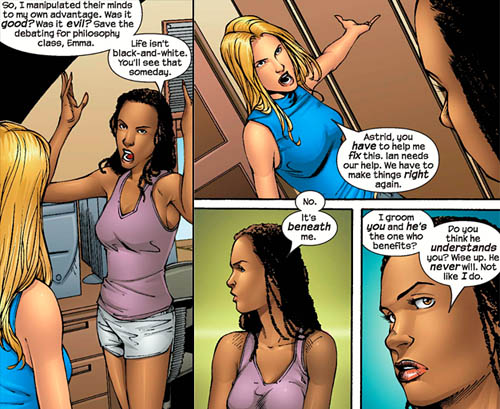 The relationship with Ian was greatly massaging Emma's ego and Astrid became jealous of the confidence it was giving Emma. She used her mind-control abilities to have Ian attack his ex, Chrissie, so Astrid could get him out of the picture. [Emma Frost #15-17]

Astrid overplayed her hand by having Ian attack Chrissie as Emma was able to discover signs of telepathic manipulation in Ian's mind and she realized what Astrid had been doing. When Astrid was confronted, she confessed to everything that had happened with Ian and Max but defended herself, saying that she did it for Emma and that Ian would have eventually hurt her in the end, as he didn't understand her. Astrid also claimed that she and Emma were more than friends, possibly indicating that her interest in Emma was more than just platonic. At the same time, Chrissie was about to speak to the college authorities about the attack from Ian, Emma tried to force Astrid to help Ian but Astrid claimed it was beneath her and attempted to trap Emma inside her own mind. This proved folly for Astrid, as Emma used this opportunity to rife through Astrid's memories and absorb her skills. A naturally more powerful telepath Emma pushed back on Astrid, rendering her catatonic. 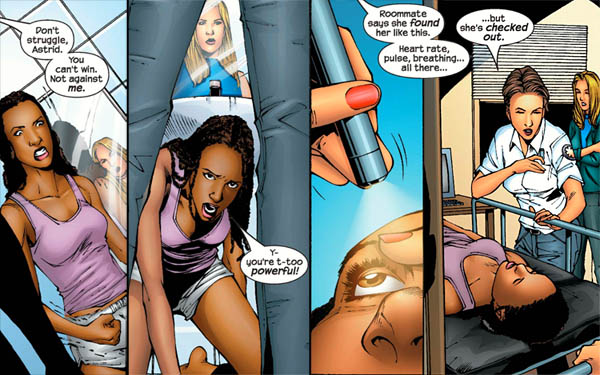 Emma used her new skills to make Chrissie appear mad when interviewed about the assault, forcing the girl to suffer a mental breakdown. Emma chose to confess to Ian everything that had gone on. He was so repulsed that he left her. In the aftermath, Astrid's “grooming” of Emma, as she had put it, was successful. As Astrid was carted away by an ambulance, Emma felt that Astrid had been right about humans after all, thus starting her on the road to becoming the Hellfire Club's, White Queen. [Emma Frost #18]

Age of X-Man: the Amazing Nightcrawler #5