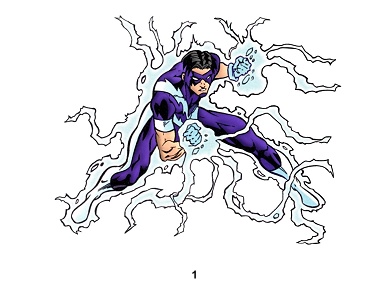 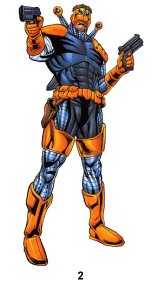 --) In his earliest attempts at heroism, Chris wore no costume. Instead, he generated an electrified aura around his body to distort his appearance, making it difficult to accurately make out his features. [Maverick #10]

1) Beginning his super-hero career as Bolt, Chris adopted a blueish-purple suit, adorned with two stylized white lightning bolts extending from his right shoulder down to his left hip. He had short sleeves on his costume, with white gloves, boots and trunks. His mask covered his eyes, and wrapped around his neck underneath his chin. [New Warriors (2nd series) #1]

2) In his role as Maverick, Chris wore a costume virtually identical to his mentor's. The majority of the suit was reinforced metal armor, protecting his neck and everything below it. He wore gold gloves, boots, epaulets and a utility belt with various items stored in its pouches. He also carried a sword on his back and wore a variation to Maverick's trademark golden mask, which covered everything but his mouth and chin, and was wired in the back to feed power into his optic scanners. [Weapon X (2nd series) #6]