• Channel the "wind between realities" to
create ectoplasmic energy streamers resembling
dragons, as thin ribbons from her fingertips or
large enough to fill hallways, animated to move
and bend at her will, physically lift and
manipulate matter, and "sting" victims with psychic
poisons and a bio-electrical charge
• Occasionally demonstrated other abilities such as space-time
awareness, telekinesis, and stasis fields able to contain
matter or sidestep the gravitational pull of a black hole

Nothing is known about Chimera before she met up with Apocalypse’s self-proclaimed heir, Genesis, not even her world of origin. Although she looks normal, Wolverine once commented that, to his senses, she wasn't quite "human". Chimera also described contemporary Earth like a visitor, not a natural resident. Like her occasional foes in Landau, Luckman and Lake, Chimera used advanced technology to straddle dimensions, hopping between planes of reality like some people cross city blocks. Unlike LL&L, however, Chimera established herself as an inter-dimensional pirate and mercenary. Despite her multiversal knowledge and cunning, her mental state was somewhat questionable. Because the ecto-plasmic dragons she created emerged almost as extensions of her hands, Chimera would often talk to them as if they could understand and talk back. This didn’t really bother Genesis though, for he hired Chimera to study Wolverine and gain as much information on him as possible.

At the time, Wolverine was slowly regressing into a more feral state and she used her technology to predict the final outcome of his transformation. She also aided Genesis in Wolverine’s capture by setting Cyber free from prison and destroying the Madripoor offices of Landau, Luckman and Lake. Naturally, Wolverine investigated and, when he eventually found her inter-dimensional hideaway, he was in for a surprise. The unbalanced woman unleashed her ecto-plasmic dragons at him and knocked him down. She under-estimated him though and, whilst she was gloating over him, he stabbed her through the hand. Chimera made a quick getaway, vowing the next time they would meet she wouldn’t be trying to take him alive. [Wolverine (2nd series) #97]

Chimera stayed in the background whilst Genesis enacted his final plan. Wolverine was captured but he broke free and decimated the villain’s Dark Rider henchmen. [Wolverine (2nd series) #99-100]

With Genesis defeated, Chimera sought revenge on Wolverine, so she teamed up with the sole-surviving Dark Rider, Dirt Nap. She intercepted some confidential messages from Landau, Luckman and Lake and discovered Wolverine was due to have an appointment with them. She decided to send Dirt Nap and a symbiote known as Scream there to soften him up before luring him to her dimension where she would finish him off. Unfortunately, things did not go according to plan and Dirt Nap inadvertently possessed Venom and brought a couple of children along for the ride too. They all ended up in Chimera’s dimension but, when Venom broke free of Dirt Nap, the odds started to slip away from her. Using some creatures from the end of the universe called Plasma Wraiths, Chimera created a distraction and fled through a portal to another part of her dimension. Then, out of spite, she destroyed the only way for Wolverine to get home. 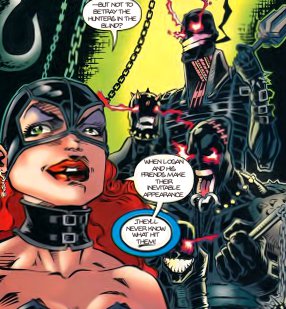 Knowing Wolverine would follow her, Chimera strung Dirt Nap up from the ceiling and used him as bait as she lay in wait with more Plasma Wraiths. Even though Wolverine knew it was a trap, she still got the upper hand on him and tied him up in chains. Before she could kill him, though, she was interrupted by Scream, and Wolverine broke free. Realizing that she would likely be defeated, Chimera set off a lepton imploder, a device that would create a huge implosion and allow her to escape. Things went wrong though when Wolverine and his allies managed to escape instead and Chimera was sucked into the ensuing implosion, seemingly being killed in the process. [Venom: Tooth and Claw #1-3]

Chimera’s fate looked grim but a savior came along in the form of another inter-dimensional mutant, Emplate. DOA, one of Emplate’s minions, noticed that a strange doorway had suddenly appeared in their hideout and, when he opened it, Chimera and Dirt Nap fell out. Grateful for the save, she offered her services to Emplate and he eagerly accepted, given she had the technology to move from world to world. Emplate needed to feast on other mutants to survive and Chimera’s technology meant he could now have access to any mutant he wanted. Chimera gathered some Plasma Wraiths and created a portal to the Massachusetts Academy, the home of Generation X.

Chimera made short work of the few mutants that she found there, whilst Emplate made his way to his twin sisters. Things took a strange turn when the twins and Emplate merged together to create a new form. As more members of Generation X showed up, Chimera continued to knock them back until Emma Frost gave her a telepathic blast. Realizing that things were going bad for them, the new M-Plate took Synch and fled to another dimension with Chimera. M-Plate seemed to have her own agenda and now Chimera was just along for the ride. M-Plate took her to a strange building where she revealed she wanted to merge every being in existence into a single form. Upon hearing this, Chimera became alarmed but, when she objected to the plan, M-Plate vaporized her. [Generation X #33-38]

Somehow, Chimera managed to survive and she stayed off the radar for a number of years. She eventually resurfaced on Madripoor as a mercenary for hire when a drug cartel hired her to eliminate their rivals. Under the cover of darkness, she sent her ecto-plasmic dragons out and they slaughtered twenty-two drug runners. 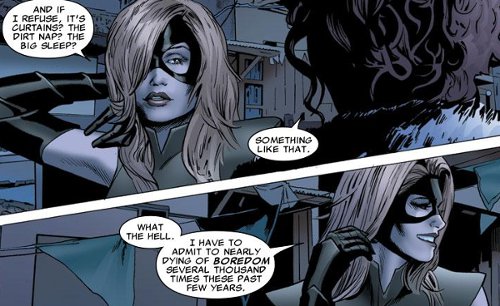 Her brutality earned her the attention of the Red Queen, aka Madelyne Pryor. The disembodied entity was assembling a team of women and she offered Chimera a place on it. Chimera had no choice but to accept and, in return, she was told she could have anyone she wanted brought back to life. [Uncanny X-Men (1st series) #503]

The Red Queen continued to gather her team and, when the Sisterhood of Mutants was full, then sent them on their first mission to steal the body of Kwannon, who had died many years before. As they were digging up the body, the Sisterhood were interrupted by Domino, who had just happened to be visiting the graveyard. A fight broke out and Chimera was stabbed through the chest with a sword. The team escaped with the body and the Red Queen used magic to heal Chimera’s wound. She used her magic once more to heal the decomposing body of Kwannon and place the mind of Psylocke inside it. The Red Queen explained her ultimate plan was to use the same method to bring herself back into the land of the living. For that, she needed Jean Grey’s DNA and she knew Wolverine carried some of it around with him. 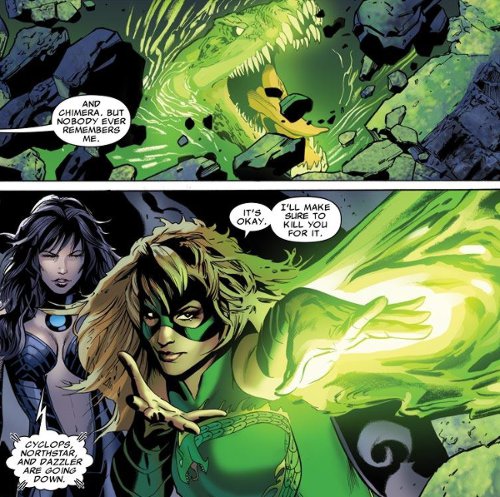 The Sisterhood snuck into the X-Men’s base and ambushed them, with Chimera taking out a number of the team. She bit off more than she could chew though when she squared up against the Stepford Cuckoos and was beaten black and blue. She escaped thanks to Spiral and reconvened with the Red Queen, who was in the final stages of her plan. Chimera took on Colossus and Domino with her dragons but, when the Red Queen was defeated, she had to make a quick retreat with the remaining members of the Sisterhood. [Uncanny X-Men (1st series) #508-511]

With their leader gone, the Sisterhood went their separate ways again. Chimera somehow ended up being captured by a woman called Susan Hatchi and was subsequently injected with nanotechnology. Hatchi had captured a number of other mutants, including the Marauders, and used the nanotechnology to control their minds and bodies. 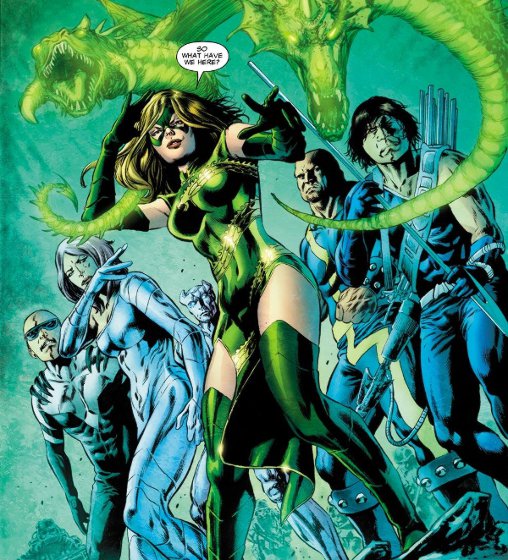 Chimera and the Marauders were sent after a group of X-Men as a test run of the technology. She proved to be a formidable adversary until Karma entered her mind and broke her mental conditioning. After calling a truce with the X-Men, Chimera reluctantly let Karma into her mind, so she could find out as much information as possible. Unfortunately, Hatchi had erased any knowledge of her from Chimera and she had no clue why she had been attacking the X-Men. As the X-Men cleared away the destruction of the fight, Chimera slipped away once more. [Astonishing X-Men (3rd series) #48-49]

Chimera soon joined the Marauders of her own free will when Mister Sinister drafted her into his new and improved group. In the intervening months Terrigen Mists had been released into the atmosphere and the chemical proved to be deadly to mutants. Sinister sought to remedy the situation by combining mutant and Inhuman DNA to create a species that could survive on Earth. Naturally his experiments were unorthodox and he had Chimera and the Marauders capturing unsuspecting victims to be his guinea-pigs. The X-Men soon became involved and Chimera got her chance to battle them once more when they stormed Sinister's base. Despite being defeated, both Chimera and Sinister gave the X-Men the slip, leaving the uncanny mutants with the knowledge that their paths would cross sooner rather than later. [Extraordinary X-Men #1-5]