Cobalt Man was left adrift in space for months after his energies dispersed. He was discovered by the criminal mastermind Egghead, who had seized control of a NASA space lab. Reduced to a state of suspended animation by his eruption, Cobalt Man was at Egghead’s mercy. While pursuing the legendary Star of Capistan ruby with his Emissaries of Evil, Egghead brainwashed the Cobalt Man to attack the Defenders on his behalf. He also rigged Cobalt Man’s suit so that he could remotely trigger another meltdown as a failsafe once his puppet engaged the Defenders. Nighthawk had the Hulk dump Cobalt Man in the river, which temporarily halted the build-up to critical mass. Back at the Sanctum Sanctorum, the neurosurgeon Red Guardian (another Defender) worked to restore Cobalt Man’s mind with Clea, creating a direct link to his brain. The 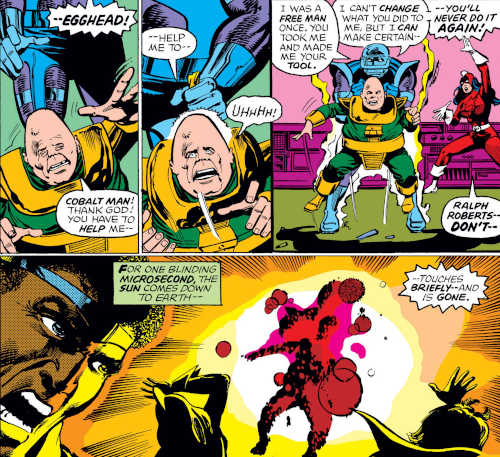 procedure worked and Cobalt Man regained his senses, just as Egghead himself tried to storm the Sanctum to find the Star of Capistan. Recognizing his assailant, Ralph Roberts grabbed hold of Egghead and released his pent-up power. A contained nuclear implosion went off, apparently consuming Egghead and Cobalt Man in a massive burst of atomic power that collapsed in on itself, leaving the rest of the room unharmed. [Defenders (1st series) #42-43]

The rumors of Cobalt Man’s death were greatly exaggerated. Maybe. Despite being caught in a nuclear implosion, the far less resilient Egghead resurfaced months later, having transported himself to safety via teleporter. [Avengers (1st series) #228] Ralph Roberts reportedly wasn’t as lucky, as a gauntlet was eventually recovered with a few finger bones left intact that allowed his brother Ted to confirm his death with DNA evidence. [Avengers / Thunderbolts #3] Unconfirmed reports had the Cobalt Man battling the Hulk again, but were vague as to the time period of this encounter. Furthermore, this Cobalt Man was a seemingly normal man in armor, not a radioactive mutate. [Hulk: Nightmerica #1]

The Thunderbolts were a team of former super-villains who turned towards heroism. Their former leader Hawkeye supported them, but other Avengers such as Captain America weren’t sure. Cap and Iron Man arranged for Stark to be recruited into the Thunderbolts as a spy, while posing as a resurrected Cobalt Man. Stark seemingly crafted a fictional back story that Ralph Roberts was now a sentient cloud of radioactive energy who reformed years after dispersing himself in the encounter with Egghead. Now, “Cobalt Man” needed his armor to maintain physical form, and his 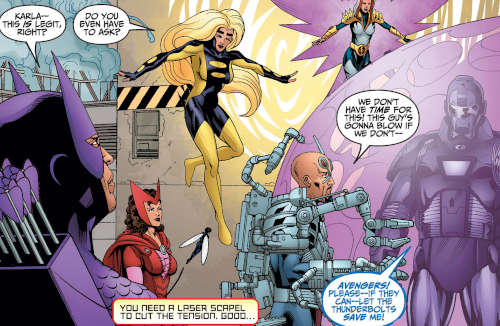 armor needed to regularly soak up outside sources of radiation to prevent a meltdown which would kill him and a good chunk of the surrounding area if he blew. Stark attacked nuclear power plants as Cobalt Man, raising his public profile as the Avengers “failed” to stop him, until the Thunderbolts recruited him for their Project: Liberator. Despite this playacting, it appeared as if the real Cobalt Man was still dead and gone. [Avengers / Thunderbolts #1-6]

Not long after, however, a super-villain dressed as the Cobalt Man made a major impact on the country. Cobalt Man was partnered with Coldheart, Speedfreek and Nitro the Exploding Man in Stamford, Connecticut when they were accosted by the New Warriors. The devastation caused by Nitro’s subsequent explosion killed most of the Warriors and villains, murdering a total of 612 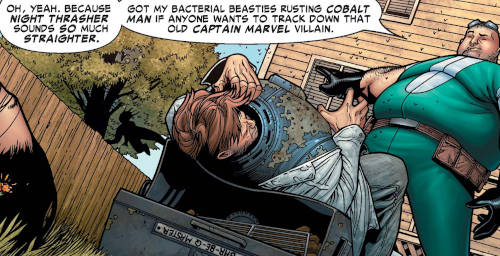 people and igniting cries for the Superhuman Registration Act. Unlike the Iron Man version, this Cobalt Man appeared to be a normal, non-powered man in armor before his death. Was this Ted Roberts’s misguided attempt at following in his brother’s footsteps? We may never know. [Civil War (1st series) #1]

The next time somebody turned up claiming to be the Cobalt Man, they turned out to be a Skrull imposter. Sent to Earth prior to the invasion to sow confusion and dissent, the Skrull Cobalt Man was able to do just that. He came into a conflict with the sleeper agent posing as the also-resurrected Captain Marvel. When he tried to convince “Mar-Vell” he was actually a Skrull agent named Khn’nr, however, the confused infiltrator violently rejected his true identity and beat “Cobalt Man” to death. Does the existence of one Skrull Cobalt Man explain the origins of the previously unidentified Cobalt Man from Stamford? Maybe. [Captain Marvel (6th series) #2-4]

The Cobalt Man from Stamford could have been one fallen Roberts brother or a resurrected one, or a sinister alien spy, or it could’ve been just some random schmo. That was the case with Bobby Lame Wolf from the Navajo nation, who found a suit of Cobalt Man armor seemingly by chance. He got drunk in the suit, called himself the Cobalt Tomahawk, and tried to rob the reservation’s casino while demanding his girlfriend love him more. The fearsome Cobalt Tomahawk was brought down by Jason Strongbow, the Rez’s local hero named American Eagle. [Thunderbolts (1st series) #112] Something similar happened when a group of men found or commissioned a set of armors as the Cobalt Men. After the revocation of the Superhuman Registration Act, they still remembered Stamford and wanted to take a stand against super-heroes. When Speedball

and the Avengers Academy brought their student to Stamford and the site of Speedball’s greatest mistake, the Cobalt Men were there to strike. They were defeated by Speedball with no loss of life and very little property destruction. Afterwards, it was determined the Cobalt Men weren’t even Stamford locals, but loyalists of the fallen Norman Osborn who were trying to stir up controversy. [Avengers Academy #10]

All this speculation went out the window when the Mercs for Money started hunting radioactive super-beings for capture and targeted the Cobalt Man. The self-identifying Ralph Roberts was not only alive, he was wearing the radiation containment armor Tony Stark used while with the Thunderbolts. Iron Man’s cover story for posing as a resurrected Cobalt Man was, apparently, true. Perhaps this was a remarkable coincidence, or maybe the Cobalt Man’s initial rampage WAS started by Ralph Roberts, and the Avengers took advantage of it to replace him with Iron Man after capturing and interrogating the real Cobalt Man.

This Cobalt Man mentioned he only came out of retirement after hearing about Deadpool and the Mercs targeting other radioactive beings like him. He gave the Mercs a good fight, wearing a Cobalt armor that substantially increased his size and power, but was ultimately defeated and turned over to Umbral Dynamics. Deadpool ended up having second thoughts about the job, though, and he went back to rescue Cobalt Man, Radioactive Man, Negasonic Teenage Warhead 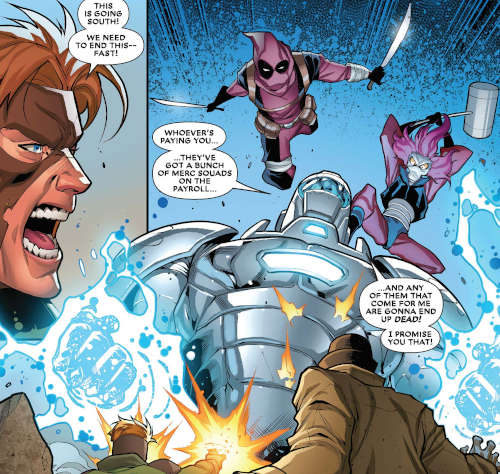 and the other captives. It turned out Umbral was the puppet of Caroline le Fay, who was draining radioactive energy from her victims to revive the dangerous Russian mutate known as the Presence. Cobalt Man and the others were freed by Deadpool and his allies, and fled from the site where they had been imprisoned. [Deadpool & the Mercs for Money (2nd series) #3-5]