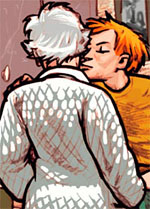 Like so many young mutants, the development of his powers brought Liam Connaughton further pain. Liam was born in Belfast to a Catholic family and, based on a comment from his mother, was likely an only child. His father allegedly had some connection to republican groups but to what extent is unknown, as he was deceased by the time of Liam's reached his teens. As an adolescent, Liam was living a fairly simple life on a pig farm in the countryside with his mother. He was friends with a girl of a similar age named Bridget and her elder brother Colin. Apparently following the death of Bridget and Colin's own father, Liam's father took Colin under his wing, resulting in all three children developing a very close bond that survived even after the death of Liam's father.

Liam became conscious of his ability to trigger explosions while walking in the local town when he accidentally blew up the exterior of a nearby pub. Liam was extremely distressed following the incident and was found by Colin wandering the streets, saying “I didn't mean to do it.” A week later, Liam was trying to understand what had 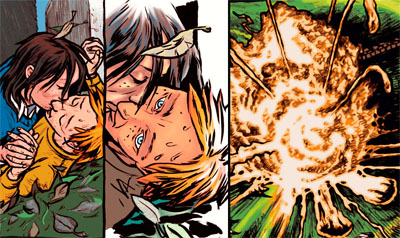 happened when he was suddenly woken up by Bridget, who was at his bedroom window. Realizing that stress might be triggering his ability, he scolded her for startling him. After a quick breakfast, Liam and Bridget headed to the idyllic green countryside, where they intended to spend some time together. When they reached a local graveyard, Bridget told Liam that they were meant to be together forever and kissed him. Possibly due to arousal, Liam's powers manifested and he created an explosion in a nearby sheep pasture.

The incident was investigated by the Gardai, who interviewed both Bridget and Liam, but given the absence of shrapnel and that only sheep were hurt, it went no further. Colin, however, had started to theorize that Liam was a mutant. Seeing an opportunity, he told his superiors in the terrorist organization of which he was part and they decided they wanted to recruit Liam. Colin confronted Liam about the explosions and manipulated him, using their close relationship. He told him that, given his late father's political identity, this is what he would want him to be doing. Sensing Liam's reluctance, Colin stressed there really was no way that Liam was getting out this.

The first time Liam met the gang did not go well, as Liam’s fear led him to accidentally blow up their car. He confessed to Bridget later that he knew he was different and was terrified that he was going to be forced to hurt someone. However, Liam had no choice when the group took him at knife point on his first mission, which was to blow up a new park that was being unveiled in honor of a fallen solider, as part of the peace process. Still wishing to avoid hurting anyone, Liam blew up the crane placing the statue on its pedestal, much to the annoyance of the group's leader, Seamus, who wanted a body count. Following this incident, Colin had an attack of conscious and tried to speak up for Liam but to no avail. The conversation was overheard by his sister Bridget, who confronted Colin. When it became clear that he could not help, Bridget came up with own plan to free Liam.

Seamus took Liam and Colin to a church at another event that was to recognize the ongoing the peace process. When the two began to argue, Colin pointed out to Seamus that friends and family members of theirs were at this event and didn't want go through with the attack. Seamus didn't care and put a gun to Liam's head, screaming “DO IT!” As Liam looked down at the event, he saw Bridget and his mother. Their presence, as Bridget presumably planned, gave Liam the courage to rebel and he consciously manifested his explosive power for the first time, blowing up himself and the surrounding area, safely away from any potential civilian casualties. 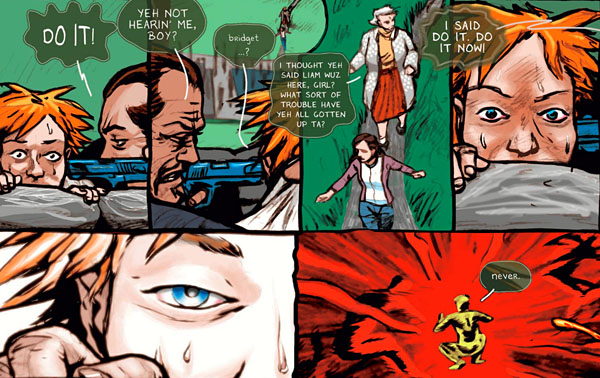 In the aftermath, Liam's mother was told he had perished in the explosion. Colin, who had survived, lamented from his prison cell that when they were recovered Liam he was still alive, moaning Bridget's name. In reality, Liam had been recovered by the British Ministry of Defence, who wanted him euthanized as an uncontrolled threat. Liam was injected with an unknown substance and appeared to die. [Muties #6]

Years later, Liam was nevertheless very much alive and living off the grid. Although the means of his rescue were unknown, the Ministry of Defence's euthanasia program had since been shut down. With a new lease on life, Liam went on to be recruited along with several other mutants who were born in Ireland and the British Isles for a far more magnanimous purpose under the leadership of Legion, Charles Xavier's son. Anti-mutant sentiment in the United Kingdom was being stoked by the arrival of President Abdi, a despot from the country of Aqiria. Legion tasked Liam, along with other mutants, to create good publicity for mutant-kind to undo Abdi's influence. 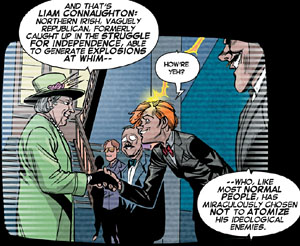 In a full circle moment, Liam met the Queen of the United Kingdom, Elizabeth II, as part of a broadcast (created by Legion's powers) and hosted by intergalactic rock star Lila Cheney. Liam's role was to show that it was possible to meet ideological “enemies” in friendship, as opposed to violence. Legion's plot seemed to be a roaring success, with Liam and the other's actions making England a far more hospitable place for mutants and a beacon to other countries like Aqiria, which started to move away from Abdi's hate filled-politics. [X-Men Legacy (2nd series) #13-14]

When Liam next appeared, he was one of the many mutant psyches that were consumed by an out of control Legion, in his persona of the World Worm. Legion managed to reassert control thanks to the efforts of his love, Blindfold, and all the mutants were restored, presumably including Liam. [X-Men Legacy (2nd series) #23-25]