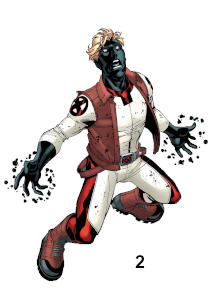 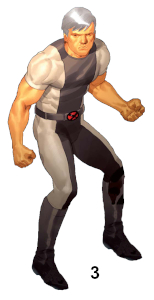 1) As a member of Danielle Moonstar's New Mutants squad, Josh received the codename Elixir and a customized version of the team uniform. Made in alternating patterns of white, gray and gold, the costume had an 'X' design evoked on his midsection and a more traditional X-Men 'X' insignia on his chest. It came with gold gloves and gold and white boots. Josh modified his costume to be sleeveless and show off his arms. [New X-Men: Academy X #2]

2) Following M-Day, the remaining members of the New Mutants and Hellions squads were consolidated into a New X-Men training squad. Elixir and the other members were given individualized costumes during the changeover. As the team healer, Elixir's costume seemed to deliberately evoke an ambulance or emergency rescue motif. It was a white uniform with red trim around his neck and chaps. He wore a brown belt, boots, gloves, and a sleeveless jacket, with a red 'X' on his shoulders. In this costume, however, Josh discovered the dark side of his powers and turned his golden skin to jet black. [New X-Men (2nd series) #24]

--) The New X-Men squad were issued standardized team uniforms sometime after they formed. These were the traditional yellow and black design popularized by the original New Mutants as a group costume. Although Elixir was given one of these costumes, the team disbanded shortly thereafter, before he had any chance to wear it on missions. [New X-Men (2nd series) #43]

3) Elixir kept to the X-Force signature color scheme with a gray and black costume that clashed with his bright gold skin. His short sleeved gray suit had a black stripe down the center, with an 'X' insignia on his belt. [X-Force (3rd series) #8]

4) With the Utopians, Elixir wore a costume with a similar pattern to the others. This black uniform covered him from the neck down. It had a gold wedge covering his chest, gold shoulder padding, boots and a symbol on his gloves. [All-New X-Men (1st series) #40]

5) With the Resurrection Five, Elixir wears a recolored version of his Utopian outfit. The leggings and chest area are white, while the shoulder padding is gold. [House of X #5]