Mutant Rights League/Coalition,
counsel to the X-Corporation and X-Men

• Haemo-dracomorph, able to transform into a mighty dragon upon exposure to blood, drawing upon extra-dimensional mass to increase dramatically in size, gaining superhuman strength, increased durability thanks to her thick dragon scales, the ability to breathe fire, and wings enabling flight

Evangeline “Vange” Whedon had it all… a loving family, great job and was due to get married to the man she loved. Then everyone discovered her secret: that she was a mutant who could turn into a dragon when she came into contact with blood.

Within an instant, her life fell apart. She was immediately dismissed from her job as a prosecutor for the homicide bureau, her parents disowned their “monster” of a daughter, she was kicked out of her apartment and her fiancé broke off their engagement. Despite all the setbacks, she still held on to her desire to make the world a better place. With her secret out, she no longer shied away from her mutant status and set up the Mutant Rights League, an organization that helped mutants out from a legal standpoint. [X-Treme X-Men (1st series) #40]

It was through this work that she entered the X-Men’s lives, when Sage and Bishop were arrested 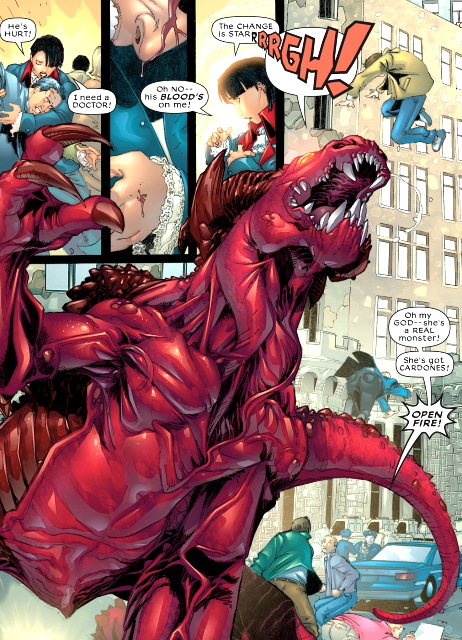 by a local police department. Vange swore to use her power to free them and marched to the police station to help. Once there, she found a large group of anti-mutant protestors who had gathered outside and were looking to cause trouble. When a policeman was injured, Vange rushed to help him but accidentally got a drop of his blood on her skin. That was all that was needed for her transformation to take place and she turned into an enormous, red dragon in front of the horrified protestors. As the transformation had caught her off-guard, Vange flailed around in a confused state as the local police attempted to shoot her. Her salvation came from Bishop, who managed to confront Vange and calm her down enough for her to regain her senses and turn herself back into her humanoid form. Distraught over the commotion she made, she was more than willing to let herself be arrested but, fortunately for her, the police realized it wasn’t her fault and let her go. [X-Treme X-Men (1st series) #21]

Vange began to help the X-Men when she could, such as representing an anti-mutant terrorist called Marie D’Ancanto, to whom the X-Men had decided to give a second chance. Vange hired D’Ancanto as her assistant and the two began to look into Elias Bogan, a mysterious man who had set his sights on destroying the X-Men. Vange assisted the X-Men where she could but, despite possessing a dragon-form, she was deemed to have too little combat experience to just throw into a battle. Instead, she used her legal skills to investigate his business dealings, helping narrow down the team’s search for the elusive man. Bogan was eventually brought down and Vange went back to her regular job once again. However, when Magneto launched a deadly attack on New York, killing thousands, Vange rallied as many of her contacts as she could and joined up with the X-Men to help with the aftermath. [X-Treme X-Men (1st series) #34-36, 40-46]

With anti-mutant hysteria on the rise following Magneto’s attack on New York, Vange briefly moved into the X-mansion to assist the team with any legal issues. She was required almost 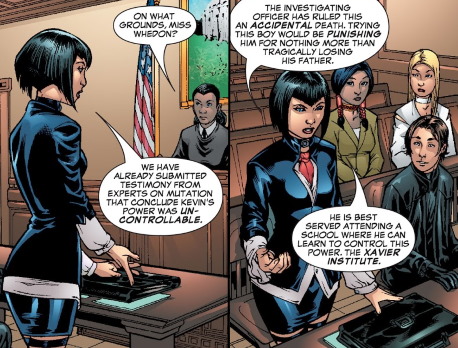 immediately when Storm’s team, the newly formed XSE, was implicated in an explosion at a school. Vange represented the team and acted as a spokeswoman to the media whilst she sorted the situation out. She also acted as Wither’s attorney when he was accused of murdering his father. With her legal expertise, she was able to convince the judge that it was a case of accidental death and that the young boy belonged with the X-Men. [Uncanny X-Men (1st series) #444-445, New X-Men (2nd series) #6]

Vange’s life was about to get turned upside down once again by M-Day, when almost all the world’s mutants were depowered. She was one of less than 200 mutants to retain her powers, but almost all of her clients lost theirs. Whilst her career as a mutant rights lawyer seemed in jeopardy, Vange leapt to action as she realized the few mutants who were left needed legal help now more than ever. [Uncanny X-Men (1st series) #466]

Whilst she operated on her own for a while following M-Day, she soon joined the X-Men on the their island nation of Utopia. The island wasn’t as safe as everyone had hoped, though, as Vange was soon called into action when Bastion and his army of Nimrod Sentinel’s invaded Utopia, looking to wipe out the entire mutant race. [Second Coming crossover]

Vange stuck around for a while and was on hand when the parents of one of the X-Men’s students sued the team for custody. Teon Macik’s mutant abilities meant he functioned in a primal, instinct-driven basis and he struggled with the intricacies of modern social interactions. He had run away from his parents as he was looking for a “mate” when Hope Summers located him and used her powers to form a bond with him. When Vange took up the case, she was rather pessimistic of the X-Men’s chances of keeping custody. 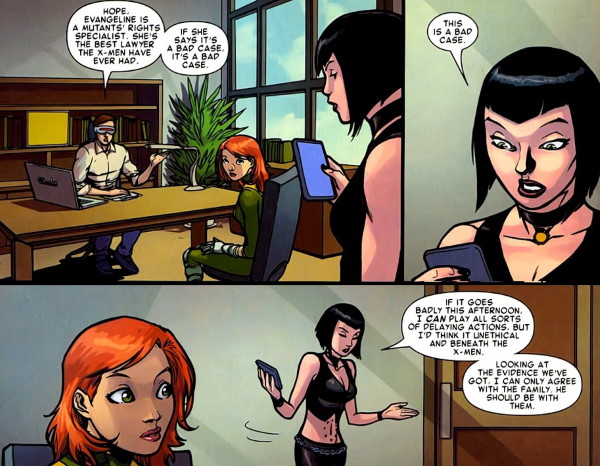 Teon’s mental capacity had barely improved in the time he had been with the X-Men and Vange herself was wary of the master-puppet relationship Hope had with the boy. Despite her misgivings, Vange represented the X-Men in court and was stunned when Teon took the stand and his mental functions suddenly improved. The courtroom environment had triggered his hyper-instincts, forcing his mind to briefly function on a higher level. Vange did not need to do anything, as Teon argued his own case, eventually winning it. [Generation Hope #8]

Vange parted ways with the X-Men for a while, as they had little need for her legal expertise. This was probably for the best, as many of them were seemingly killed during a battle with Nate Grey some time later. With mutant numbers dwindling once again, Vange kept close tabs on the remaining X-Men and joined them for the funeral of Wolfsbane, who had recently been murdered. [Uncanny X-Men (5th series) #17]

With the X-Men once again setting up their own island nation of Krakoa, every mutant on Earth has been invited to live there. It’s only a matter of time before the team gets into some legal trouble again, needing Vange to swoop in to save the day. 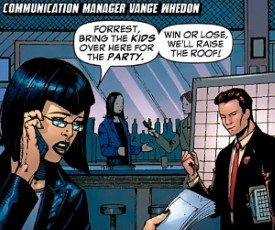 In the reality that showed The End of the X-Men, Vange worked as the communication manager for Kitty Pryde’s campaign to become Mayor of Chicago. When Kitty won, Vange stuck around and helped her to become the President of the USA, becoming part of the White House staff and helping usher in a brighter future for mutants.