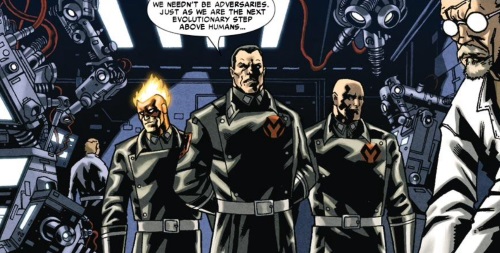 In the reality of the House of M, Exodus was granted control over Australia. However, he took a slightly different view to humans that many other world leaders did. Whilst most humans were simply treated like second-class citizens, Exodus saw to it that those in Australia were rounded up into camps ready for extermination. Unfortunately for him, his forces made the mistake of taking on the Hulk and the green goliath decided to fight back. With the help of AIM, Hulk calmly walked into Exodus’ base with the intention of talking things out peacefully. Exodus decided to take the more violent option but underestimated his opponent and was forcibly removed as leader of the country.

In the Age of Apocalypse, Exodus had been captured and experimented on by Apocalypse’s forces. Freed by Magneto, he chose to follow his savior and joined the X–Men, even going on to having a relationship with Dazzler. Magneto knew early on how powerful Exodus really was but kept it from the man in case he ended up against them. Having need for a teleporter, Magneto divulged to Exodus the fact that he possessed the ability and the man was surprised to discover he could travel across the county in the blink of an eye. Later on, he was sent on a mission to retrieve Magneto’s son Charles from the Morlock Tunnels but, once inside, he found out that the young boy had been kidnapped by the traitorous Strong Guy. Exodus was not seen again after the fall of Apocalypse and, given the numerous times the world has been revisited, it is highly likely he perished in the meantime, like so many other X-Men.

Exodus also made a brief appearance in a similar reality depicted on Battleworld. On this world he was part of a group tasked with saving Douglas Ramsey from the might of Holocaust. Exodus sacrificed his life to distract Holocaust, allowing Nightcrawler to teleport away with Douglas. 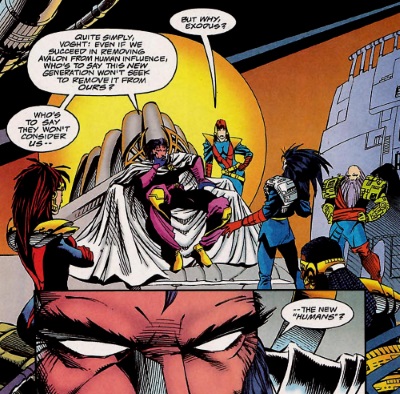 In the reality depicting What If… Magneto ruled all mutants, Professor Xavier had allowed Avalon to continue and gave all mutants the choice of joining Magneto on his asteroid base. In the ten years that had passed, the various mutants who accepted fell to infighting and split into a number of different factions. Exodus led one such group whilst his arch-rival Fabian Cortez led another. They finally called a truce when a baby was born that was deemed to be the next stage up in evolution from mutants. Threatened by its existence, the two groups of Acolytes worked together to rid the threat of the baby. Exodus showed no remorse with the death of the infant as he saw it as a warning sign. A permanent alliance was struck up between Exodus and Cortez, neither side realizing that Magneto had manipulated the child’s genetic tests in a bid to finally bring peace to Avalon.

In Matthew Malloy’s timeline, Exodus had put aside his hatred for the human race and had even gone as far as working for SHIELD. He was their chief telepath and as such he was on hand 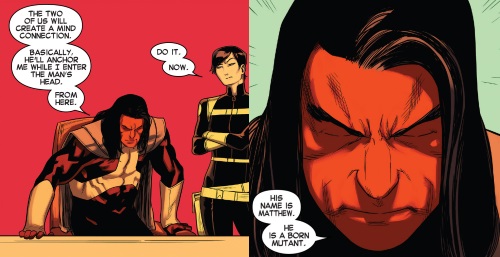 when a powerful new mutant called Matthew Malloy suddenly appeared. Exodus was unprepared for how powerful this mutant was and, when he made telepathic contact with the boy, he was killed for his troubles. Malloy’s killing spree didn’t stop there and after the death of a number of X-Men, Tempus, an X-Men student with time travel powers, went back in time and warned Professor X of the situation. The Professor decided that the only course of action to take was making it so Malloy’s parents never met and so the timeline was reset and all of Malloy’s deeds were undone. 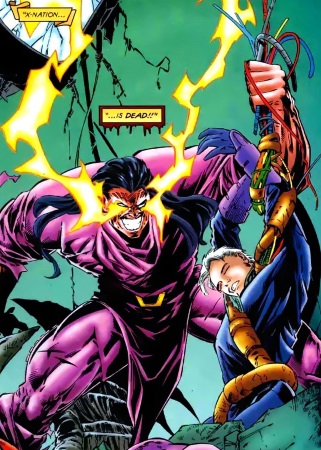 In the year 2099 Exodus was just as arrogant as he had ever been, attempting to co-opt a group of mutants known as X-Nation into becoming his new Acolytes. When they declined his invitation he turned on them and showed them exactly how powerful he was. After his display of power he briefly managed to convince them to join him, until they saw how little he cared for the regular humans of the world. X-Nation turned on him again and they would have lost had it not been for one of their own taking Exodus on alone.