--) In the Ultimate Universe, Jimmy wore street clothes more often than not instead of a costume. He was depicted on several covers in a version of Wolverine's traditional yellow costume, and was seen inheriting it in Ultimate Comics Wolverine #4. However, he never actually wore the suit on-panel. 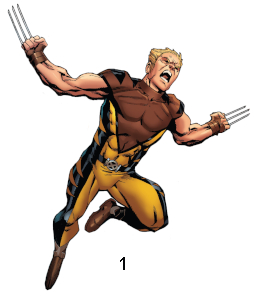 1) Jimmy first adopted a costume after joining the X-Men in Earth-616's reality. The suit was based on the orange-and-brown colors of the second costume for this Earth's Wolverine. He did not use a mask. [X-Men: Blue #7]

2) During the Mothervine crisis, the replacement X-Men all adopted uniforms with a matching color scheme. Jimmy's suit was predominantly black with a blue 'X' on the front of his jacket, 'X's on his shoulders and 'X's on his boots.  [X-Men: Blue #25] 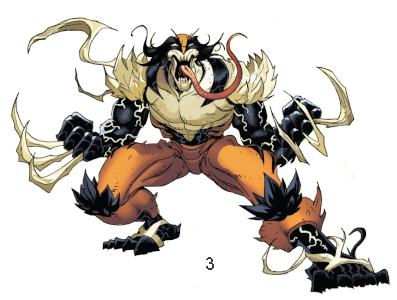 3) As a Poison, Jimmy's original body should have been consumed and replaced by an armor-like skeletal structure resembling his old body. However, his Poison look functioned more like the Klyntar symbiote that helped form it, a "second skin" that could flow on or off on command. When active, Poison-Jimmy looked like a mutated version of Wolverine, complete with the traditional mask as part of his head. [X-Men: Blue #29]