Eric Gitter was a young man living in La Jolla, California. A petty criminal by design, Eric was friends with Leon Nunez, a tattoo artist working out of Ink, Inc. Leon finally convinced Eric to let him try out his art on him, and he gave Eric the tattoo of an explosive bomb-burst symbol on his bicep. Later, Eric felt a strange sensation in his arm and punched a brick wall with enough explosive force to blast right through it. Eric told Leon what had happened and Leon suggested Eric might be a mutant.

In order to find out if he really had "tattoo powers," Eric had Leon ink a new tattoo in his palm, a Biohazard symbol. As they were finishing up, the cops entered the tattoo parlor to arrest Eric for 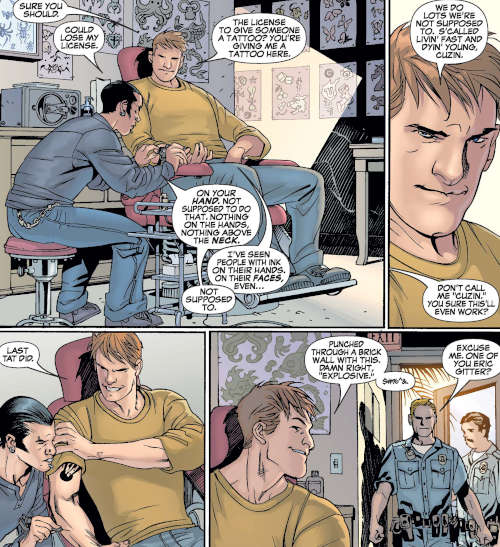 the stolen car he had parked out front. Eric tried out his new tat and, sure enough, his palm could now cause toxic sickness and vomiting on contact. Unfortunately, there were two cops, and Eric was knocked out from behind and arrested.

Eric was released from jail by a man identifying himself as Cyclops of the X-Men, using an image inducer to pose as a guard. Under the alias of "Ink," Eric joined several former X-Men students and trainees as a new squad of Young X-Men under Cyclops' supervision. At the Danger Cave, near the ruins of the old X-Mansion, Cyclops assembled his troops and prepared them to operate as a unit. They spent the better part of a month training together to hunt other former X-Men from the New Mutants, who had apparently gone bad and joined up with the Hellfire Club. [Young X-Men #1]

However, Eric had also received a better offer from Donald Pierce, a rabid anti-mutant cyborg formerly of the Hellfire Club himself. Pierce wanted Ink to spy on the X-Men for him, and 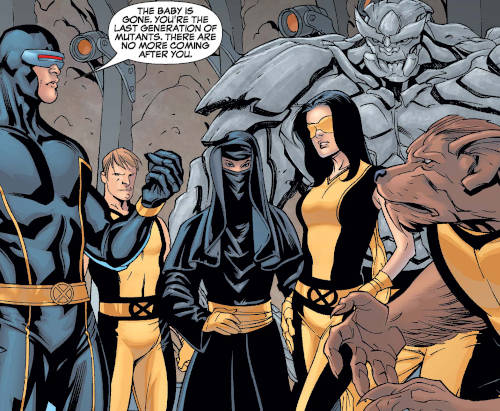 compromise their mission when the time was right. Eric had no real sense of loyalty to the X-Men and was willing to take Pierce's money. During the weeks training with the X-Men, Ink decided to up his tattoo arsenal several times, returning to Leon for more work. He had metal plating drawn over one hand to increase its strength and grip.

When the mission date struck, Ink and Blindfold were sent after Danielle Moonstar while Rockslide, Dust and Wolf Cub sought out Magma. After Moonstar was incapacitated, Ink knocked out Blindfold too and delivered them both to Pierce. He reported Moonstar got the drop on him and took Blindfold hostage. While talking, though, Ink was surprised to hear from Rockslide that 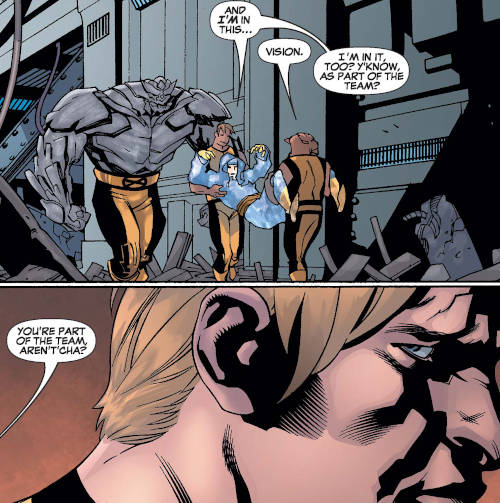 Blindfold was able to see the future, and she had passed on a vision where their team was fighting Donald Pierce together, including Ink. Eric didn't know what to make of this, and started to smell a set-up. He returned to Leon, hoping to get a new tat that would make him smarter. They brainstormed a bit, and Leon suggested a new tattoo on his temples, simulating telepathy. For good measure, they also tattooed angel wings on his back for flight.

With Moonstar "missing" and Magma on lockdown in the Danger Cave, Cyclops sent his team directly to the Hellfire Club to assault Cannonball and Sunspot. Magma escaped with the aid of a new mutant named Greymalkin, and together they discovered "Cyclops" and Donald Pierce were one in the same. The Young X-Men realized they had been used by Pierce to settle old scores, and Ink felt doubly used as even he didn't know Pierce was playing both sides. Eric volunteered the location of Pierce's hideout, sidestepping questions for the moment about how he knew that. The Young X-Men and New Mutants sought out Pierce and rescued Moonstar and Blindfold. In the battle that followed, however, Pierce killed Wolf Cub before being captured by the mutant teams. [Young X-Men #2-5] 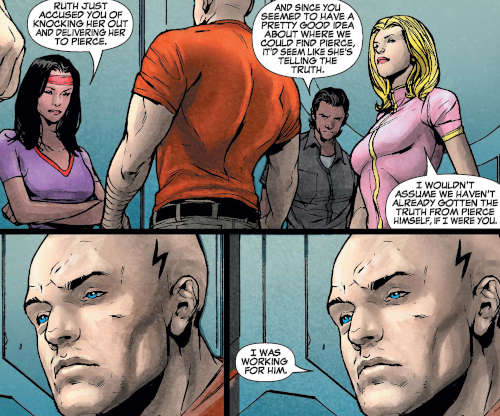 In the aftermath, Ink came clean about his role in the abductions and working for Donald Pierce. There was no love lost between Ink and Rockslide for his role as a traitor. Despite this, the real Cyclops decided to keep the Young X-Men together as a training squad, now that the X-Men had reformed in San Francisco. Sunspot and Moonstar remained on-board as field instructors for the group. [Young X-Men #6]

Eric's role with the X-Men became more complicated once Rockslide reasoned out Ink wasn't really a mutant. Hank McCoy's tests confirmed it -- Eric didn't have an X-gene. The X-Men realized Eric Gitter wasn't manifesting powers through his tattoos, but his tattoos were manifesting powers for him because his tattoo artist Leon Nunez was the real mutant. Stripped of his identity as a mutant and already getting constantly ragged on by Santo, Eric decided to quit the X-Men. 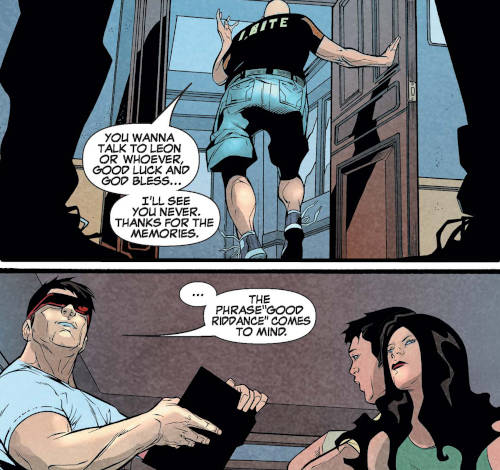 Eric had assumed Leon was as clueless as he was about the "true mutant" but that wasn't the case. When Sunspot and Moonstar took the Young X-Men out to meet Leon, they learned he was well aware of his abilities and had been using Eric as a test case. Once he learned his limitations, Leon started tatting up local gang members to work off a debt to them. These tattooed "Y-Men" surprised the Young X-Men with a small army of super-powered gang members. [Young X-Men #7-8]

Ink was sought out by Cipher, the Young X-Men's secret stealth member, who warned him the others were in trouble. Eric went to Leon and confronted him, and the tattoo artist admitted to misleading Eric to think he was a mutant while trying out new tats on him. Ink and Cipher pressed Leon into giving Eric two new tattoos. First was a Caduceus in his palm for healing purposes. Then came the big one: A Phoenix raptor tattooed over his eye. Eric explained to Leon the legend of the Phoenix Force from the X-Men's files, hoping to channel its raw power. This proved to be 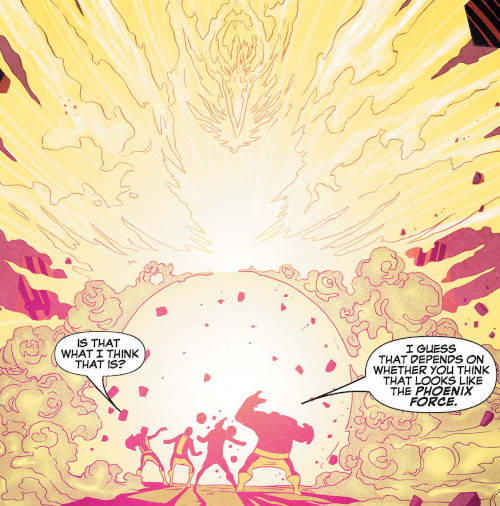 incredibly effective: Ink dropped in on the Young X-Men's battle with the Y-Men and used the Phoenix power to drain all the gang members of their powers. Moreover, Leon Nunez collapsed after completing the Phoenix tattoo. It seemed the tattoos drew their strength directly from Leon's willpower. Sustaining the quantity of Y-Men tattoos and the quality of one Phoenix Force tattoo was too much for Leon, and his body shut down, sending him into a comatose state. Regardless of his past, Eric Gitter stepped up when his team needed him, and so Ink was welcomed back into the X-Men. [Young X-Men #9]

Although Ink was accepted by the team, his Phoenix tattoo was a cause of great concern. Even a facsimile of the Phoenix Force was something to tread very carefully around. The Young X-Men seemingly suffered another loss when Donald Pierce escaped captivity. Dust's silicon structure had been unstable since her fight with Magma weeks earlier, and she began to break down and disperse after one final attack on Pierce. Ink tried to heal her with his Caduceus tattoo, but it wasn't up to the task. All lifesigns faded and Dust was declared dead by the X-Men's doctors and scientists.

Eric, surprisingly, felt sincere grief at the passing of Sooraya Qadir. Despite their differences, Dust was a genuinely kind person who never ostracized Ink the way Rockslide did. Kneeling over her 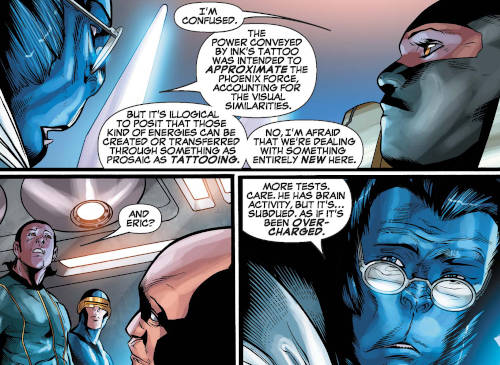 body, Eric tapped into his Phoenix tattoo and fed his power into Sooraya. Miraculously, Dust was restored to life by the effect, but Eric's Phoenix tattoo faded from his face. Moreover, Ink fell into a comatose state, showing very little brain activity. What exactly occurred during this transfer of energy stymied even Hank McCoy, and the Beast promised to look after Eric Gitter as his patient in the X-Men's medical facilities in the hopes that he would one day reawaken. [Young X-Men #11-12]

How long Eric's coma lasted is a subject of some debate. He seemingly reappeared among the team rather quickly, showing up in the background of the Humanity Now! riots in San Francisco, and the subsequent occupation by Norman Osborn and H.A.M.M.E.R. [Utopia crossover] However, he was absent in other "roll call" events, such as when Cyclops and Wolverine split over the direction of the X-Men, with the younger students being divided between Utopia and the new Jean Grey School for Higher Learning. [Schism, Regenesis] Nevertheless, he did eventually show up at the Jean Grey School among the other students. [X-Men (4th series) #19]

Leon Nunez apparently woke up at some point as well. Ink was now sporting not only new tattoos but new powers to go with them. He became active as one of the X-Men's student reservists out of the Xavier Institute for Mutant Education and Outreach, when the X-Mansion was moved into Central 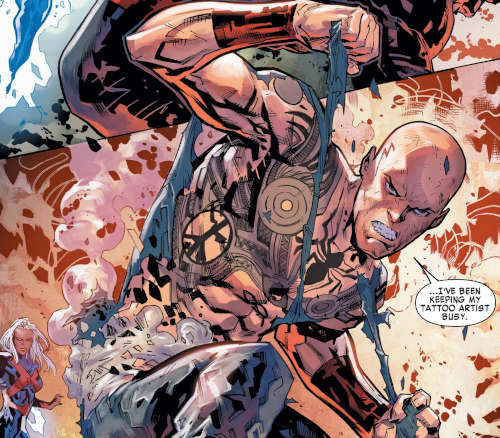 Park in New York. [X-Men: Gold #13] Old Man Logan chose him and Armor as new recruits for the main team when Nightcrawler and Kate Pryde were kidnapped to the Negative Zone by a new foe named Kologoth. Eric and the others chose sides during a civil war to get their friends back, and opposed the rising of a destroyer-god named Scythian. [X-Men: Gold #17-20]

Ink proved to be reliable in the field during the Negative Zone mission. When the main team was set up by Mesmero to be arrested, Iceman and Rogue recruited Eric again for mission duty. He 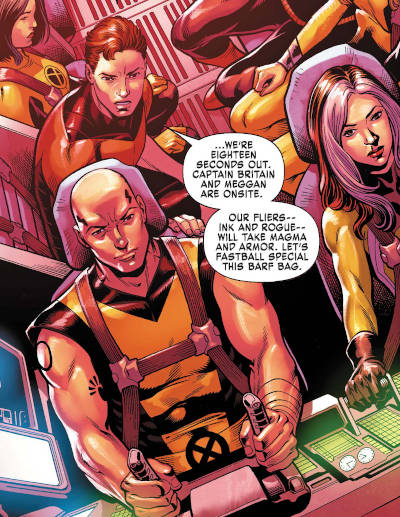 and Armor joined Magma, Magik and the new Pyro as the team's active roster for several missions. They fought against the Inhuman threat of the Shredded Man and the rise of Scythian from the Negative Zone to seek vengeance on the X-Men. [X-Men: Gold #23-25] Eric continued to associate with the group, and was last seen attending the wedding of Colossus and Shadowcat-- I mean, the wedding of Gambit and Rogue! [X-Men: Gold #30]

Even with his brief showing in the spotlight, Ink has faded into the background again. Because he is technically not a mutant, it's unclear how Eric's X-Men membership has been affected by the move to the mutants-only nation of Krakoa.