Marjorie Brink developed her unusual ability quite late in life. Marjorie had briefly dated Stephen Strange, the future sorcerer supreme, before he graduated from medical school. Despite the fact that their relationship didn't last that long, Marjorie had been in love with Strange. She took the 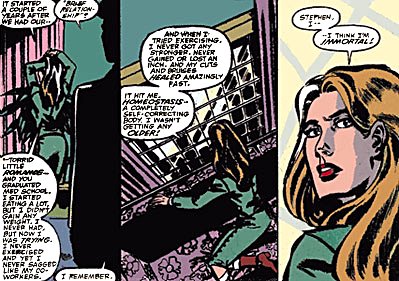 breakup quite hard and began over-eating. However, despite this Marjorie didn't gain any weight. Around this time she noticed that she had never really gained or lost weight. She also noticed that she didn't get any stronger when she exercised. Marjorie began to test the limits of these abilities. She found out that she healed cuts and bruises amazingly fast, starvation and poison had little or no effect on her and she wasn't aging. Marjorie referred to her condition as homeostasis. In essence, she was immortal.

Marjorie decided to treat her power as an opportunity to read all the books she had always wanted to and became a librarian. Marjorie believed that she could hide her ability in plain sight as she

believed that no one notices a librarian. She was cautious though and continually dyed her hair gray to avert suspicion. Some time later Marjorie heard that her former love, Stephen Strange had given up medicine and became a mystic of high renown. Marjorie reached out to Stephen hoping for an explanation of her powers and some indication of what the future would hold for her. Stephen attempted to show Marjorie her future using a spell, however both of them were inadvertently transported to the future.

Upon arriving in the future, Marjorie was shocked to see Jupiter orbiting Earth. She and Stephen were soon met by her future self. The future Marjorie explained that the sun had become possessed by a demon. The Demon Sun had consumed the inner planets of the solar system and Earth had been forced to relocate out of the sun's grasp. As time had gone on, mankind had lost the ability to fight back against the demon hordes of the sun but Marjorie, as a connection to the past, had given them back their fighting spirit. This Marjorie had become the leader of mankind and she was leading them into their final battle with the demonic sun, a battle she was confident they would win. As the future Marjorie bid them farewell, Marjorie and Stephen returned to the past. Marjorie was shocked by what she had just seen and questioned if it was real. Stephen assured her that this future was merely a possibility at this point. Nonetheless meeting her future self had changed Marjorie. She now felt her immortality had a purpose. She could go on with the centuries, knowing that she would be living memory of the past for the people of the future. [Marvel Comics Presents #61]

[NOTE: The source of Marjorie's powers has never been explained. It's possible her powers may be supernatural, as her future self appeared to be an adept sorceress. This seems unlikely though as Doctor Strange should have been able to sense if her powers were mystical in origin. Her description of her powers and their development suggested that she could possibly be a mutant. However this was contradicted by Hank McCoy in Wolverine: The Best There Is #1-6, when Cerebro indicated that none of the Unkillables possessed the X-Gene.]

As time went on, Marjorie's optimism about the future began to fade. She started to feel daunted by what awaited her. As the future shepherd of mankind, she thought she would have to learn everything there was to learn so she could defeat the Demon Sun. This fear made her susceptible 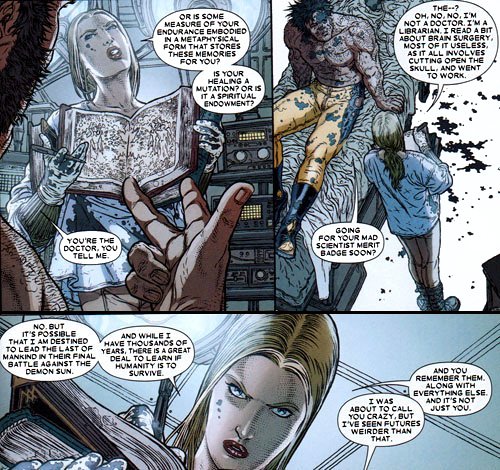 to manipulation by a villain named Winsor. Winsor was seeking out beings with healing factors or “unkillables” as he referred them in an attempt to cure the plethora of viruses that his body bred. Winsor played on Marjorie's fears and offered her the promise of vast knowledge that she could use to save the future if she helped him. At some point early on in their collaboration, Winsor began drugging Marjorie with a chemical secreted by the Corrupter, another villain he had captured. The Corrupter's sweat allowed him to control Marjorie and for the most part, nullified her conscience.

Marjorie's intellect and resourcefulness was invaluable to Winsor. She managed to source DNA samples from various self-healers and located at least half of Winsor's group for him. Some time after the group's creation, they captured the X-Man Wolverine. The group began to put Wolverine's healing factor through a variety of tests. Even though she was under the influence of the Corrupter's sweat, Marjorie didn't display the level of sadism that her teammates did when it came to testing Wolverine. However, she recorded the results of each “test” in her notebook. Despite her lack of a medical background, Marjorie displayed a great aptitude for anatomy during her procedures on Wolverine. Eventually she theorized that Wolverine's healing factor had undergone a constant mutation over the years. His healing factor was mutating itself in order to cope with the ever increasing severity of the injuries that were inflicted upon his body.

It wasn't long before Wolverine managed to escape his captors and neutralized most of the Unkillables. In the end, the only one left to protect Winsor was Marjorie. Wolverine confronted 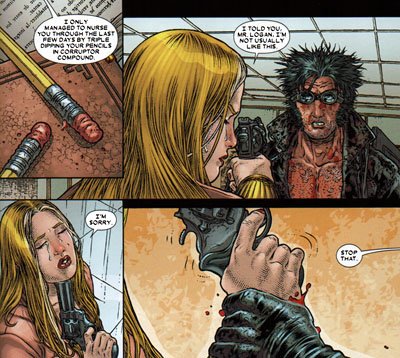 Marjorie with the knowledge that he could smell that she had been contaminated with the Corrupter's sweat. At this point, Winsor came clean and admitted that he was drugging Marjorie by dipping the pencils she used to write in her notebook with the Corrupter drug. Marjorie was wracked with guilt by what she had done under Winsor's influence. She quickly apologized to Wolverine and attempted to take her own life. Wolverine stopped her and subsequently defeated Winsor. As he dragged Winsor away, he told Marjorie that she was going to be okay, to do some good and save the future. [Wolverine: The Best There Is #1-6]

Marjorie's freedom was short-lived however. Winsor had been incubating antibodies and viruses in the bodies of these self-healers with the intention of harvesting them so he could distill a virus that could kill anything on Earth, Heaven or Hell. He had no intention of letting all of this work go to waste and quickly recaptured Marjorie and the other Unkillables. Once again he used the Corrupter compound to keep them in line.

Once more, Wolverine turned out to be Winsor's undoing. Winsor lured Logan to the location where he was keeping the other Unkillables. His trap was undone as Wolverine had been followed by his cohorts, the X-Men. While the X-Men battled Winsor, his telepathic son Flip freed Marjorie and the other Unkillables. Ultimately, the X-Men were defeated by Winsor but Wolverine managed to get the best of Winsor single-handedly. Just as Wolverine was about to kill Winsor, Marjorie cried out telling him to stop. Winsor had forced Marjorie to record his every word and action for months. This gave Marjorie an insight into his psyche and she knew exactly what he was now planning. Marjorie claimed that upon Winsor's death, the viruses in his body would kill everything in the surrounding area.

With this in mind the Unkillables and Wolverine dosed Winsor in Corrupter sweat and told him to contain all of the viruses in his body. As Winsor writhed in pain, Wolverine stated that he worried that Winsor wouldn't be able to nullify all the viruses he had grown but Marjorie assured him that Winsor's body would function as the perfect containment shell. With the viruses contained and the X-Men still unconscious, the Unkillables took turns with Winsor until he was finally dead. Marjorie's rationale for the murder of Winsor was that “Experience is Knowledge." [Wolverine: The Best There Is #11-12]