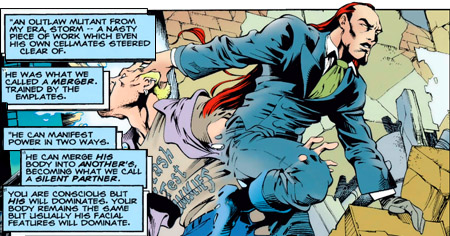 Mountjoy was a murderous criminal from Earth-1191, the future timeline of Bishop and the X.S.E. Not much is known about his personal history. He was purportedly trained by the Emplates, the vampire-like infected mutants propagated from the original Emplate’s feedings decades earlier. While Emplates only feasted on mutant bone marrow, Mountjoy’s powers gave him the appetite to absorb entire bodies into himself and slowly digest them for sustenance, or absorb himself into a victim to ride along indefinitely until he chose to strike. His great physical prowess and secondary mutation of a “basilisk field” that slowed his victims’ reaction time made him an effective predator. This and his own unscrupulous reputation led even others in the mutant criminal fraternity to stay clear of him. [Bishop #1] 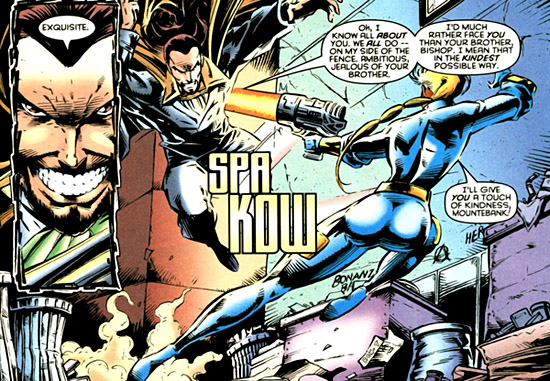 Despite his cunning and abilities, Mountjoy was eventually captured by the Xavier’s Security Enforcers. The plan that brought him down was formulated by Lieutenant Shard, on her path to promotion, but it was executed with the assistance of her brother Bishop and his Omega Squad. Mountjoy would blame both Shard and Bishop for his capture. [X.S.E. #3] Like many mutant criminals, Mountjoy was imprisoned at the Pool prison facility. One night, Trevor Fitzroy initiated a massive jailbreak, using his powers to create a temporal portal back in time to the era of the mighty X-Men. Bishop and Omega Squad were on scene at the Pool and followed Fitzroy and the escaping Lifers from the Pool. Bishop thought he had an exact count of the prisoners who escaped, but Mountjoy had bonded with Fitzroy’s lackey Bantam, allowing him to venture into the past without being accounted for. [Uncanny X-Men (1st series) #287] 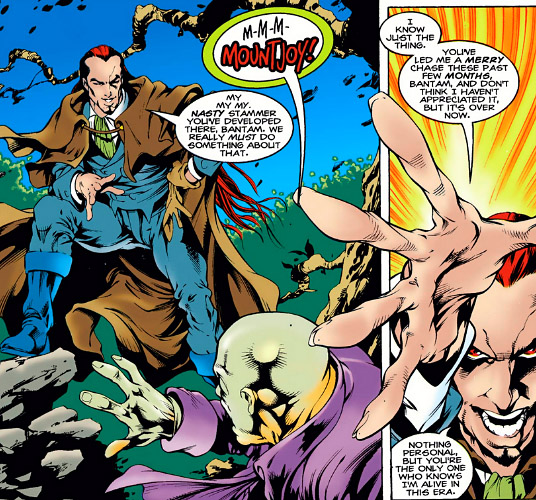 Mountjoy had always been meticulous about covering his tracks and wanted to eliminate Bantam, as he was the only person who knew Mountjoy had arrived in this era. However, Bantam was Fitzroy’s personal toady and never far from his side. That is, until Fitzroy was apparently killed fighting X-Force during the Upstarts competition, leaving Bantam alone. Mountjoy saw his opportunity and cornered Bantam in Central Park to silence his prey. Mountjoy was too caught up in taunting his victim, however, and a gang of street punks interrupted his feeding. Mountjoy relished in the exercise he got from taking down the gang, but it delayed him long enough for Bantam to escape. Mountjoy took one of the gang members as a “silent partner” to unobtrusively track Bantam down again.

Bantam sought out Bishop, who had joined the X-Men of this era, seeking his protection. Mountjoy got the drop on Bishop’s teammate, Storm, and performed a “hostile takeover.” Bishop was undeterred and fought back as if he were willing to kill both Mountjoy and his teammate. Mountjoy managed to slow Bishop with Storm’s powers and some po 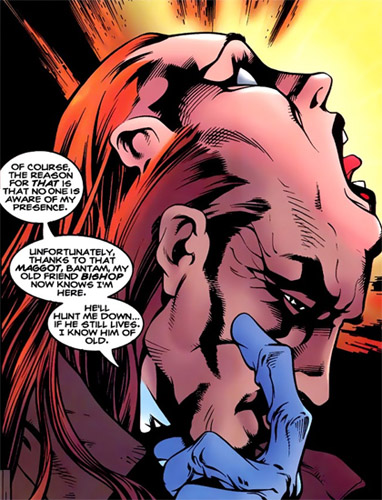 isoned crossbow bolts. However, fighting both Bishop and the willful Storm was too much, so he expelled his prey. He cut his losses and ran before Bishop or Storm could recover enough to end him. [Bishop #1]

Mountjoy was a creature of habit, and Bishop correctly deduced his next move would be to locate and eliminate the gang member “proxy” before he could spread tales of a body-snatching mutant. Mountjoy knew how familiar Bishop was with his habits, though. Once he had fed to replenish himself, Mountjoy prepared to strike at Bishop at the local police station where the proxy had made a report. He overreached when he tried to ambush and absorb Bishop, as the X.S.E. officer instinctively slammed himself into a wall to shake off his attacker. Mountjoy stole a police car and led Bishop on a car chase until they both crashed and the car exploded, knocking them for a loop. [Bishop #2] 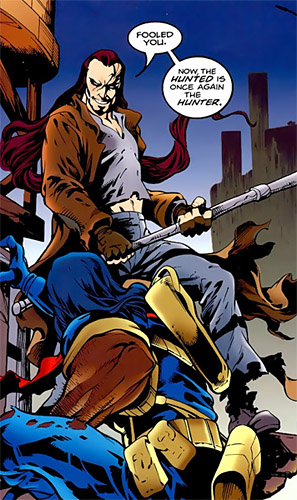 Mountjoy and Bishop were both rattled by the explosion, but Mountjoy recuperated faster than his opponent by absorbing a homeless man to speed his recovery. He tired Bishop out by fighting over the rooftops of Manhattan and absorbed two more men for added strength. Bishop still managed to strike down Mountjoy, forcing him to divest his victims. Bishop was struggling between his duties as X.S.E. and the X-Men’s code of not killing, and so he hesitated to shoot when he had Mountjoy pinned. The shape-stealer escaped again, but this time he doubled back and caught Bishop in the subway. Absorbing victims was always risky if they had the strength to fight the merger, so this time Mountjoy merely possessed Bishop. In order to hurt Bishop and cut off any trace of witnesses, Mountjoy prepared to use Bishop’s body to infiltrate the X-Mansion and kill the X-Men. [Bishop #3]

At the mansion, Mountjoy went to work using his basilisk field to dull the responses of Psylocke’s ninja training. He abandoned Bishop as a “ride” to absorb his surprised prey. Shortly after, Mountjoy managed to accumulate Gambit and Archangel as “assets” too. Shard existed in this timeline too (even if only as a holographic projection) and she assisted Bishop in guiding Mountjoy into the Danger Room to contain him. As the quasi-tangible Shard grappled with Mountjoy, Bishop blasted him with all of the accumulated energies running through the Danger Room’s exposed electrical conduits. Mountjoy went down, but he refused to beg for mercy. In fact, he promised Bishop he would kill again if left alive. Nevertheless, Bishop held up his oath to the X-Men and captured Mountjoy rather than killing him. [Bishop #4]

Mountjoy escaped from the authorities, making his way to the United Kingdom and the London branch of the Hellfire Club. The Red and Black royalty of the English Club had a daring plan to harness a demon under London and unleash computer-guided hellfire attacks under their command. Mountjoy positioned himself close to power, inhabiting the body of Jane Hampshire, the official Scribe of the Inner Circle. His presence was apparently known to Emma Steed, the Black Queen and the only other mutant active in the Circle. Steed, in turn, had an alliance in place with the entity known as Onslaught, creating a complicated web of inevitable betrayals in the Hellfire Club as their scheme progressed. 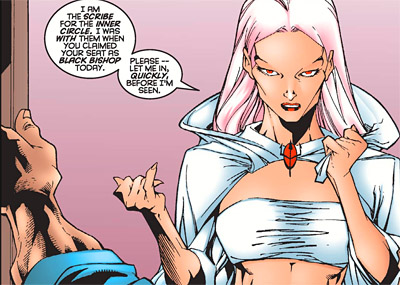 Shinobi Shaw of the Manhattan Hellfire Club received rumors of Mountjoy’s infiltration and the possible overreach of the London branch. He contacted Brian Braddock of Excalibur and Hellfire ancestry to investigate the Club. Braddock claimed his father’s position as Black Bishop to get closer to the Inner Circle and try to determine which of them was possessed by Mountjoy. As Scribe, Mountjoy met with Brian privately to express “concerns” over the Inner Circle’s plans and subtly hint at the Red King’s changes in behavior to divert Braddock’s suspicions. When the demon slipped its reins and unleashed hellfire chaos in London, the Club’s plans fell apa

rt. The Black Queen and Scribe/Mountjoy fought with Brian in his Captain Britain identity. Mountjoy tried to cut and run, but was captured by the British super-hero. [Excalibur (1st series) #96-100]

Still bonded with Scribe, Mountjoy was freed from prison by Sebastian Shaw, who was in the process of rebuilding the Manhattan Inner Circle after ousting his son, Shinobi. Forced into an alliance of necessity with his former rival, Selene the Black Queen, Sebastian wanted to prevent her from stacking the Inner Circle with her loyalists. Selene’s nominated Black Rook, Madelyne Pryor, was therefore put to a test by Shaw. She was pitted against Scribe as the Red Rook in single combat to see who would claim a position in the new Club. Shaw hoped Scribe’s natural phasing abilities, combined with Mountjoy’s hidden presence, would outmatch Pryor. Instead, Madelyne detected Mountjoy’s mind and proved strong enough to reach into Scribe and forcibly extract the time-traveler from within his host. Mountjoy and Scribe were cast aside, and the Black Rook claimed her spot in the Inner Circle. [X-Man #23]