• Substantial psionic power over reality, manifesting itself as active
telepathy, telekinesis, molecular construction and manipulation, energy absorption and redistribution, awareness of the future including combat precognition to predict and avoid opponents in real time, time travel, and so on 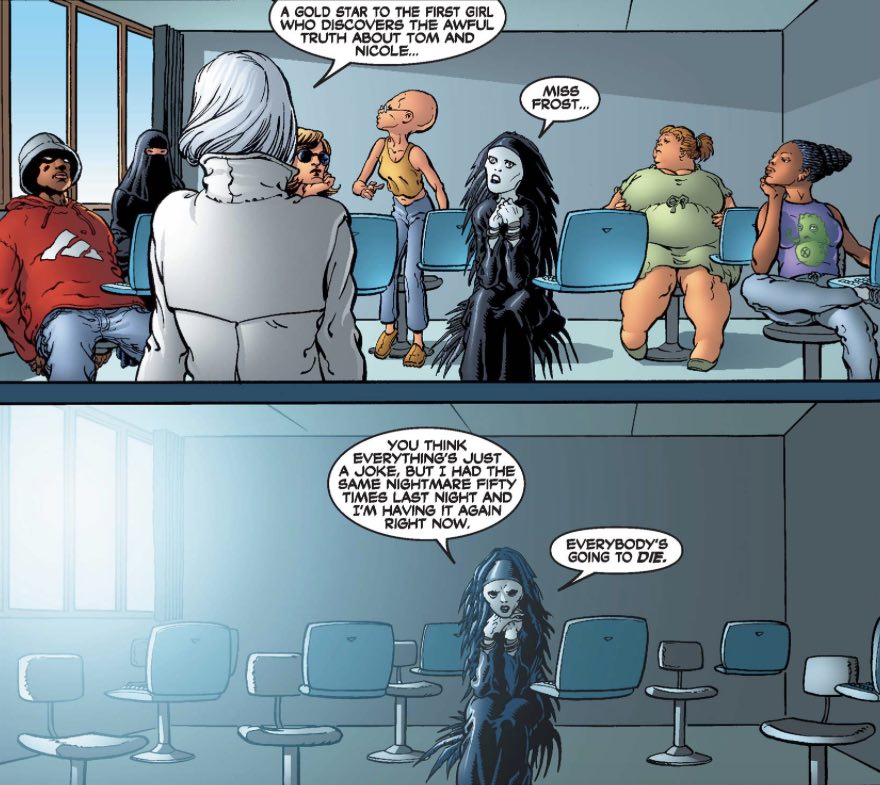 Ellie Phimister was a mutant teenager living on Genosha during the time it was under Magneto’s rule. It can be assumed that Ellie wasn’t born on the island nation but rather relocated there, heeding Magneto’s promise of a better life for mutantkind. Adopting the brazen codename Negasonic Teenage Warhead, Ellie became one of Emma Frost’s students and began to learn how to use her extensive psychic powers which usually manifested in the form of precognitive nightmares. One of these nightmares was the destruction of Genosha and the death of everyone who lived there. And sure enough, during one of Emma Frost’s telepathy classes, a horde of Sentinels under the command of Cassandra Nova laid waste to the island, killing the 16 million mutants that lived there, including Ellie. Thanks to her diamond form, Emma Frost was one of the few survivors of the brutal attack and was found by her rescuers still clutching Ellie’s corpse, 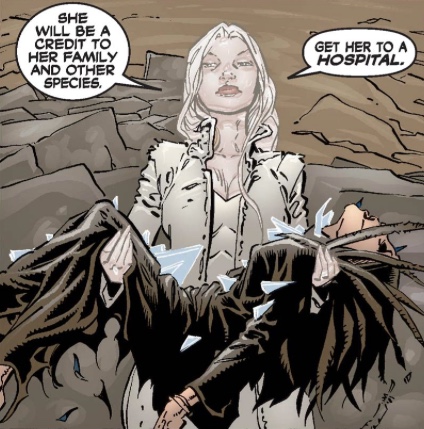 Emma understandably suffered from a severe case of survivor’s guilt and Ellie was the face of it, appearing in Emma’s mind whenever she thought back on the day of Genosha fell. [Dark Reign: The Cabal #1] When Cassandra Nova implanted herself in Emma’s mind and preyed on this guilt to manipulate her, she created a psychic construct of Negasonic Teenage Warhead. This version of Ellie was pure evil and used her powers to assist Emma in attacking the X-Men as a member of a new Hellfire Club. Upon realizing that Ellie was little more than an illusion, Cyclops shot her and she disappeared. [Astonishing X-Men (3rd series) #13-18] 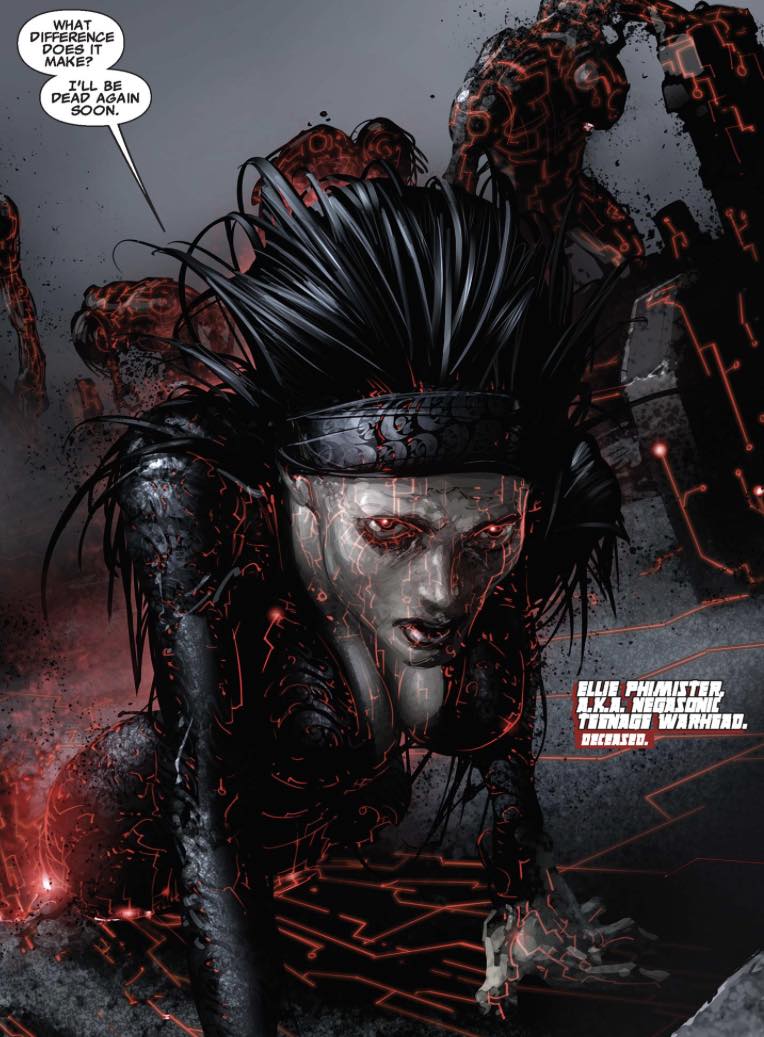 Ellie would eventually be truly resurrected when the ancient mutant Selene arrived on Genosha and used the techno-organic virus to reanimate the millions that died there. Selene sensed Negasonic’s precognitive abilities and kept her close by, forcing her to report on the progress of her Inner Circle members as they prepared for a ritual that would ascend the mutant sorceress to godhood. When the time was right, Ellie and the other newly-resurrected mutants were sacrificed. As Selene absorbed their souls, she became a goddess but was quickly defeated by X-Force. Afterwards, Ellie and the other Genoshan mutants presumably returned to the afterlife. [X-Force (3rd series) #22-25, Necrosha crossover]

Some time later, Ellie resurfaced living in Albuquerque, New Mexico. Now exhibiting reality warping powers, Ellie was able to create a new life for herself that resembled that of a normal suburban American teenager. This fantasy was eventually shattered when Deadpool and his crew of mercenaries known as the Mercs for Money were hired by Umbral Dynamics to bring her in.

Unsure of how dangerous Ellie was, the Mercs went in to apprehend her with guns blazing. With her precognitive powers, Ellie easily evaded them until she got to Deadpool. Under the impression that Umbral simply wanted to protect Ellie, Wade attempted to reason with her. When her powers showed 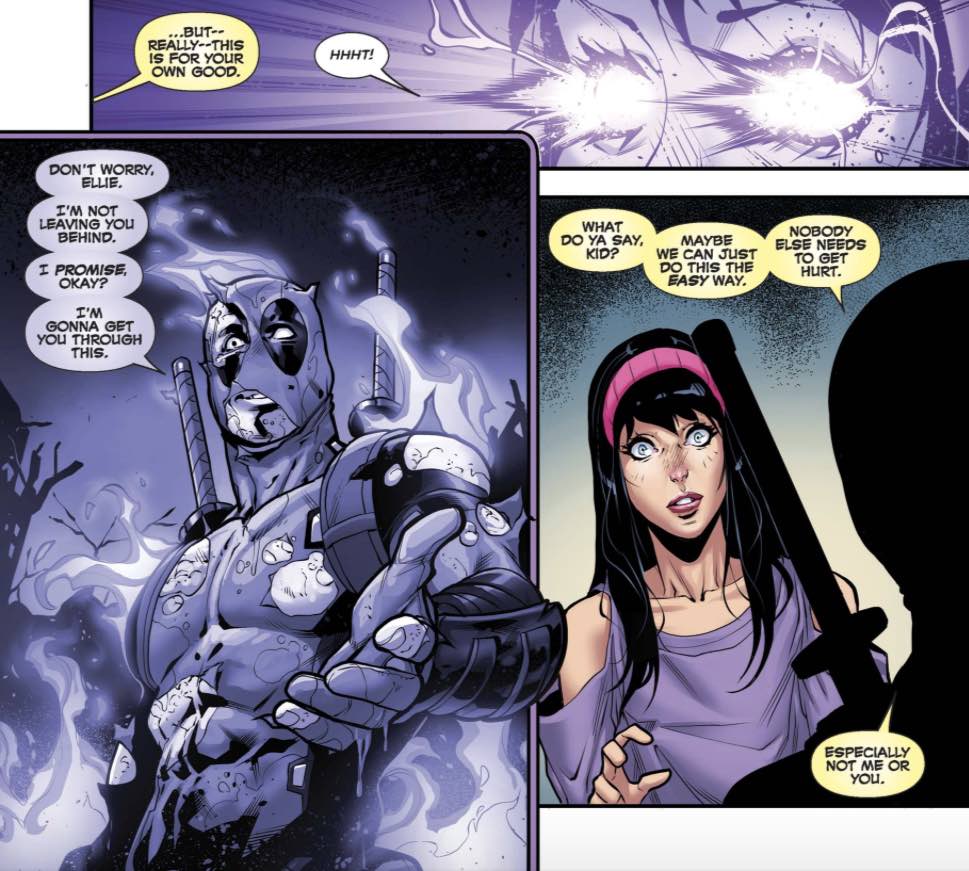 her that Deadpool would eventually be the one to save her from disaster, Ellie placed her trust in him and surrendered. As the Mercs left to hand Ellie over to Umbral, they questioned what the girl’s parents would think, not knowing that Ellie’s fabricated home and lifestyle had already vanished behind them. [Deadpool & the Mercs for Money (2nd series) #1]

[Note: The circumstances behind Ellie’s latest resurrection have yet to be revealed. Even Ellie herself seems unaware of how she returned to life. Given the extent of her reality warping powers, it’s possible that she resurrected herself or used her abilities to remain alive after Selene was defeated. In reality, the character was brought back due to the popularity of her cinematic counterpart in the Deadpool film, whose differing appearance and personality Ellie would go on to adopt.]

Trusting Umbral Dynamics turned out to be a severe lapse in judgement on Deadpool’s part. Run by Caroline le Fey, the deranged lovechild of Doctor Doom and Morgan le Fay, the shadowy organization was collecting individuals who were potential sources of radiation. They hit the jackpot with Negasonic and after cruelly experimenting on her, they were able to use her powers to bring the radioactive being known as the Presence back to life. 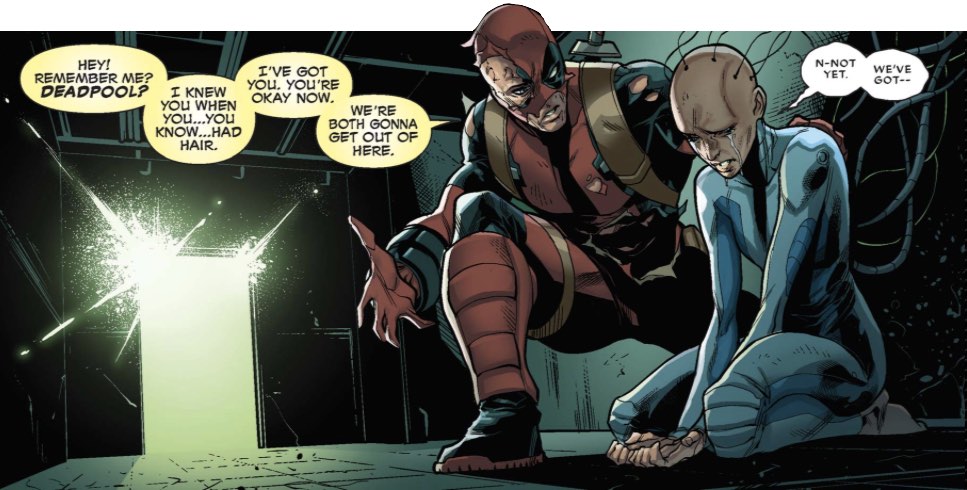 Learning of Umbral’s true nature, Deadpool attempted to rescue Ellie from their headquarters in Bagalia. Unfortunately given his poor leadership and terrible choice in clients, Deadpool’s Mercs for Money had abandoned him and while was able to free Ellie from her containment unit, he alone was no match for the combined might of le Fay’s hired muscle and the Presence. The tide of the battle turned when Domino showed up, leading a brand-new team of mercenaries. Ellie herself put an end to the threat of the Presence when she absorbed back all the energy that was used to restore him. Following le Fay’s defeat, Ellie forgave Wade and decided to join him and the new Mercs for Money. [Deadpool & the Mercs for Money (2nd series) #4-5]

Now living at the Merc’s headquarters in New York, Ellie grew close to Deadpool and was grateful to him for giving her a fresh start. Wade was frustrated that Domino had taken over his team but Ellie assured him that he was still team leader in her eyes. She offered to help Wade take control back and so on their next mission, Negasonic used her powers to transform everyone’s outfits into matching Deadpool costumes. Domino was annoyed and also alarmed at this impressive display of power. Dom wasn’t the only one concerned with Negasonic’s abilities; S.H.I.E.L.D. had sent Hit-Monkey to join the Mercs for Money solely to monitor her. [Deadpool & the Mercs for Money (2nd series) #6]

When it became clear that the Inhuman’s Terrigen Cloud would eventually kill all of mutantkind, the X-Men and the Mercs prepared to go to war with the Inhumans to destroy it. Hoping to put an end to the conflict, Ellie considered using her powers to make the Terrigan Cloud harmless. She was 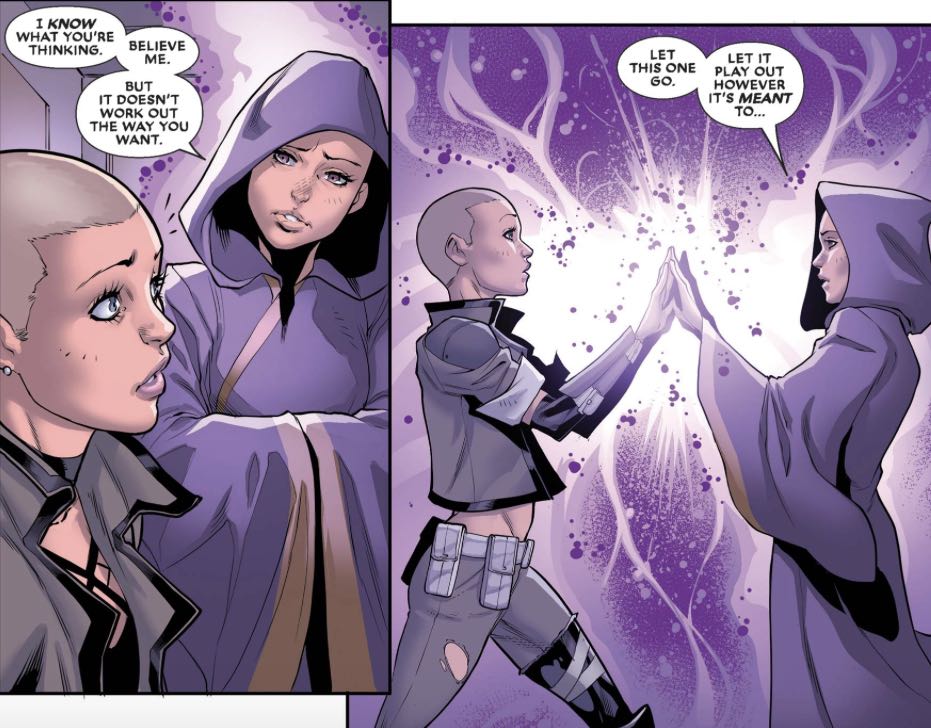 stopped by a future version of herself who travelled to the past to warn her that altering the cloud would only escalate the war and cost the lives of many, including Deadpool’s daughter, Eleanor. This glimpse into the future convinced Ellie to stay out of the Inhumans conflict and to begin keeping a watchful eye over young Eleanor. [Deadpool & the Mercs for Money (2nd series) #7-8]

The Mercs for Money eventually went their separate ways but Negasonic remained a loyal friend to Deadpool, assisting him against his ex-wife Shiklah and joining S.H.I.E.L.D.’s Deadpool Task Force when a massive bounty was put on his head. When Wade opened up a new mercenary-for-hire shop in a small NYC suburb, Ellie came aboard as his secretary, a job she handles with excessive apathy and her trademark cynicism. [Deadpool (5th Series) #1-2] 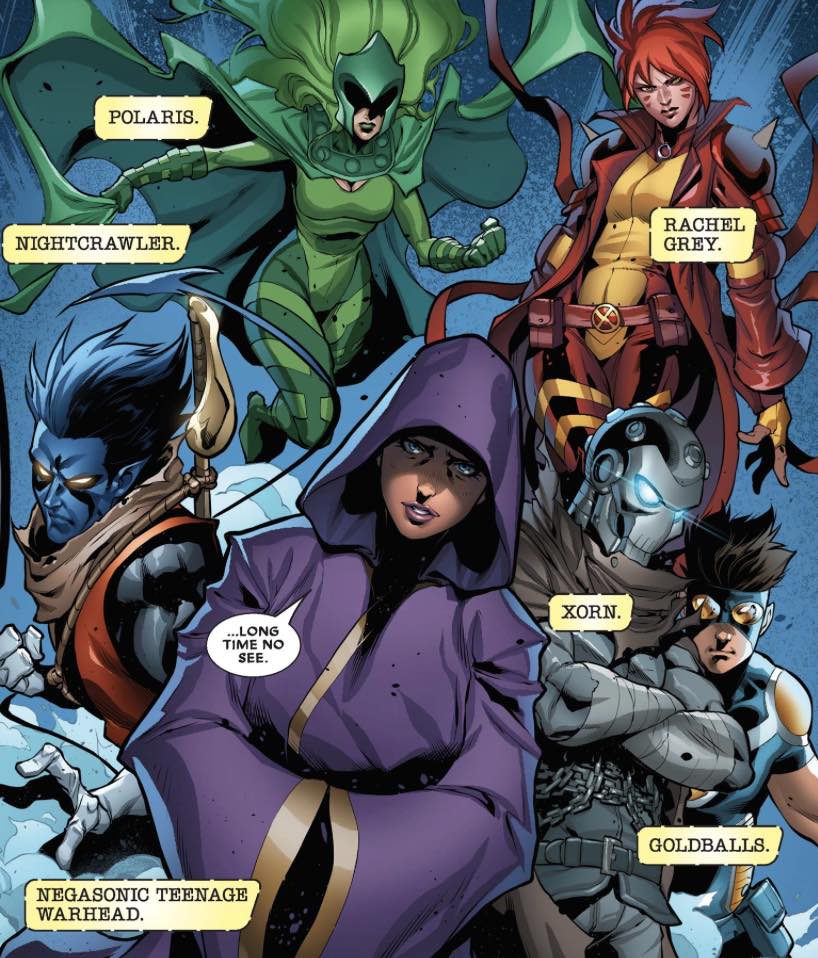 In the alternate future depicted in Deadpool & the Mercs for Money (2nd series) #7-8 where Ellie did render the Terrigen Cloud harmless, the war between the Inhumans and X-Men escalated and within five years, many lives had been caught in the crossfire including Deadpool’s daughter. Protected by a group of X-Men, Negasonic went into hiding. When Deadpool and the Mercs set out to find her, they accidentally led the Inhumans to her location and a brutal battle was waged. Deadpool died protecting Ellie and with his last breath, he convinced her to travel back in time to change how things turned out which she did, erasing this particular timeline.