Part One: Project Wideawake & Days of Future Past

For years, the human populace of the world had worried about the perceived rising threat of mutants. They feared that mutants, with their extraordinary powers, would attempt to use their abilities to conquer and rule over those without. As it happens, though while bigoted, those who felt this way were not without reason.

For some time, the elite social club of billionaires in New York called the Hellfire Club had held a secret. Its ruling “Inner Circle” of the club, the crème de la crème of the wealthy, 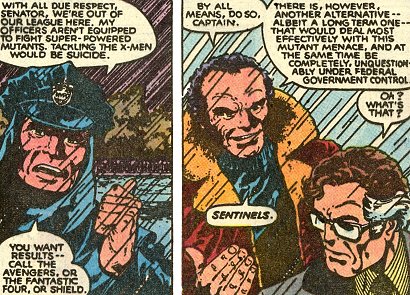 was in fact a group of mutants who plotted to use their abilities to gain greater power – with their ultimate goal being global domination. This Inner Circle, dubbed the Lords Cardinal by their founder, industrial magnate Sebastian Shaw, attempted to expand that power base by corrupting one of the X-Men, the powerful Phoenix, through a series of illusions and mental manipulation. However, after the plan went awry, Shaw realized that he had underestimated the X-Men and looked for other options. To his friend, the influential Senator Robert Kelly, Sebastian Shaw – seemingly an upstanding, very human constituent citizen – suggested that a long-term solution to the mutant menace might be the Sentinels. [X-Men (1st series) #135]

Already known for his anti-mutant policy stance, Senator Kelly agreed and the issue made its way through Kelly’s Senatorial committee and eventually found itself on the desk of the president of the United States. Though troubled by some of its draconian and perhaps illegal parts, the president agreed due to concerns of national security and so the covert Project: Wideawake was conceived. To the head of the secret organization was appointed Peter Henry Gyrich, who was directed to work with Shaw Industries to design and construct a new series of Sentinels. [Uncanny X-Men #142]

In the Days of Future Past, a timeline which diverged from the main reality around this time period, Project: Wideawake eventually received full public recognition and more importantly public funding to protect humanity against the mutant threat. However, this perceived deed of good intentions – the safeguarding of humanity against a threat – took little more than a decade to unravel. Like the first generation of Sentinels constructed years before by their inventor, Bolivar Trask, these Sentinels eventually became intelligent enough to decide on their own that they no longer had to follow their human creators to fulfill their primary directive, the extermination of mutants. As such, the Sentinels followed their own Master Mold unit and proceeded to conquer the world, destroying mutants wherever the found them. Within fifteen years, concentration camps dotted what remained of the country and human civilization lay in ruins. [Uncanny X-Men #141-142]

By this time, the original Sentinel models which Bolivar Trask had designed had given way to Omega Sentinels, which were capable of fantastic adaptation against mutant foes. If an Omega Sentinel was defeated by a mutant, it mattered not. Another would be manufactured in its place – and the new unit would be incapable of being defeated in the same way again. Still, this adaptability was not good enough and the Master Mold proceeded to design a new model capable of instantaneous adaption. This model would be given the codex of “Project Nimrod.”

Learning about this new threat to the survival of their species, members of the mutant underground – Kate Pryde and Rachel Summers – infiltrated the Project Nimrod facility to plant a nuclear bomb. However, unknown to Rachel, the entire mission was actually a smokescreen devised by Kate and the enigmatic Phoenix Force to cover Rachel’s escape back into the past.

The day before, Rachel and Kate had conducted a daring plot to use Rachel’s powers to switch the minds of Kate with her teenage self. Back in the past, Kate would use her knowledge of historical events to alter time. Unfortunately, while Kate’s plan succeeded in allowing the X-Men to act in time to prevent the assassination of a key political figure, Kate found reality unaltered when she returned to her future. Another subsequent excursion through time revealed to Rachel that she had actually sent Kate cross-time, as well as backwards – meaning that she had been sent to an alternate past, rather than their own. As Rachel’s consciousness returned, 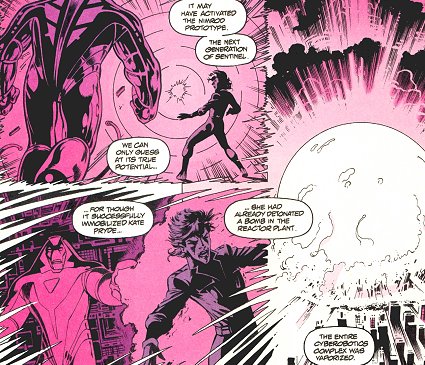 Unfortunately for Kate, the energy pulse of the temporal jaunt also activated the prototype Nimrod Sentinel, which promptly investigated the intrusion. Arriving on the scene a moment after Rachel’s transport, the unit immediately immobilized Kate, who shifted instinctively to a phased form. It was this phased form that allowed Kate to survive the detonation of the nuclear bomb she had activated just prior to the arrival of Nimrod. Afterwards, those who worked in the Sentinel central complex would review the recorded security footage and assume that the Nimrod unit had been vaporized, along with the rest of the cyberobotics complex. [Excalibur (1st series) #66]