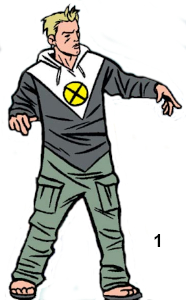 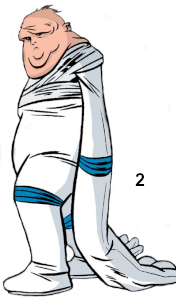 1) Phat's first costume was pretty casual, and had him wearing a long-sleeved gray and white hoodie. The white hood would sometimes be worn up and the triangular design on the chest framed a yellow and black X symbol. His pants were baggy green jeans and his footwear was just thong sandals. [X-Force (1st series) #117]

2) When X-Force went to space, all team members wore a white spacesuit with blue rubber on the joints and a removable clear domed helmet. Phat's had the added benefit of being able to expand to accomadate his powers. [X-Force (1st series) #125] 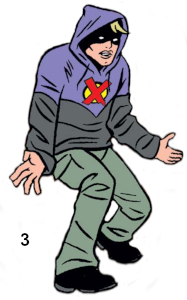 3) Phat's costume went through an update when the team rebranded as X-Statix. Still wearing a gray long-sleeved hoodie, the white sections were now purple and came halfway down the arms, as well as the chest. The new X-Statix symbol of a stylized red X within a yellow circle adorned the center of the hoodie. His green jeans appeared slightly less baggy and he decided to ditch the sandals for more practical black boots. [X-Statix #1]

4) The final redsign of Phat's costume was a temporary one. When Henrietta Hunter became the new leader of X-Statix, she used her stylish skills to make Phat a tight, sleeveless, solid yellow shirt. For pants he wore purple skinny jeans with yellow diamonds running along the sides. Finally, he wore blue shoes and sported a single earring on his right lobe. [X-Statix #16]