Cult of the Living Monolith
(Children of the Pharaoh)

• Absorb cosmic energy from the
environment or directly from Havok, metabolizing
it into an increase in stature and musculature, boosting her strength and resistance to physical injury, and fire her storages as cosmic plasma bolts

Leila O’Toole was born in Dublin, Ireland, daughter of an Irish father and a mother who was most likely an immigrant from Egypt. The reasons Leila’s mother moved away from Egypt are unknown, however it could very well relate to her brother, Dr. Ahmet Abdol, who was Leila’s uncle. Given that Leila later claime 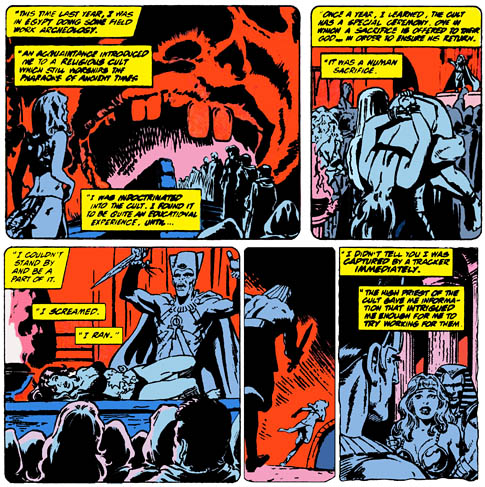 d to have had no knowledge of her uncle, who became a cult leader, it could be that Leila’s mother fled from her family to another country and tried her best to shield her husband and daughter from them. Leila’s uncle, Dr. Ahmet Abdol, had been an archaeologist and, more specifically, an Egyptologist. Adbol eventually fell in with the Cult of the Living Pharaoh and became its leader, intending to use his position as leader and his mutant ability to absorb certain cosmic energies to achieve greater heights of power. Unfortunately for him, Abdol, calling himself the Living Pharaoh, held a symbiotic relationship with a mutant who would eventually become the X-Man called Havok. Although the two absorbed the same cosmic energies, these energies defaulted to Havok first, meaning that while Havok was healthy or alive, the energies did not filter to the Living Pharaoh. Even though he succeeded briefly in obtaining primacy over Havok in receipt of these energies from the X-Man, becoming the “Living Monolith” in the process, Adbol lost his bid for power and seemingly died.

Although apparently completely unaware of her uncle, young Leila O’Toole went down the path of becoming an archeologist and Egyptologist, just as he had. Given the improbably nature of this, it is possible Leila had been subtly pushed down this path by the Cult of the Living Pharaoh, which had continued on despite their master’s death. To that end, when she traveled to Egypt to complete her field work for her studies, Leila was approached by the cult, who intended to recruit her to take her uncle’s place. At first Leila was intrigued. However, her curiosity quickly turned to horror when she witnessed the worshipers conducting a human sacrifice. Telling this story later, Leila stated that, upon seeing this, she fled for her life, only to be caught by the cultists, who then won her over with their ideas. Given the unlikely nature of such a quick, mental turnaround, it’s possible Leila was brainwashed in some way, or perhaps when she was relating this story later she was simply lying about some aspect of the whole story.

Whatever the reason, Leila was not the only relative of Abdol’s in the cult. Several other relatives, “descendants of the Pharaoh,” were among their number. It was the hope of the cult that one of them, Leila included, would prove to possess the same powers as their fallen leader. Indeed, these “Trackers” were close enough to the Living Pharaoh (and thus to Havok) that they possessed a psychic connection to the Havok and tracked him to the Australian Outback, where the X-Men were living in secret, having recently faked their deaths. The plan was based around Leila acting as a beautiful “damsel,” suffering from car trouble. When Havok pulled to the side of the road to offer his aid, he was attacked from the skies by mercenaries in aircraft. It was during the battle that Leila realized she could feel Havok’s energies flowing into her, meaning that while the X-Man had siphoned energies from her uncle, the process worked the opposite way for her. Havok’s use of his powers allowed her to channel them.

Recovering from the effects, Leila changed her plan on the fly and helped Havok escape a trap, giving him the opportunity to gain the upper hand and forcing his attackers to retreat. To maintain her cover of being an innocent, Leila explained that the attackers had actually been after her. She had been a member of a cult before but had fled upon discovering their human sacrifice rituals and had been on the run for over a year. Although he clearly found it an incredibly coincidence that this random acquaintance also had a history with an Egyptian-themed cult, Havok was nevertheless enamored enough by Leila's appearance that he ignored the obvious.

Although the two had a few more altercations with mercenaries along the way, they made it back to town. Rather than split up, however, Leila suggested that they travel together and Havok accepted. The two had a whirlwind romance over the following weeks and journeyed across Australia, taking in the sights. Continued proximity to Havok was making Leila feel euphoric, as she was gradually feeding off his cosmic energies. Havok was unaware of the symbiotic relationship between the two as, unlike his and the Living Pharaoh’s connection, there were no negative effects for either party.

While attending a dinner in an upmarket restaurant, Leila asked Havok if he was love with her. Leila confessed to the Havok that she was falling in love with him but then added that it was 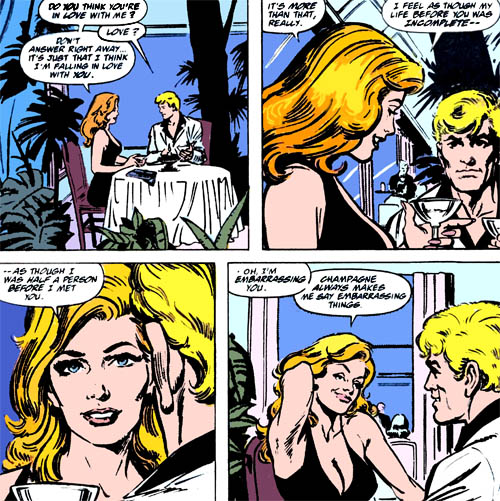 more than that. She said she felt incomplete before their meeting; that she was merely half a person before they met. When she wasn't getting the answer she wanted, she excused herself, blaming her words on the champagne, though she did ask Havok to think over what she said. While heading to the bathroom, Leila was captured by the mercenaries Havok had fought earlier and delivered to one of the cult's Trackers. Hearing her screams, Havok attempted to help her but he was hit by a grenade, which brought down the whole restaurant. Believing her love dead, Leila burst into tears as she was taken back to Egypt, remarking that she was just “half a person.”

Havok, however, had actually survived and pursued Leila to Cairo, eventually finding the cult’s hideout. Once again, Leila acted the hostage of the cult as its leader, holding her at knifepoint, ordered Havok to battle the cult’s Trackers in ritual combat. Seeing no choice Havok complied, unaware that Leila would in fact be among the Trackers he was face in the ring. One by one, the Trackers fell before Havok, who grew weaker with every one he felled. When only one was left, Havok used the last of his strength to try to bring it down. At first, it seemed that this one too would fall before him but, when the Tracker’s armor cracked open, a woman emerged, declaring herself, “Plasma, the rightful descendant of the Living Pharaoh.” Immediately, the rest of the cultists dropped to their knees, proclaiming her their queen.

Although this new “Plasma” bore the same strawberry-blonde hair as Leila, Havok still did not recognize her, possibly due to a combination of Plasma’s new armor, her physical size being taller and more muscular than Leila, or simple shock. Having exhausted his store mutant energies during the battle, Havok was literally powerless. Nevertheless, Havok managed to escape and the next day returned with his teammate Wolverine, fully intending to rescue Leila O’Toole. Returning to the cult’s hidden base, the two X-Men fought past the first wave of opposition. However, when they reached Plasma, the cultists’ queen quickly incapacitated Wolverine with her energy blasts. Plasma then goaded Havok to blast her with more energy, even as he demanded to see Leila. Finally deciding to put him out of his misery, Plasma removed her helmet, revealing to the X-Man that she was in fact Leila. 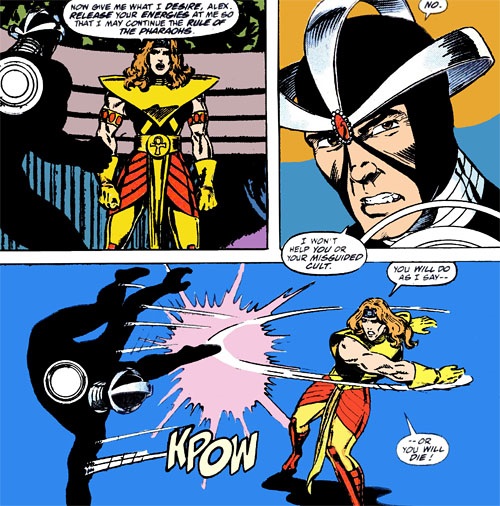 Seeing Havok now defeated emotionally, if not physically, Plasma began to tell Havok her story. She maintained that she hadn't entirely lied to him and that she was indeed inducted to the cult innocently. She had been sent to help capture him but, when she realized that she absorbed all the cosmic rays that he released, she realized that it was she who was the true heir to the Living Pharaoh. Further, rather than incapacitate Havok to gain her “inheritance,” she needed him active and helped him escape capture. When she did so, the cult believed she had betrayed them and later captured her. The Trackers whom Havok had fought earlier were all her extended family and the cult had believed that one of them would be their chosen one, the new Living Pharaoh. Now with his power, Plasma would continue the rule of Egypt’s rulers of old.

Seeing her mania, Havok refused to help her, raising her anger more. She would not be denied by him, she told him, even if she loved him. As the two fought, however, Havok refused to use his powers and thereby increase Plasma’s. Increasing in her rage, Leila blasted her own followers and then began to fire at the temple itself. It was not long before she did enough damage to the underground temple to trigger a cave in. As the building collapsed, Havok punched Leila, seemingly knocking her unconscious, and she was overtaken by the debris. [Marvel Comics Presents (1st series) #24-31]

Despite her apparent demise, Leila had in fact survived, though with the destruction of the temple she had lost all of worshipers. Still scheming for power, she became an ally of the “Knights of the Moon,” worshipers of the Egyptian deity Khonshu. In this partnership, she took part in the terrorist attack on Grand Central Station, wearing a fetching new costume. The station was being used as a venue for a charity event and the attack was intended to be used for financial gain. Plasma's blood-lust changed things, however. She wanted to kill one of the hostages to show how serious she was and to force the authorities not to enter the building. Taking a man who had been injured in the initial assault, Plasma incinerated his head while standing in front of the window and threw his body at the NYPD. Just at this time, Ghost Rider arrived and killed most of Knights of the Moon's men.

Plasma was not concerned and blasted Ghost Rider's body apart. Not realizing he was a supernatural entity and unable to be killed this way, Plasma was quite pleased with herself and told her remaining allies it was time to flee. Along with the remaining men, Plasma stole to the underground, planning their escape. Unbeknownst to the leadership of the Knights of the Moon, Plasma was planning to double cross them all along and had placed explosives throughout the station. 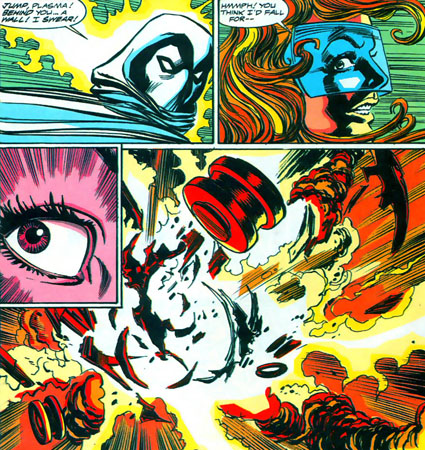 Fleeing on an underground train, she was waiting until she was a safe distance away to detonate the explosives with the hostages and her former allies still in the building. It was at this point that she realized that Ghost Rider, somehow, was still in pursuit. After destroying his body yet again, Plasma was then engaged by the anti-hero, Moon Knight, who tussled with her. Despite his prowess, he was no match for Plasma’s enhanced strength. In true villainous fashion, Plasma revealed her plan to unite all the eastern cults under her, starting with the cult of Khonshu, which was why she planning on killing their leadership at the end of this mission. As she battled both heroes (including a once-again animated Ghost Rider), Plasma started to race towards a dead end. Moon Knight warned her to jump but she was too arrogant to listen and failed to see her own demise coming as the train she was on collided with a dead end, killing her. [Marc Spector: Moon Knight #25]

Leila, as with so many mutants, may have been resurrected during the Krakoan age. Should this have occurred it, remains to be seen what kind of welcome her former paramour Havok may have for her.