• Energy siphon able to feed off
of other bio-energy sources,
weakening the health and
super-abilities of other people
nearby and converting their
bio-energies into increased
strength, endurance, resistance
to physical injury, and
bio-plasma blasts 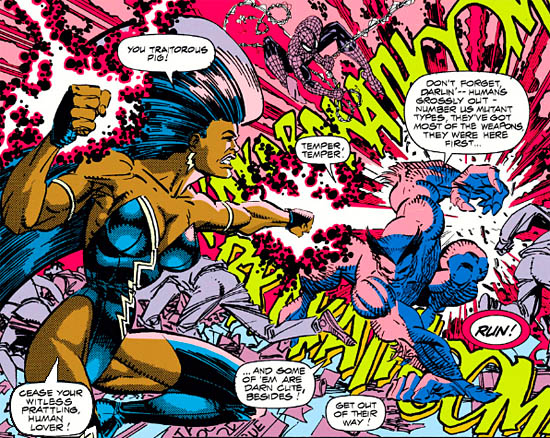 The past of the mutant terrorist Powerhouse is unknown. She made her first public appearance demonstrating her clear disdain for the Beast while he was giving a lecture at Empire State University. She declared him a traitor to their people for fraternizing with the human enemy and stated that it was time that mutants stopped being treated like slaves and should take over from their oppressors the humans. By happenstance, a mutant hater named Masterblaster had also attacked the same event. The appearance of both Powerhouse and Masterblaster (though he was a far more a minimal threat) had caused a riot. Beast tried to reason with Powerhouse, noting that even from a logistically point of view the humans simply outnumbered them, so a peaceful solution was needed. Powerhouse would not hear of it and attacked without abandon. Fortunately for Beast, his friendly neighborhood Spider-Man had a personal interest in this lecture and arrived just after the start of this scuffle. The appearance of Spider-Man turned the tide and Powerhouse was knocked through a wall. Presumably, she escaped capture. [Spider-Man (1st series) #15]

Despite her defeat by Spider-Man and Beast, Powerhouse's “activism” was far from over. The day before a debate on human/mutant relations was due to take place in the United Nations building in New York City, Powerhouse attacked, destroying everything in sight. Her actions did not go unnoticed and Wolverine of the X-Men and Warbird arrived to stop her. Powerhouse was a powerful foe and Wolverine had trouble subduing her initially, due to her energy draining powers sapping his healing factor, but he was having even further difficulties due to the presence of Warbird. At this time Carol Danvers was still in denial about her alcoholism and had shown up to the battle drunk and was therefore a liability. Powerhouse got the upper hand on her, punching Warbird and mocking her drinking problem. She stated that, if she had any more alcohol on her breath, her plasma blasts would have ignited it. 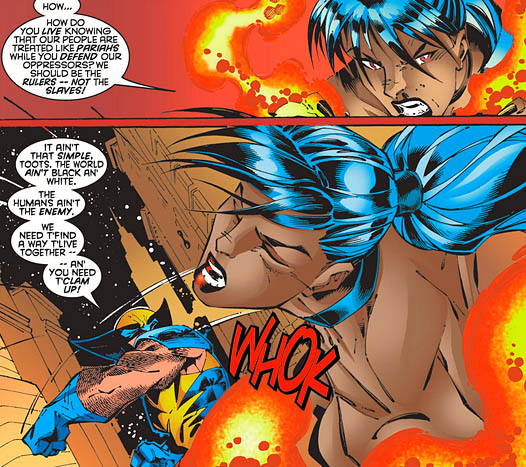 As Warbird fell, Wolverine became enraged and attacked Powerhouse in force to avenge his friend. As Wolverine started to find the advantage, Powerhouse angrily said that he just didn't get it. Mutants like them were being treated as pariahs worldwide, that he helped their oppressors and that they should be the rulers not the slaves. Wolverine decked Powerhouse, telling her that the world just wasn't that black and white and they all needed to find a way to live together. [Wolverine (2nd series) #133]

[Note: Powerhouse made frequent mention of mutants being treated like slaves. It seems likely that she was concerned about the issue in Genosha, given it was a prominent ongoing story around the time of publication. It is worth noting that, as she did not mention Genosha itself, she may have been talking about something else.] 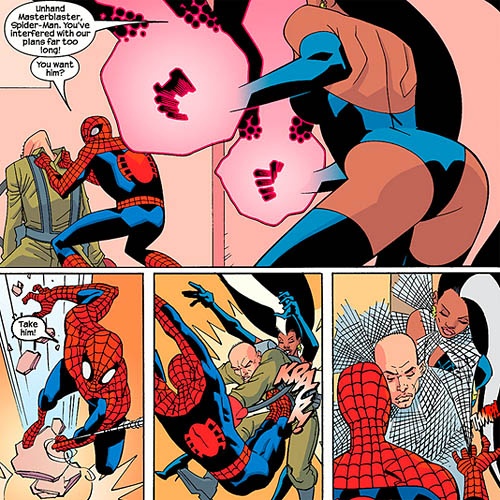 After her rumble with Wolverine and the future Captain Marvel, Powerhouse was incarcerated at the superhuman prison known as the Vault. Nevertheless, she was soon seen again free and at large. Whether she escaped or simply served her time was not explained. Inexplicably, she was now in a criminal partnership with the mutant hater Masterblaster, though she appeared to be the dominant in this new alliance. The two were taking part in a bank heist in New York City. It was far from an ideal relationship, however, as the duo bickered about how long he was taking to place explosives to open the bank's safe. Powerhouse was concerned the authorities would arrive if he didn't hurry up but, really, she should have been more concerned about superheroes, given that they were in New York.

Suddenly her old sparring partner Spider-Man appeared on the scene. The veteran hero easily outclassed Masterblaster and had the now unconscious man in a hold. Powerhouse demanded Spider-Man release her partner, suggesting that perhaps she had somewhat moved past her hatred of humans. Spider-Man flung Masterblaster at her and, with that distraction, he was able to knock her out so they could be taken away by the authorities. As Powerhouse had feared she ended up back in the Vault.

Something very curious had happened during her bank heist that she could not have predicted, however. One of the bank patrons had fallen in love with her. This unusual man pledged to himself to visit her twice weekly for however long she was imprisoned. When Powerhouse finally met this man she was mystified and wondered who the devil he was… Whether love can really blossom between Powerhouse and what is essentially her stalker is a story yet to be told. [Spider-Man Unlimited (2nd series) #4]