Inconsistent coloring,
normally yellow or orange,
sometimes with or without pupils 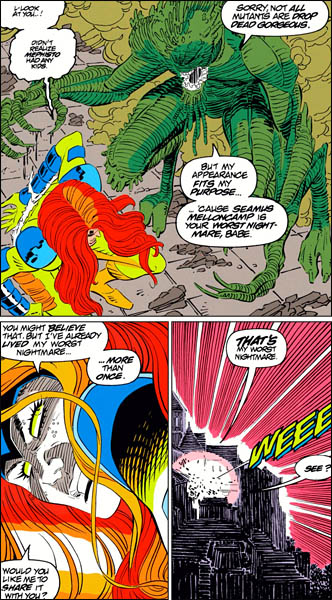 The savage reptilian mutant, Seamus Mellencamp was born in Ireland. However, excluding this, nothing else is known about his background prior to his recruitment to Fabian Cortez's second incarnation of the Acolytes. Cortez had formed this second Acolytes team following his believed murder of the master of magnetism, Magneto. He used the myth of Magneto to turn the Acolytes into a kind of messianic cult for disenfranchised mutants. As the leader of this “pseudo” faith, he had no difficulty getting angry mutants such as Seamus to join him and commit atrocities in the name of their lord, “Magneto.”

When Seamus first appeared, he was part of the group who had kidnapped and were torturing Dr. Moira MacTaggert, due to her perceived sins against their “savior” Magneto. The abduction of Moira unsurprisingly brought on the attention of the X-Men, who attacked the Acolytes' hideout in Mont St. Francis, Normandy, France. During the melee, Seamus attacked Jean Grey from behind. Upon seeing the visage of Seamus, Jean mocked his hideous appearance. Seamus retorted that not all mutants could be “drop dead gorgeous” but that his appearance fit his purpose and that he was her “worst nightmare.” Clearly underestimating the omega level mutant’s superior power, Seamus was hit with a telekinetic blast from Grey that hurled him into the Pyrenees mountain range. [Uncanny X-Men (1st series) #300] 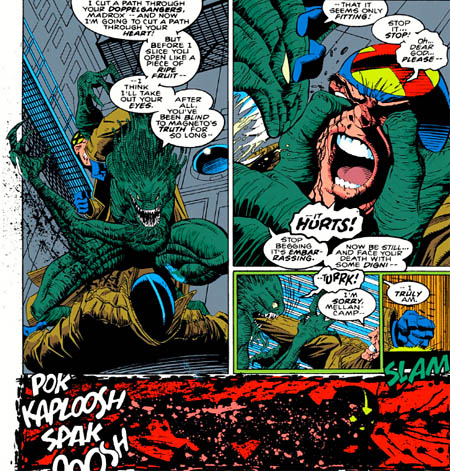 Despite this humiliating defeat, Seamus was recovered by the Acolytes and took part in their raid on Camp Hayden. Cortez had dispatched the group to assassinate Senator Robert Kelly and destroy the Sentinel processing plant hidden within the military base. Seamus and his teammates were opposed by the government-sponsored mutant team X-Factor, which interestingly included two of Magneto's old children, Quicksilver and his (at the time) alleged-later confirmed daughter Polaris. Despite the presence of Magneto's “true heirs” being among his opponents, Seamus was particularly brutal in the assault, considering the members of X-Factor heretics.

In the confrontation between the teams, he faced the Madrox, the multiple man. Madrox had the ability to create duplicates of himself and Seamus had unceremoniously slaughtered waves of his “dupes.” Grasping the original Jamie Madrox and threatening to rip him open like a piece of fruit, Madrox saw no option but to create a duplicate inside Seamus. The expansion of a “person” inside Seamus tore him apart and he appeared to die. Cortez's real goal had not been the destruction of the Sentinels nor even Kelly; it had been an attempted recruitment of Magneto's son, Quicksilver. While the battle had been playing out, Cortez efforts fell flat and he ordered the group's teleporter Amelia Voght to extract them. [X-Factor (1st series) #92]

[Note: Mellencamp clearly died when he fought Madrox. His later reappearance is baffling and was likely the result of a writer/editorial error. It was noted during the Siege of Wundagore crossover that Exodus had the power to resurrect his fallen followers. Never shown before or since, this ability was likely written in to address the inexplicable return of Mellencamp and several Acolytes.]

It would be some time before Mellencamp would again be seen. Ever the follower, he joined Exodus' incarnation of the Acolytes following a “second” death of Magneto. He was with the group when they usurped control of the High Evolutionary's Mount Wundagore citadel. The occupation was opposed by the efforts of the Knights of Wundagore, the Heroes for Hire and Magneto's son Quicksilver. Eventually, the Acolytes were driven out with Mellencamp facing his most humiliating defeat in combat yet at the hands of a mere human, the Iron Fist. [Heroes for Hire (1st series) #16, Quicksilver #12, Heroes for Hire/Quicksilver Annual '98]

Following the Wundagore debacle, Mellencamp was recruited into a new team of Acolytes. Unlike the prior incarnations in which he served, this one was actually led by Magneto.

Mellencamp was part of a coterie of Acolytes tasked with occupying the attention of the X-Men while Magneto prepared for his latest scheme, in which he planned to invert Earth's magnetic poles. The Acolytes hit several high-profile targets in the United States and later Canada to attract the attention of the X-Men who pursued them in their jet, the Blackbird. The chase led to the North Pole and the Blackbird was hit by a planned global EMP by Magneto. The pulse downed the X-Men’s craft, marooning them. This caused a moral debate amongst the assembled Acolytes as to whether or not they should show mercy to their adversaries. Seamus was non-nonchalant and playing cards with some of the crueler members of the Acolytes when the conversation arose and he posed to the question to the group: would the X-Men help them if the situation were reversed? Scanner and Cargill both said answered in the affirmative, citing earlier acts of heroism from the X-Man Cyclops, who had saved the women from the destruction of a prior home of the Acolytes, Avalon. Scanner, one of Seamus' gentler teammates, asked why they couldn't disagree but respect the X-Men? Seamus argued that the X-Men didn't show them respect, stating that Scanner, Cargill and others should have been offered sanctuary by the X-Men after the fall of Avalon. 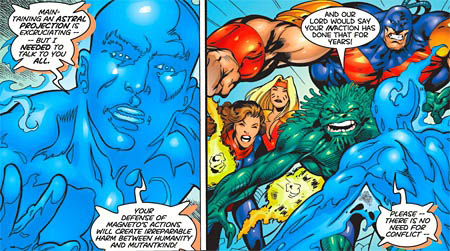 he conversation was interrupted by the appearance of Charles Xavier, who telepathically projected himself to the Acolytes ship. He pleaded with the mutants to aid them as Magneto’s actions risked causing irreparable harm to mutant-humans relations. Seamus angrily retorted that Magneto would argue that Xavier's inaction had been causing this damage for years. Just after Seamus' comment, Scanner used her own powers to violently expel Xavier's astral form from the ship.

Due to Magneto's actions, a nuclear warhead was detonated near the X-Men's crash site. The Acolytes' ship shields held and again the question of attempting to rescue their enemies was brought up among the group, with another member of the team, Neophyte, mentioning that the mission was to detain the X-Men not kill them. Seamus, again displaying his callousness, stated that the Acolytes had not killed the X-Men but, if they died in the explosion, this was not their fault.

During this exchange he also took a dig at “weak little” Scanner, the group's team leader for being too empathetic. Further acting out of character, Scanner agreed with Seamus and told her team that if X-Men had survived the blast it was the Acolytes responsibility to end them. In actuality, Xavier was using his telepathy to influence the minds of the Acolytes, encouraging them to behave more bloodthirsty so he could get them to attack and steal their ship. During a brief battle, Seamus fought Marrow and was subsequently defeated due to teamwork between Storm and Colossus. The X-Men ultimately stopped Magneto from inverting the magnetic poles but, in an unexpected turn of events, the United Nations granted him control of the mutant island of Genosha in an attempt to appease/occupy him going forward. [Magneto War crossover] 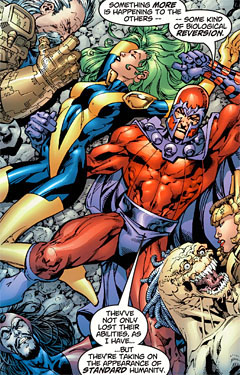 Seamus and the Acolytes accompanied Magneto to Genosha and helped him conquer/rebuild it. They had barely arrived on the island when Seamus, along with all mutants globally, were hit with by the High Evolutionary's global mutation-neutralization program by Mr. Sinister, who had assumed control of the satellite containing the device. This program caused mutants to lose their powers and “non-human” mutants such as Seamus briefly reverted to their “human” or humanoid appearances. Given Seamus seeming earlier animosity towards Jean Grey for her beauty, it can be assumed that this period was significant for him. However, his reaction to his depowering was never seen and this proved short-lived as the X-Men undid Mr. Sinister's machinations relatively quickly. [Uncanny X-Men (1st series) #379, X-Force (1st series) #94] [Note: Seamus was colored yellow incorrectly in this story.]

To the great surprise of the world, Magneto's did manage to create a sustainable society in Genosha, only for the island and its inhabitants to be virtually wiped by Sentinels on the instruction of Charles Xavier's evil twin sister, Cassandra Nova. [New X-Men (1st series) #115]

The next time Seamus was seen, he was part of a number of mutants resurrected through a combination of science and necromancy by the eternal, Selene. Selene had established her “kingdom of the dead” in the ruins of Genosha and, while she did re-animate some mutants who had died elsewhere, her actions did seem to confirm Seamus' own death in the Genoshan Sentinel attack. While not technically zombies, as they did retain their intellect, the re-animated were totally obedient to Selene. Selene used Seamus as part of a raiding party to the attack her enemies on the mutant island of Utopia. Selene tasked Seamus and some other re-animated members of the Acolytes with finding and killing Magneto. Seamus and his allies were unable to locate Magneto but did find the X-Men student Loa. They attempted to torment the girl to get her to releas 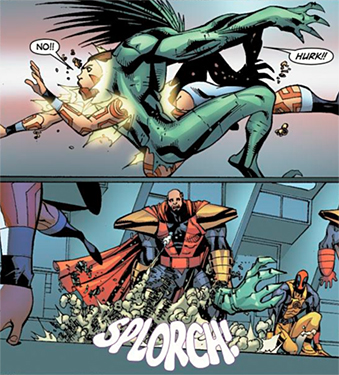 e the location of Magneto, only to run into the “merc with a mouth,” Deadpool, who was also on the island.

Despite initially having the upper hand, Deadpool was overwhelmed by the Acolytes. Loa, hoping to save her benefactor, jumped through Seamus, using her phasing ability to disrupt his re-animated body forcing it to crumble to dust. Thus ended the “third” life of one Seamus Mellencamp. [X-Necrosha #1, X-Force Annual (3rd series) #1]

Given his auspicious prior returns, it remains to be seen if Seamus will yet again walk among the children of the atom.