The origins of Slaymaster are unknown. He is a man of Muslim background with little regard for the decadent monarchy of Britain, but otherwise his place of birth and adolescence are a mystery. In his adult life, Slaymaster had become a world-class assassin, trained by many mentors in Asia and the Middle East, a master of weapons and unarmed combat. Selling his services for hire, Slaymaster adopted his costumed identity and came to Great Britain for a series of thefts and murders in the employ of shipping magnate Konrad Kharkov.

Kharkov wanted a group of high profile collectors killed and their prize possessions stolen. Slaymaster crafted a Modus Operandi as the "Gimmick Killer," assassinating each target using a play on words with their names. He had just shot Thurlow Archer with an arrow when Captain Britain responded to the scene of the murder. Slaymaster was also a master of disguise, and quickly masked himself as Archer's daughter to fool the Captain. He lured Captain Britain into a lift with a nerve gas canister before making his escape with an antique samurai sword. 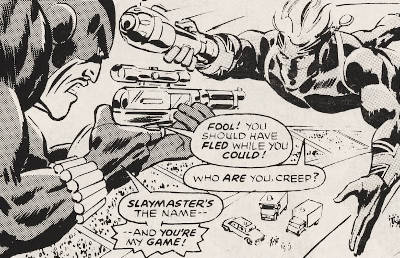 Next, Slaymaster targeted Jock Gunn, a racing enthusiast at the Formula 1 track. He swapped Gunn's starter pistol for an explosive decoy that went off when Gunn signaled the start of the race. Captain Britain arrived too late to save Gunn, but got his first face-to-face encounter with Slaymaster. The hero and villain engaged in aerial dogfighting until Slaymaster whipped up a smokescreen to escape, stealing Gunn's custom racer with a gold-plated engine as he did so. 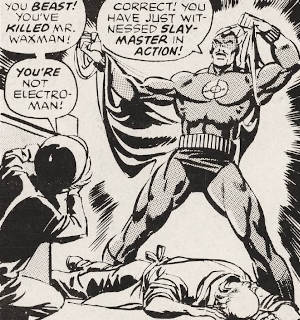 For his next target, Slaymaster went after Mr. Waxman, a dealer in rare comic books and life-sized wax figures of his favorite heroes. Disguised as a figure of "Electro-Man," Slaymaster struck Waxman dead and acquiring a mint condition copy of Spider-Man's first appearance. Captain Britain arrived on the scene, but the nephew of Inspector Dai Thomas had also been visiting Waxman. Slaymaster put the boy in danger to delay the captain from following him, and made his escape. He was similarly successful in evading the captain at the assassination of Lady Gila.

Captain Britain tracked down Slaymaster, first to his sewer hideout and later to the Mako, Kharkov 's private yacht. Kharkov intended to use the items stolen by Slaymaster to bribe a series of industrialists and financiers into tanking the British economy, out of revenge on the system that deprived him a loan when he first reached their shores as a foreigner. Kharkov tried to double- 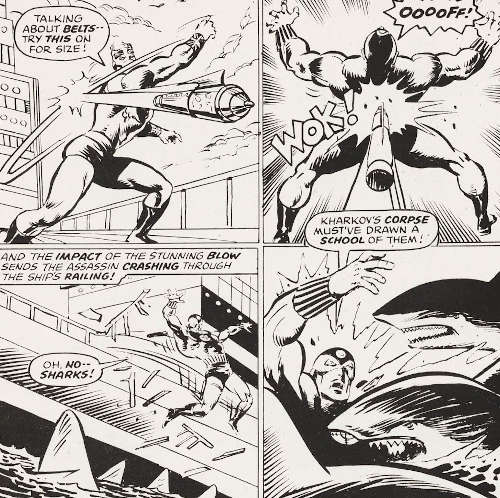 Slaymaster survived, and spent years refined his techniques. He largely discarded his gimmick weaponry in exchange for hardening his own body into a living weapon. Slaymaster was eventually hired through his associate Arcade by VIxen, the British crime lord. Vixen had her people infiltrating the British spy agency S.T.R.I.K.E., assuming control of it from within. Almost no one suspected her work, except for S.T.R.I.K.E.'s burgeoning Psi-Division of loyal psychics who perceived the change in power. Vixen wanted the Psi-Division murdered before they called attention to her infiltration, but the psychics sensed her intent and went underground. Slaymaster was hired to find them and kill them. 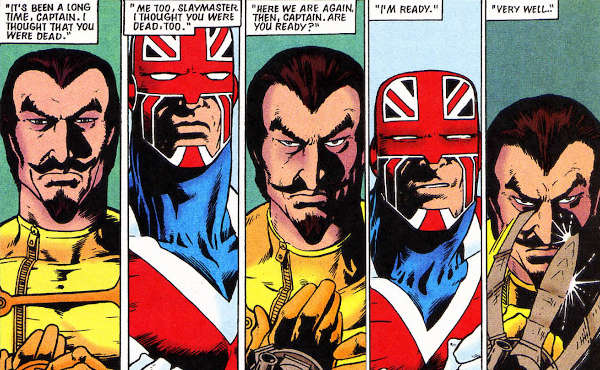 As chance would have it, one of S.T.R.I.K.E.'s agents was Elizabeth Braddock, twin sister to Captain Britain. Elizabeth reached out to her brother for protection, putting him in Slaymaster's path. The disguised assassin had already killed half the Psi-Division when Captain Britain caught up with him. Delighted at seeing his own adversary, Slaymaster discarded his disguise in order to face the captain head on. Both men had changed considerably in the years since they last fought. Captain Britain now used a personal force field to augment his natural durability. With his skill and the S.T.R.I.K.E. technology he borrowed from Vixen, however, Slaymaster was able to find weak points in the field and penetrate it. Slaymaster had disabled one of Captain Britain's arms and was moving in for the kill when Tom Lennox from S.T.R.I.K.E. distracted him with a telekinetic display. This allowed the captain to gain the upper hand, and he beat Slaymaster unconscious before the assassin could recover. [The Daredevils #3-4]

During the events of the Jaspers Warp, Slaymaster managed to escape from custody. He had plans to renew his feud with Captain Britain. [Mighty World of Marvel (2nd series) #16] Foreseeing the need for henchmen, Slaymaster stalked the Crazy Gang, criminal simpletons created by Mad Jim Jaspers and his reality warp, who lacked direction in their desire to commit crimes effectively. With some theatricality, Slaymaster lured the Crazy Gang to his hideout in the guise of the Caterpillar, fitting their motif as characters from Through the Looking Glass. The 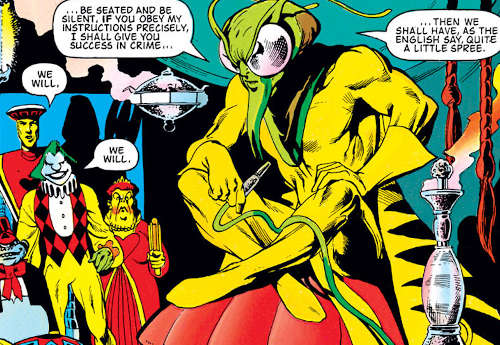 Crazy Gang were starved for leadership, and quickly agreed to follow Slaymaster's instructions. Slaymaster had them perform a series of robberies targeting symbols of British pride, hoping to draw out Captain Britain. They were quickly successful. The enraged Captain expected only the goofy Crazy Gang, and was unprepared for Slaymaster leading the Gang in a coordinated attack that quickly defeated him. [Captain Britain (2nd series) #1-2] 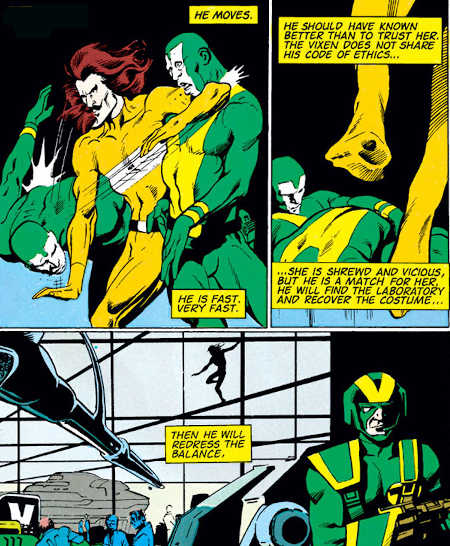 Abandoning the Crazy Gang, Slaymaster made contact with Vixen and presented to her the captured prize of Captain Britain. Slaymaster hoped to bargain with Vixen, getting her criminal scientists to analyze Captain Britain's powered uniform and replicate it for him. Vixen took custody of the captain without a deal, however, telling Slaymaster he was probably too dangerous already for her to augment him further. After Vixen's scientists took a readout of the uniform's micro-circuitry, they retired to examine the data. Slaymaster preferred a hands-on approach and donned his enemy's garb to test it for himself. He found that his strength was augmented by the uniform, but he lacked the full enhancement and other attributes Captain Britain demonstrated, such as his force field.

Slaymaster tracked down Captain Britain in Vixen's dungeons, stripped of his clothes and hung spread-eagle from a rack for Vixen's amusement. Slaymaster was sincere to apologize that so worthy an opponent was being mistreated, as that wasn't his intention in bringing the captain there. Still, he desired the secrets of Captain Britain's strength, and insisted the hero explain to him how the uniform worked. Captain Britain told Slaymaster the full effect of the uniform was 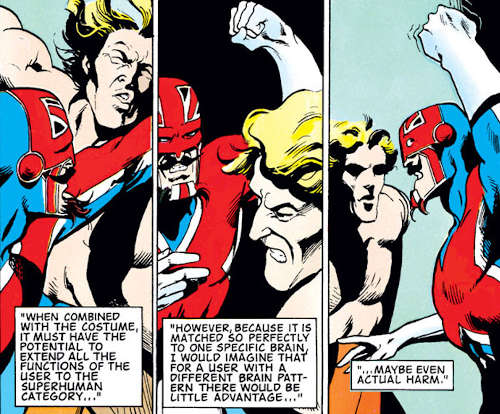 This defeat humiliated Slaymaster and Vixen enough that they put aside any previous animosity to work together. Vixen's people had maintained scans of Captain Britain's uniform from his time in her lair, and they were able to largely replicate the micro-circuitry for her benefit. Vixen provided Slaymaster with an augmentation suit of his own, this time keyed to his brain wave patterns for enhancement and control. By this time, Brian Braddock had renounced the Captain Britain identity, while his sister Elizabeth had become the new Captain Britain working with the parallel Captain U.K. and the R.C.X. Vixen kidnapped some R.C.X. personnel and issued a statement calling out the new Captain Britain to meet her or collect the bodies of her people.

Slaymaster emerged from hiding in his augmentation suit when Elizabeth arrived at the confrontation. He considered her presence as Captain Britain an insult to his skill and he brutally beat on her. The neophyte super-hero simply had no chance against the trained and augmented

assassin. As a final act of disrespect to his new opponent, Slaymaster slashed at her face and ripped out Elizabeth's eyes in a single motion. The psychic backlash from this attack was felt by Brian Braddock through the twins' unique mental link. He homed in on the sensation and discovered his sister's brutalized body.

Slaymaster dismissed his own brutality against Elizabeth, claiming she was an unworthy opponent who got what she deserved. Brian flew into a righteous rage and began attacking Slaymaster. Even absent his own uniform, Braddock's power and raw fury totally overcame any skill 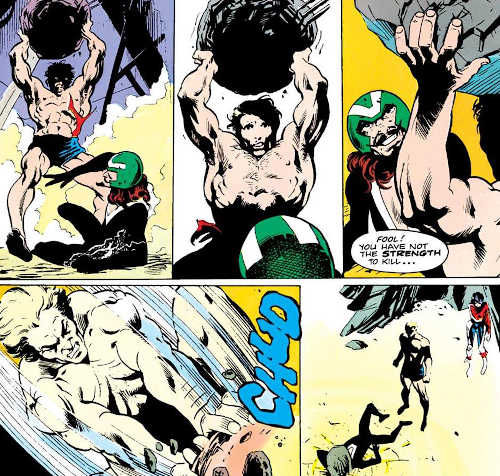 Slaymaster possessed. The assassin was beaten to the ground and Captain Britain prepared to crush his head with a boulder. When he hesitated, Slaymaster mocked the captain for not having the strength to kill him. A moment later, Slaymaster was proven wrong. Brian Braddock left the body of his foe where it fell, taking his sister to get the medical care she needed. [Captain Britain (2nd series) #13]