• Mold and extend his flesh into razor sharpened points from any area of his body, covering himself with spikes of different lengths and firing them as projectile darts or spears

Nothing about Spike’s personal history is known before his audition show-reel was presented for consideration to the X-Force senior members Orphan, U-Go Girl and Anarchist. They were seeking to replace recently-fallen teammates, and on the reel, Spike killed multiple terrorists using his organically-produced, razor-sharp, spike projectiles. Only Anarchist was unimpressed by the newcomer’s skills and convinced his teammates that Spike should not be on the team.

Later that day, X-Force held a press conference to announce that no decisions had been made on filling their two team member vacancies. Spike chose to make a grand entrance at this moment, 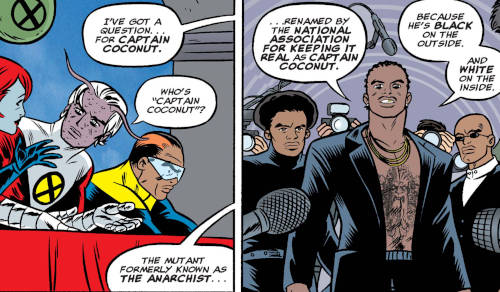 calling out Anarchist and renaming him “Captain Coconut.” Spike explained that this name fit, as Anarchist was “black” on the outside and “white” on the inside. Spike asked the question to Anarchist’s face if he was a black man who was a mutant or a mutant was who black. When U-Go Girl countered that logic with the same statement, substituting black for female, Spike discounted her opinion for being white.

Spike angrily demanded that they discuss the reasons for his being passed up for the team in front of all the cameras, rather than later as Orphan suggested. He believed that he wasn’t selected because Anarchist wanted to be the token African-American on X-Force and had used 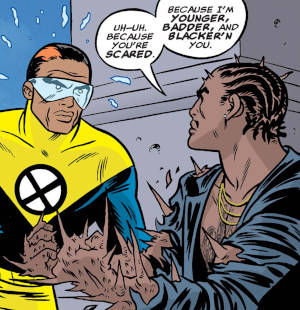 his position to keep his people down, rather than help them. Orphan attempted to diffuse the situation by claiming that the decision was made democratically by the three senior members, but the insulted Anarchist refused to back down to Spike. He angrily admitted that he had torpedoed Spike’s admission, but only because he didn’t think he could cut it. Sneering, Spike denied this reasoning, countering that the real reason was because Anarchist was scared of a younger, “badder and blacker” mutant. When the two mutants appeared ready once again to come to blows, Anarchist surprisingly walked away from the argument, which seemed to prove Spike’s point that Anarchist was the “brother” that couldn’t cut it. [X-Force (1st series) #121]

Due to the regular host’s illness, U-Go Girl was chosen to guest-host the Larry King Show on which Spike was a primary guest. Spike continued to insult Anarchist, and claimed it was probably not his fault that he came off as so white, having been brought up by white folks in a white part of 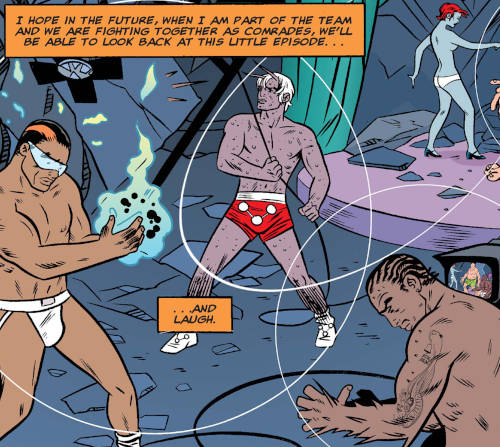 the country. He posited that Anarchist might act black, but an act was all it was. An offstage Anarchist walked onto the set to confront these accusations but, before this was resolved, all chaos broke loose. Shenanigans involving current and prospective teammates looking to steal a bit of the spotlight led to the audience being endangered and Spike worked with the team to diffuse the situation.

Spike had proven that he had what it took to be a member of the team and a press conference was soon held to announce his membership. Anarchist even had some words of encouragement for the new recruit, but Spike's response was misinterpreted by a paranoid Anarchist as a threat of death through redundancy. [X-Force (1st series) #122]

Spike went on several missions with X-Force after this. When Doop accidentally sucked the entire team into the other dimension contained in his body, the team members were confronted by some of their worst fears. In the case of Spike, this involved him cross-dressing. Spike was also on hand to stop a mutant terrorist group that attacked X-Force during a parade in their honor. During this time, Spike also started increasing friction between himself and his teammates. This included when he suggested that they replace U-Go-Girl with a teleporter that actually had their powers under control, and he then lashed out at the other members for defending her. Additionally, he seemed quite disgusted at the increasingly friendly relationship that was developing between Phat and Vivisector. [X-Force (1st series) #123-125, Brotherhood #9]

Team owner Spike Freeman told the team that their next mission was to travel to a space station to fight aliens. However, the mission proved to be divisive, as these “aliens” were the so-called “Bush-men,” escaped former death row inmates that the CIA had made into artificial mutants. The real objective was for the team to be captured by the Bush-men, so that the CIA could rescue 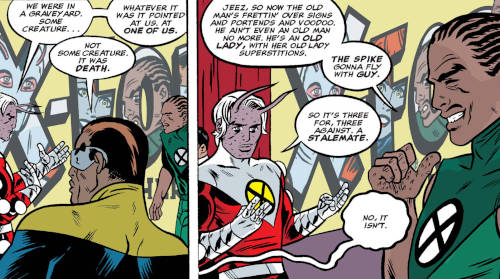 them and eliminate the dangerous situation in a PR friendly way, despite the fact that they had accidentally engineered it. Spike was not thrilled about working for the CIA and pointed out that most of the experimented-on prisoners were fellow “brothers.” Ultimately, Spike sided with Orphan and against the “superstitious Old Lady” Anarchist in the vote to take on the mission. He claimed he wasn’t worried about whupping some bogus pretend-aliens. [X-Force (1st series) #125]

On the trip up to the space station, Spike confronted teammates Vivisector and Phat for holding hands by throwing one of his spikes and injuring Vivisector. Spike exclaimed that he was sick of the two simpering at each other like “love-sick beeatches.” Orphan quickly broke up the potential fight when he pressure-point karate-chopped Spike. However, Spike did not let it drop and wanted to know if these two would be looking out for the team or their own “special feelings.” This led to a team-wide argument, in which Anarchist accused Spike of being afraid of his own “special feelings.”

Finally, the team arrived at the space station and was tricked into thinking the shape-shifting Bush-men were the hostages they were sent to save. Spike, Anarchist and new team member Dead Girl were attacked from behind by a few of these Bush-men. Spike incapacitated one of them with his spikes, but the enemies appealed to Spike to help them when they pointed out that

they should all be on the same side for being black. They claimed they were convicted by a white, racist, legal system and they agreed with Spike’s opinion that Anarchist was actually white on the inside. Spike was seemingly convinced, switched sides and did nothing when his teammates were attacked by the Bush-men. [X-Force (1st series) #126]

A bit later, a somewhat panicked Spike found himself surrounded by the Bush-men that he had chosen to join. He was questioned on his loyalty by the leader of the villains, who wanted to know why Spike would betray X-Force and join up with their doomed posse. Spike claimed that he had more in common with these brothers than those X-Force knuckleheads, but the unconvinced Bush-man commanded his associates to start ripping out Spike’s organs. Spike then quickly admitted that the whole mission was a set-up in which the only losers would be the Bush-men. 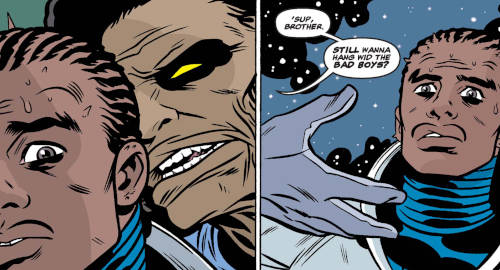 Instead, Spike thought there may be another way in which they could all win, making it so Orphan was publicly crucified and Spike could become the new X-Force leader. This convinced the Bush-man leader, but not before he tested how “bad” the newcomer really was when he whispered all of his convicted crimes into the ear of a disturbed Spike.

The rest of X-Force came across the Bush-men who were all disguised as Spike. During the fight that erupted, the true Spike emerged to save Anarchist from death. He hoped that Anarchist would accept his apology for being an @$$h*l$ and realize that it was just all talk. Shortly after the remaining Bush-men were dispatched, the CIA showed up and attempted to eliminate X-Force as potential witnesses. U-Go-Girl teleported herself, Orphan and Anarchist onto a nearby spacecraft, which left Spike and the other half of the team to quickly take out the CIA agents. The leader of the CIA was personally killed by Spike under the mistaken pretense that he was pulling out a weapon. Spike then convinced the remaining team members that the other half of the team were dead and that they should go back to Earth without them.

However, Spike was not who he appeared to be and, as the space shuttle pulled away from the

space station, the real, severely beaten Spike watched out the window and pleaded for them to come back. He told himself that he was part of X-Force too, and that he was never serious about switching sides. To an audience of none, he revealed that he was not a traitor and had tried to trick those monsters. [X-Force (1st series) #127]

On board the space shuttle, the fake Spike insisted that they choose a new leader, which led to an argument over misplaced priorities. The pilots of the shuttle saw that a space craft was returning to the station, most likely carrying their missing team members. The shuttle turned around to pick them up, much to the consternation of “Spike.” Meanwhile, the real Spike saw the returning crafts and assumed that they were coming back for him. After almost getting sucked out an airlock, he managed to survive and showed up to the reunion, much to the confusion of the team.

The fake Spike revealed himself as the leader of the Bush-men and commented that he was just starting to feel like one of the team. He rushed and then impaled a horrified Spike using a 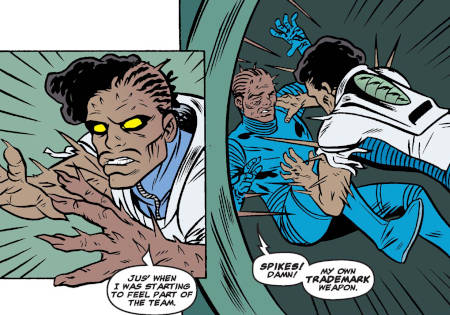 mimicked version of his own spike generation powers. Spike couldn’t quite believe he had been taken down by his own trademark weapon and compared himself to the character that got impaled by a spear in the movie Apocalypse Now. An enraged X-Force killed the Bush-man in turn, but it was too late to save their teammate Spike. [X-Force (1st series) #128]

Spike's death was reported on only briefly by the media, which claimed that he was too new and not yet famous enough to have made a significant impact. In the end, Spike ironically had a fate his rival Anarchist feared was his own, that of being killed off from the show for being a perceived redundant black cast member. [X-Force (1st series) #129]