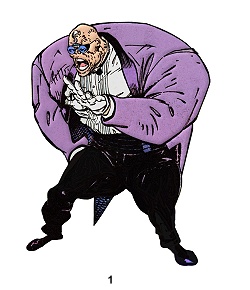 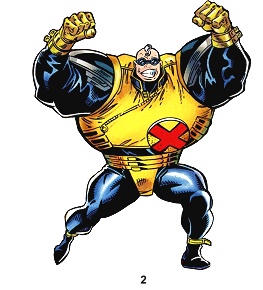 1) While working for Lila Cheney, Guido wore no costume, but instead a series of specially tailored suits for his bulk. He often sported a large bowtie, prescription visors, and jackets with tassels hanging from the back. [New Mutants (1st series) #29]

2) When he joined X-Factor, Strong Guy squeezed himself into one of the standard uniforms. It was primarily a blue bodysuit from head-to-toe, with large shoulder pads and a zippered yellow top with a large red and white 'X' symbol on his left pectoral. The costume also included yellow gloves, yellow trimmed boots, and a tight belt. [X-Factor (1st series) #72] 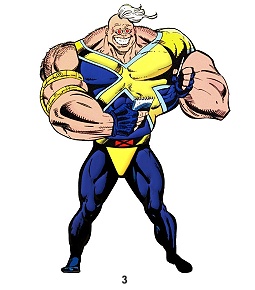 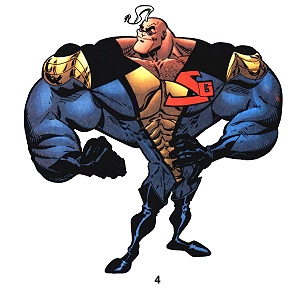 3) Later, Guido modified a new costume for himself. This one was a short-sleeved purple uniform, with an enormously large aquamarine 'X' plastered across his chest. He also wore a yellow belt, two yellow straps on his right forearm, and fingerless black gloves. Strong Guy would eventually switch to a re-colored version of this suit, with a yellow 'X' on a blue costume. [X-Factor (1st series) #88, 93]

4) During a brief return to Earth while he was touring with Lila Cheney, Strong Guy had a new costume fabricated for him in a Shi'Ar synthesizer. The suit was predominantly blue, with a yellow stripe on the center of his chest that expanded as it traveled up, until leaving his neck and a portion of his chest bare. He had black fabric on his shoulders that ended with a metallic yellow trim. He also wore dark blue gloves and knee-high boots, and had a stylized red 'SG' logo on the left side of his chest. [X-Men Unlimited (1st series) #21]

-) As part of X-Factor Investifgations, Guido mostly wore a tight sleeveless shirt, pants, boots, and fingerless gloves, all in slightly different shades of tan and brown, as well as his trademark red goggles. [X-Factor (3rd series) #1] 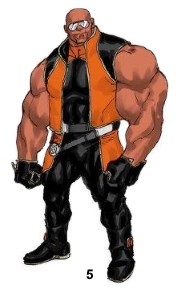 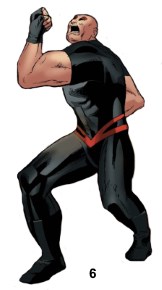 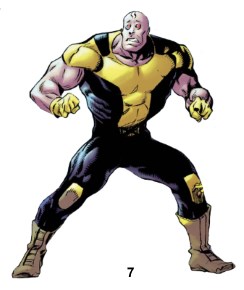 5) After moving back to New York again, the team adopted new uniforms and Strong Guy opted for a black and orange sleeveless bodysuit. He wore a sleeveless a jacket over the top in the same colors, as well as the team’s signature belt with an X buckle on it. He complimented the look with black boots, gloves and a pair of goggles that acted as his glasses. [X-Factor (1st series) #200]

6) As a servant of Mephisto, Strong Guy altered his look slightly so that he now had a black bodysuit with red stripes on the chest and waist. He kept the look simple with only black boots and gloves to go with it. [X-Factor (1st series) #250]

7) When he joined the New Mutants, he wore a black sleeveless bodysuit with a yellow Y-shape going down the chest. He wore yellow boots, glove and kneepads, as well as a large X-buckle on his belt. [New Mutants: Dead Souls #1]