•Temporal manipulation ability enables her to
slow or stop time relative to the norm, making
people and objects seemingly freeze in mid-motion,
or cause multiple targets to slow at differing rates
•Temporal psychometry allows her to visually project past events which occurred in immediate area previously, creating a freeze frame of a specific moment or replaying entire scenes

Like many mutants before her, Suzanne Chan could have been described as “just a normal teenage girl” before her mutant powers kicked in. Born to David and Emily Chan, immigrants from Hong Kong, Suzanne lived in California her whole life until the time came for her to go to college. Wanting some independence, she chose Barnard College on the east coast and convinced her parents to accompany her on a visit to show them she would be safe there. 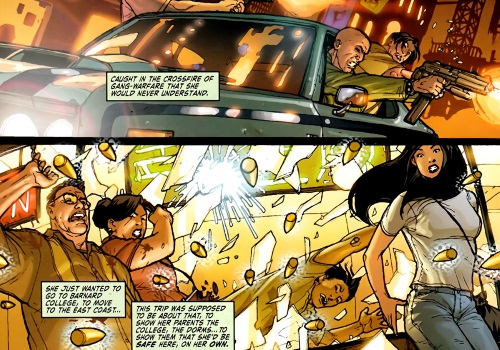 Sadly, she couldn’t have been more wrong, as one night, when they were walking through Chinatown, they became caught in the crossfire of a gang shootout. As a hail of bullets rained down on the Chans, Suzanne’s mutant power to manipulate time emerged and she froze the bullets around her. Not understanding what was going on, she instinctively moved out of the way, saving her own life. Tragically her parents were not so lucky and both were killed in the gunfire. The gang members who initiated the attack fled the scene and Suzanne was left alone and traumatized.

When the police and ambulance arrived, they were confused as to how Suzanne had survived, given the sheer number of bullets that had been sprayed across the area. She told them that she had stopped the bullets but the police just assumed she was in shock and took her to the nearby hospital for a thorough examination. The police later informed her it was unlikely that the men who shot at her would ever be caught, as the citizens of Chinatown don’t generally have a good rapport with the police and were reluctant to talk. Still stunned and now all alone, Suzanne wandered the city until she found herself back at the site of her parent’s deaths. It was here that the other aspect of her powers kicked in and she began to see “echoes” of recent events. Whilst no one else could see it, Suzanne was able to replay the moment her parents were 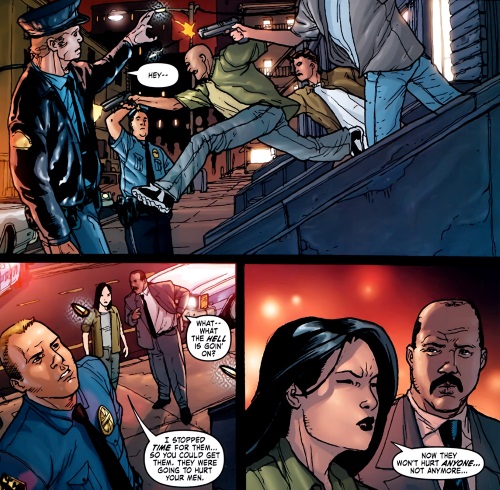 murdered and follow the men that shot them. She followed them back to their base and, when she looked in the window, she saw the men celebrating. Instead of going in herself, Suzanne decided to call the police and give them an anonymous tipoff.

The gang members didn’t go down without a fight and they left the building all-guns-blazing. Suzanne watched from a distance and actively used her powers to freeze the criminals on the spot and save the lives of the policemen. Afterwards, she told the detective on the case how she had survived the first shooting and how she helped the police the second time. Knowing what this meant, the detective went off and called Moira MacTaggart, a renowned scientist in the field of mutants. Moira offered the young girl a place with her and so, with nowhere else to go, Suzanne accepted. [X-Men: Deadly Genesis #3]

Suzanne travelled to Scotland and took up residence on Muir Island, where she was joined by other wayward mutants Petra, Gabriel and Armando. With the help of Professor X of the X-Men, Moira devised training scenarios for Suzanne, now going by Sway, and the others that would push their powers to the limits in a bid to help them control their gifts. Not long after, Professor X came to Muir Island in the middle of the night in dire need of the students’ help. His team of X-Men had been taken captive on a mission and he feared for their lives, so he wanted Suzanne and the others to go save them. Eager to impress the leader of the X-Men, Sway and

the others quickly accepted his offer, despite Moira’s reservations. Since time was a factor and they hadn’t had extensive combat training, Professor X used his telepathy to give them a mental crash course. Whilst mere hours passed for them in the real world, the students received months of training in their minds. With time running out, they received new uniforms and were off on the Blackbird, on their way to a mysterious island to save the X-Men. [X-Men: Deadly Genesis #4]

As it was later noted, Sway and the others were doomed before they even set foot on the island of Krakoa. The real threat to the team wasn’t on the island… it was the island itself. After landing, they made their way through the jungle, taking out anything that that the living island threw at them. Using Sway’s powers, they managed to follow the footsteps of the X-Men in the hopes of finding them. Eventually coming across Cyclops, they freed him from his bindings and took his back to the Blackbird. Since their arrival on Krakoa, however, their life force had been unknowingly and slowly leeched out of them and by now they were starting to become noticeably weak. When 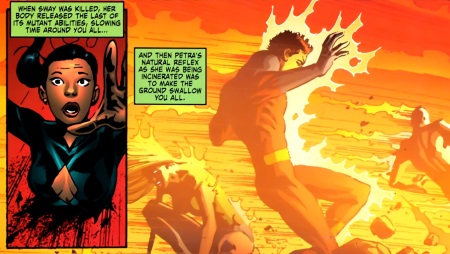 they freed Cyclops, they had angered Krakoa, and so when they ventured back into the jungle they were facing a much stronger foe. Sway was the first to fall, as she was literally torn in two by one of Krakoa’s golem-like avatars. As her body died, she released the last of her time-energy and slowed the passage of time for the others. Whilst they were also seemingly killed in a ball of fire, it had been the combination of Sway and Petra’s powers that in fact allowed some of the others to survive. [X-Men: Deadly Genesis #6]

Sway’s body had been sunk into the depths of Krakoa by a dying Petra, along with the severely injured Gabriel and Armando, now called Vulcan and Darwin respectively. Professor X believed them all dead though and would go on to send yet another team of X-Men to save his original group. He kept the existence of Sway and the others a secret, going as far as to wipe Cyclops and Moira’s minds of them. During the sunsequent mission with the new team of X-Men, Krakoa was cast out into space with Sway’s body with it, forgotten about for years.

In a strange turn of events, Vulcan and Darwin managed to survive the experience and returned to Earth, informing everyone of what had happened. Years after her death, Sway’s story was told and she was finally given a gravestone, alongside Petra’s, as one of the X-Men. [X-Men: Deadly Genesis #1-6]

In What If?...Deadly Genesis, Sway and the rest of her team survived their encounter with Krakoa, though they only managed to save Cyclops of the original X-Men. Krakoa was cast into space by Vulcan and Petra, seemingly forever. In the passing years, the X-Men honored their fallen comrades, whilst becoming one of Earth's premier superhero teams. Vulcan especially was regarded as one of the world's greatest heroes but that all started to fall apart when Krakoa was discovered floating in space. When a team managed to explore the island, they found evidence that Vulcan had accidentally killed Jean Grey and then murdered the other X-Men to cover his tracks. When Vulcan was confronted with this knowledge, he began to lash out at his accusers and it was only Sway's quick thinking that gave the other X-Men time to come up with a plan to stop him. Vulcan was depowered and forced to live on Krakoa as a punishment for his crimes. To make him face up to what he had done, Sway used her powers to create a time loop of his original actions on Krakoa, forcing him to watch his younger self murder the X-Men again and again. 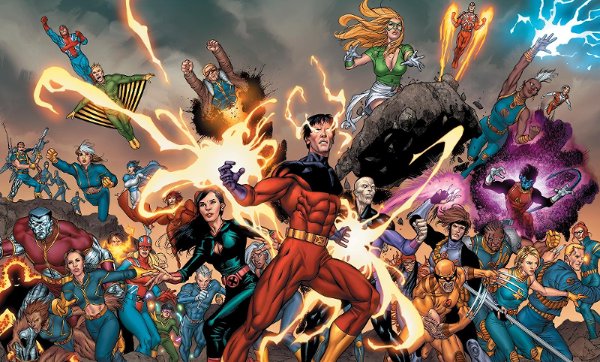