Judas Traveller was created at the onset of the Clone Saga, a two year long, weekly-published event that consumed the Spider-Man titles from 1994-1996. Traveller was introduced without a clear goal in mind, existing as a mysterious figure with unexplained origins whose quest to "understand the true nature of good and evil" was murky at best. His otherworldly, nigh-omnipotent powers were eventually explained away as tricks and illusions using a combination of his psionic abilities and technology, making this god-like character fit in better with the street-level crime commonly found in the world of Spider-Man.

Before that, however, numerous ideas were considered regarding Traveller's true origins. Several writers took his examples of god-like power literally, and imagined he was an actual fallen angel or even Judas Iscariot himself, condemned by the One Above All to walk the Earth until he came to truly understand and appreciate the nature of good and evil. His constant companion and alleged servant, Scrier, would have been revealed as Mephisto in disguise, deliberately manipulating Traveller to prevent the very revelations the Almighty endeavored to teach him. Their final conflict would have set the stage for the end of the Clone Saga, which Marvel was desperate to end in a satisfactory but definitive manner after the idea meandered for four times longer than the original proposal. Traveller and Mephisto would have used Peter Parker as their pawn in a last test of good and evil, a complicated plot that would create a time loop, sending him back in time to become Ben Reilly and thus revealing BOTH Peter and Ben were the original Spider-Man. 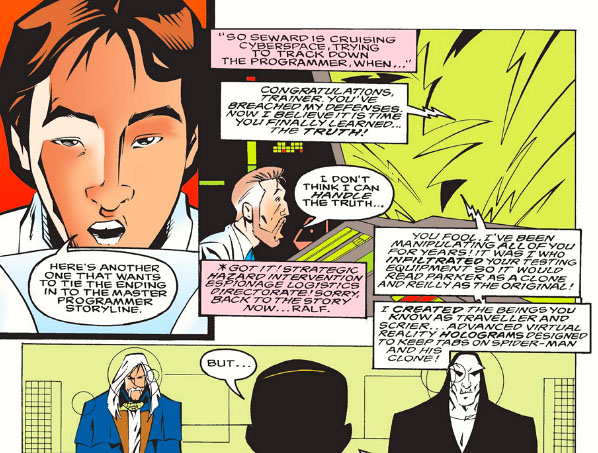 Other explanations for Judas Traveller were equally absurd and centered around ways to undo the revelations at the Clone Saga's halfway point that Ben was the real Peter Parker and Peter was only the clone. Those tests were done in the laboratory of Ben's friend, geneticist Seward Trainer. One idea was that Judas Traveller was in his own time loop, an alternate future version of Trainer who named himself Judas after betraying Peter and falsifying the lab results to make Ben seem like the original. Another idea focused on the Master Programmer, a virtual intelligence linked to the female Doctor Octopus. It was the Programmer who digitally accessed Trainer's computers and altered the test results to take revenge on Spider-Man. The Master Programmer also created Traveller and Scrier as advanced virtual constructs to carry out its bidding. As chaotic as the memos and ideas were being passed around the Spider-office, they got the last laugh by publishing a one-shot special which memorialized these whims and possibilites in Spider-Man: 101 Ways to End the Clone Saga #1.