• Produce gelatinous bio-plasma
from his throat, expelling large
amounts of corrosive bile to
dissolve matter in his path 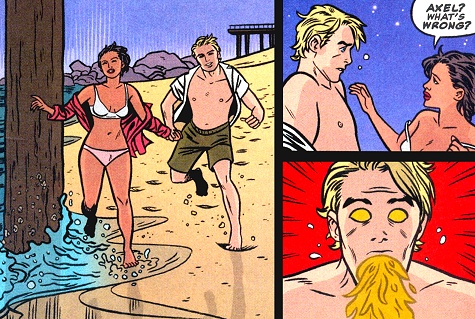 Axel Cluney’s powers first manifested when he was just fourteen years old. Under the influence of alcohol, Axel and a girl he’d met that evening ran to the beach and started to become intimate under a pier. As they kissed, Axel felt strange, as if his stomach was cooking inside, and before he knew it his powers kicked in, causing him to vomit acid all over the girls face. [X-Force (1st series) #116]

Over the next years, Axel tried to come to terms with what had happened. Apparently, he never managed to gain full mastery over his mutant power, forcing him to wear a specially designed mouthpiece at all times. At some point in his late teens, Axel joined the media savvy superhero team X-Force and chose the codename Zeitgeist for himself. Under the guidance of a retired superhero now only known as Coach, Axel eventually became X-Force’s team leader.

Adored by the masses, the majority of the team became obsessed with their public image, including Axel. Living the high life and often in the company of groupies, he would watch footage 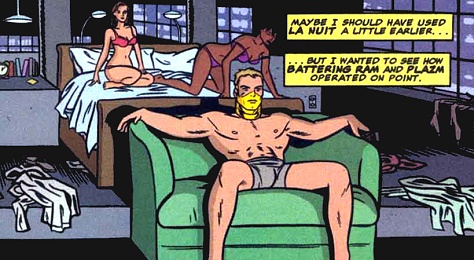 of the team on previous missions,  studying and evaluating their performance. Over time, Axel started to question himself and came to resent the lifestyle. Plagued by nightmares of when his powers first manifested, Axel was never able to recall the poor girl’s name.

During one public engagement, Axel saw the grey-skinned Edie Sawyer in a crowd and, mistaking her for a mere groupie, asked one of the security guards to invite her back to his dressing room. Edie refused but, at a later event, she teleported onto the red carpet in front of Axel in an attempt to impress him. Edie joined the team as U-Go Girl and Axel spent time attempting to seduce her until eventually the pair briefly dated. While Edie may have genuinely cared for Axel, to him she was a means to get some extra media coverage. [X-Statix #10]

It was common for members of X-Force not to last long, as many of them were inexperienced and not suited for battling the team’s enemies. For every member that died, there were dozens of other teenage mutants eagerly wishing to take their place in the spotlight.  When Tike Alicar, aka the Anarchist, joined the team, Axel took an instant dislike to him, believing him to be mentally

unstable and not a team player. Before their first mission together, the Coach discussed with Zeitgeist that the team’s investors wanted more fresh blood. Seeing no alternative, the Coach detailed a plan where the popular Boy Band, Boyz R Us, would be held captive by non-political terrorists and all of X-Force, apart from Zeitgeist and the Anarchist, would be killed in the rescue attempt.

Axel reluctantly went along with the plan and the team teleported into Sonic TV studios, where the band was being held. The majority of the  terrorists were dealt with easily and, with the threat 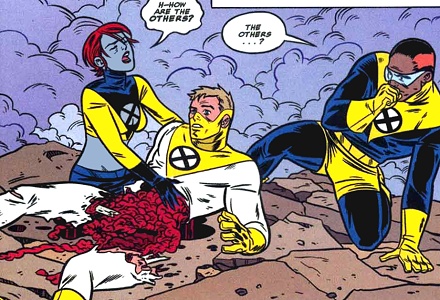 apparently over, Zeitgeist looked out of the window at the adoring public below, mulling over the price of fame. Annoyed by his teammates’ bickering over the things he resented, Axel hesitated a bit too long as a helicopter came into view, opening fire on everyone in the building. Zeitgeist was gunned down among most of his teammates. As he lay dying in U-Go Girl's arms, he finally remembered the name of girl whose face he’d burnt off: Felicity. [X-Force (1st series) #116, 120]