Hi, I'm Delta Canyon, entertainment reporter for UXNews Online. Welcome to the first in a series of special interviews that lift the lid on your favorite and maybe not so favorite creators. Like a lot of people, I have a great deal of love for comics and the characters portrayed in them, and thanks to sites like UXN we can get a fuller understanding of what makes them them. But what about the creators that breathe life into them? Do we know enough about the 'superstars' of the comics medium? Do we know what cheese they like? Well, that's where Xposed comes in. Unlike other sites where interviews are just an excuse to preview the current work, we try to see what makes those superstars tick. We get answers to questions you didn't know you wanted answered, because we can and we will.

Our interviewee today is the current writer of not only Ultimate Fantastic Four but the 'adjectiveless' X-Men Title, who, with his first story arc is adding Sabretooth, Mystique and Cable to the X-Men squad. He's not related to Mariah or Drew and I wouldn't be surprised if his surname has been misspelled on a few occasions. Ladies and Gentlemen, lets Xpose Mike Carey! 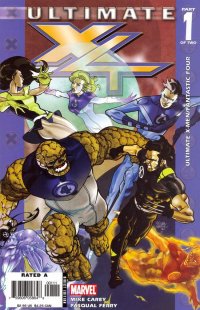 Best part of working in comics?
Pretty much all of it. Collaborating with amazingly gifted graphic artists; letting your imagination run wild and being paid for it; being part of a tradition that goes back to Lee and Kirby and beyond.

Worst part of working in comics?
Occasionally having a book come out and finding that someone's tweaked your dialogue so that it doesn't sound right.

At a party Refer to your job as:
Writer - because I write novels and do movie work too.

Previous employment
I taught the British equivalent of senior high school for the best part of fifteen years. I was an accountant once, too: that kind of didn't work.

Why Comics?
I learned to read from comics. They've always been a part of my life.

If you couldn't work in comics, what job would you do?
Well, other kinds of writing. But if I couldn't write at all I'd go back into teaching.

What job wouldn't you do?
I'd never be an accountant again brother, that's for sure.

First Convention you attended? Any highlights?
UKCAC - the UK Comic Arts Convention, in London. Highlight: meeting Karen Berger one-to-one. She gave me some career advice which really helped me on.

Why superheroes?
Because superhero stories are a genre that comics have truly made their own, and that works better in comics than in any other medium. And because big, epic storytelling appeals to me.

Do you read online reviews of your own work?
Yeah. Probably shouldn't, but do. Someone I was talking to recently said to me "the bad reviews only have power over you if you read the good ones" which is probably true. But I still read them.

First comic title/Series you fell in love with?
As a kid, the Fantastic Four. As a teen, Elaine Lee and Mike Kaluta's Starstruck. 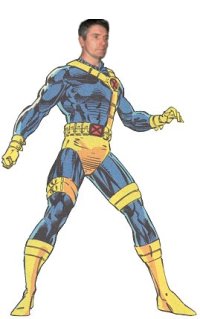 If you had to wear a superheroes costume, who's would you wear?
Cyclops.

Favorite character?
I'll have to give you a list. Rogue, Cyclops, Beast. Reed Richards. The Thing. Doctor Strange. Spiderman. Adam Warlock. Batman. Hourman. Rose Walker from the Sandman. Rorschach from Watchmen. Brucilla the Muscle and Galatia 9 from Starstruck. Amy from Amy Unbounded.

Worst character ever?
The Gael. He was a Daredevil villain and he was meant to be an IRA assassin.

Civil War, whose side are you on?
Captain America's! Leave our heroes alone!

Graphic Novels or Single issues?
Both. I read, and buy, both. I love getting the full power of the cliffhanger, but I also love the convenience of trades.

Jean Grey or Emma Frost?
Ohhhh, that's tough. Emma Frost, but guiltily and not making eye contact with anyone.

What's the weirdest thing a fan has asked you, besides this?
Whether I'd slept with anybody famous.

What creative team would you like to see working together and on what title?
Grant Morrison and Frank Quitely on Doom Patrol - the Crazy Jane/Robotman/Rebis Doom Patrol.

What News/Rumor story do you think has had the biggest impact on comics?
I'm hugely out of the loop, so I'm not the best person to answer this. "Elvis sighted on Moon"?

Have your say, what else should we know?
I'm the wimpiest, scrawniest product of a really tough area. Walton and Bottle, when I was growing up there, had the highest property insurance rates in the whole of the UK - higher than Belfast, where they had a war on! How I survived I'll never know. I'm probably a ticking time bomb.

Thanks Mike, appreciate you taking the time to talk to us today. I've been your host, Delta Canyon and I hope you'll join us again on the next Xposed!