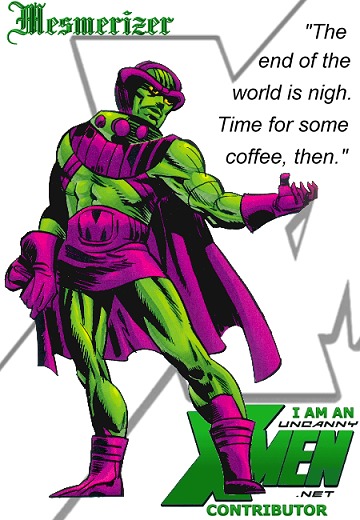 In the Brief:
Even the avidest readers of comics end up taking a break from them sooner or later. Likewise, I gradually distanced myself from comics in early 2001, after a five-year infatuation with X-Men, Spider-Man and the rest of the gang. Preparing for my final exams several months later and, subsequently, opening up to the much broader life of academia obviously reinforced my feeling of disinterest in comics (combined with my disappointment in how stories were shaping up in various titles and the overall quality – ironically enough, I left just before the beginning of the much-acclaimed Morrison era). Around 2003 (I can definitely recall reading about Havok and Polaris’ non-marriage here) I accidentally bumped into UXN and was… mesmerized by the seemingly endless information I could peruse! The proverbial X-info freak in me had finally found Heaven. Needless to say I spent quite some time afterwards, familiarizing myself with every little corner of the UXN universe. The summaries, the spotlights, the glossary, the articles, the gallery and everything else became a solid basis of reference for all things X for me ever since, whenever I wanted to check on something or learn something new. In the following years, I kept visiting the site with varying degrees of frequency but never lost contact with it as I wanted to know what was going on in the X-Universe since I wasn’t buying the books. I started – hesitantly – reading comics again in 2006 and a few months ago I finally decided to start contributing to the UXN myself – a though I was entertaining for quite some time. And I’m glad I did! Feels great when you’re a part of something this big.

History:
I was born in Athens, Greece. At age three, my folks made the unwise decision of moving to Katerini, a small town in northern Greece, where they spent three years establishing and running a (not viable) local newspaper, an experiment which ended in disaster. Following that, we moved back to Athens, where I live ever since.

I’ve been reading comics ever since I had the ability to read, albeit not superhero comics. I started out with Disney stuff until, at age eleven, my cousin, who was always looking for the hippest thing around, introduced me to the reality of Marvel Comics. I was already vaguely familiar with the X-Men. They were these strange-looking freaks… and didn’t they also have their own animated series or something? Anyhow, my first Marvel issue ever was actually a reprint of The Adventures of Spider-Man (adaptation of Spidey’s animated series). Shortly afterwards, I also picked up copies of X-Men Adventures, the equivalent for X-Men, but I was really hooked with the team after I read some reprints of Claremont’s early ’80s X-Men. The Dark Phoenix Saga and UXM #161 & 166 (all excellent issues) were the first things I read from him. A few months later, I bought my first trade paperback: X-Cutioner’s Song. Suffice is to say, I understood nada of what was going on or who was who but I quickly loved it and it remains one of those stories I hold dear in my heart. Finally, I started buying the original American issues that were being published at the time (1997), starting with X-Men (2nd series) #66 and immediately subscribed for Uncanny X-Men and X-Men as of UXM #348/X-Men (2nd series) #68. I also started buying several back issues and trades.

I read many other Marvel comics in the 1997-2000 period, including Mutant X, Fantastic Four and Spectacular Spider-Man, alongside various others. Then, in early 2001, I called it quits. Last issue I bought from that period before stopping purchasing comics was X-Men (2nd series) #108 – fitting, since it felt, in many ways, the end of a era, due to the deaths of Moira McTaggert and Senator Kelly in that issue.

As abovementioned, the UXN.net kept me company in the following years, as I didn’t venture to go back to the comics – until finally returning to them after a five-year gap. I’m finally interested in them again and it feels revitalizing, to say the least.

I hold a degree in English language/literature and I’m currently a student of journalism. My daily interests including reading (fiction, mostly), writing (fiction), watching films (the stranger, the better), listening to music, painting, surfing the web and desperately trying to overcome my tremendous innate sloth and create something of my own in this world. I’m frequently writing articles for my university’s online magazine. I’m also currently discussing with a (novice) director friend of mine about staging a play of mine – I highly suspect I’m going to get booed if it does get staged, though!