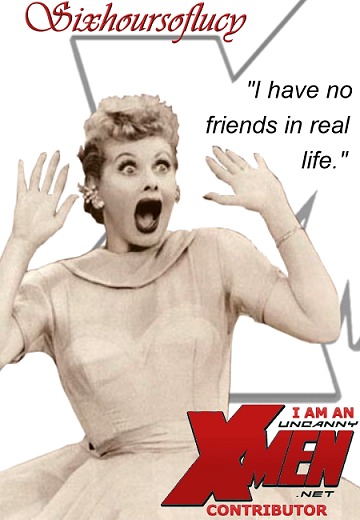 In the brief:
I discovered this site’s wealth of issue summaries when first reading Uncanny X-Men back in January 2007. I started noticing gaping holes in the core story line, and those little editorial boxes by people like Ann Nocenti and Louise Simonson (née Jones) clued me in to the fact that much of the story was occurring in other books like the New Mutants and X-Factor. Uncannyxmen.net proved invaluable in figuring it all out. Over the next year, I checked the site compulsively to read the updates… and this was well before I ever discovered there was a forum. UXN proceeded to serve as my raison d'être (and primary social outlet) during the next few years of my life, when I lived a mostly friendless, celibate existence in Silverton, Oregon. Since moving to Portland, I've broken a way from the site a bit, stopped compulsively writing issue summaries and started socializing with people irl more (gross, I know), but the site will always hold a special place in my heart and still occupies way too much of my free time, only now it's mostly on the image-editing end.

My life story, as told through comics:
After a relatively isolated yet studious childhood, a generic growing period during college, and the typical post-graduation aimlessness, I finally discovered the X-Men. I picked up the 40 Years of X-Men DVD the Christmas season after I graduated college with a degree I didn’t care about. Had I known how drastically that purchase was going to alter my life, I might have reconsidered.

Anyway, I started reading X-Men in January 2007, starting with the infamous Giant-Sized X-Men #1. By the time that month ended, I had read through about 16 years of Uncanny X-Men back issues, but then I had to leave to fulfill a commitment to AmeriCorps*NCCC, a ten-month community service program we have here in the states. Lame. I must say, it was a major imposition in my newfound comic-reading habit, as I rarely had the chance to go to the local comic shop. In fact, I discovered that in many rural cities in the South, there usually was no local comic shop. So, I pored over the issues I managed to pick up and killed time by drawing my own comics on the work picnic tables with a Sharpie and reading prose books instead. Lame.

After returning home, I picked up where I left off with X-Men while pushing through a quasi culture-shock induced depression. The comics I had to read at the time certainly didn’t help; the mid-nineties “crazy about crossovers!” X-Men, with its often vapid characterization and excess of dangling storylines, really took their toll on me, and many times I was tempted to give up. Fortunately, I was rescued by the works of Joe Casey and my unashamed love, Chuck Austen. Those two really pushed me through that rough patch and compelled me to catch up with what was going in the modern world of the X-Men.

For a few years after AmeriCorps, I worked for Habitat for Humanity in a small, rural town in Oregon, where I lived that aforementioned friendless, celibate existence, spending 80 percent of my free time pounding out issue summaries for the site. After realizing I didn't want to spend the entirety of my 20's glued to a computer in my dirty apartment, I got a job in Portland and subsequently moved in with some strangers in this great city. Against my better judgment, I fell in love with one of these new roommates, and acting in defiance of a unanimous chorus of naysayers shouting that you should never shit where you eat, I went for it — and it worked out! Eventually, anyway. It was around that time that I took a hiatus from UXN, only to return a year or so later wanting to help again. When I returned, I realized that my skills were probably most needed on the image-editing end, so I underwent some training and began helping out there. Nowadays, image editing is pretty much all I have time to do for the site, though I still do get to write the occasional article or update.

I'm currently finishing my final year of school at Portland State University, where I'm getting a bachelors degree in electrical engineering. Between school, work, my boyfriend and our dog George (...George Glass), I don't have as much time for UXN as I would like, though I still carve out as much time for site work as I can, often at the expense of my real-life obligations. I wouldn’t have it any other way, though; it’s far more important that X-enthusiasts around the world know in which issue exactly Dani Moonstar received her second power-up than it is I maintain an acceptable work-life balance.

As for non-X stuff, I'm a total Hickman fanboy and lived for his Avengers/New Avengers/Secret Wars run. Brian K. Vaughan is another favorite of mine, as I adore both Y: The Last Man and Saga.

Favorite films: Pulp Fiction, Clueless, Aliens, It's a Wonderful Life, Scott Pilgrim vs. the World, A League of Their Own, Before Sunset, Donnie Darko, Groundhog Day and A Very Brady Sequel.

Heroes: Nightcrawler, because he knows he’s a freak but keeps it real anyway; Elaine Benes, because she is the Queen of Confrontation; and Jan Brady, because she had the gall to make up a boyfriend in order to get people off her case.

“Looks like I picked the wrong week to quit amphetamines.” – Airplane!