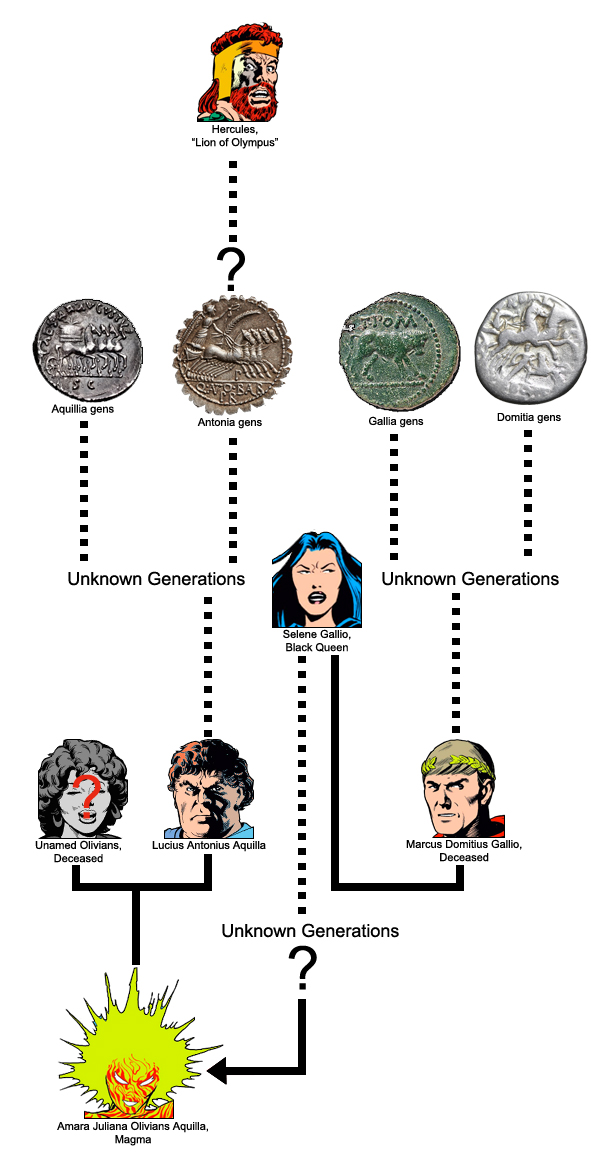 The Dark Goddess and the promise of Rome 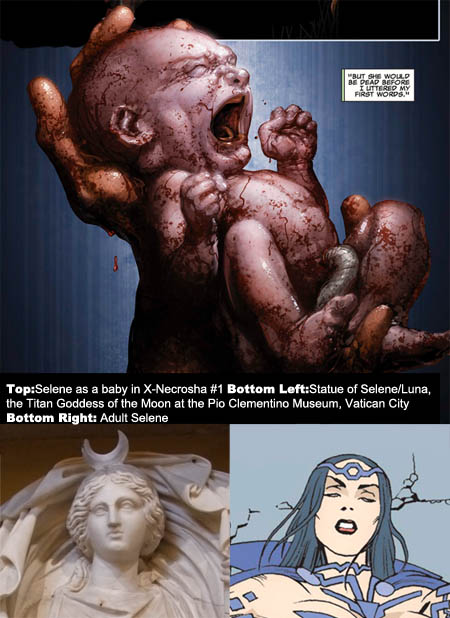 The ancient Selene was born in central Europe approximately 17,000 years ago, making her one of the oldest living mutants. Selene claims her mother was a child herself when she gave birth to her and presented her to her tribe. Selene's psionic “vampiric” mutant powers were active from infancy. Selene claimed her mother died before she spoke her first words, sacrificing her life force to her so she could survive. Selene's tribe believing the newborn to be a goddess also sacrificed their life forces to the child for sustenance until they went extinct. [X-Necrosha #1] Very little is known of Selene's exploits for approximately 15,000 years, save that she studied the mystical arts to some degree and feuded with the sorcerer Kulan Gath. [Uncanny X-Men (1st series) #191-192] She would later claim that she had not met any other mutants like herself during this period. [New Mutants (1st series) #9-11]

Note: The name Selene comes from the Greek goddess of the moon. Selene was the daughter of two the titan gods, Hyperion and Theia, who predated Olympians, such as Zeus and Hercules. Selene was also the twin of the sun god, Helios. She was closely associated the goddess of witchcraft Hecate. Under her Roman name, “Luna,” she had places of worship in Rome on the Aventine and Palatine Hills.

Approximately two thousand years prior to the fall of Rome, Selene became active in the capital. [X-Force (3rd series) #11] Following the death of Julius Caesar, she managed to manipulate a number of prominent members of Roman society through undisclosed means to flee the capital and head west, across the Atlantic Ocean, eventually settling in a hidden valley in the Amazon rain forest in what is now modern-day Brazil. The society was called Nova Roma. The Nova Romans would eventually take in Incan refugees, becoming a combination of Roman and Inca cultures. [New Mutants (1st series) #9-11]

The Noble House of Nova Roma

Ancient Romans used a particular naming structure called the tria nomina, which was comprised of praenomen, nomen, and cognomen. In modern context, this means “first name,” “father's family name” and “nickname.” The family name would often have masculine and feminine versions, similar to modern Polish surnames. Interestingly, the tria nomina does not appear to be in practice for the citizens of Nova Roma, with the formatting of their names being far more in line with current western practices. [What's in a Name? A Survey of Roman Onomastic Practice from c. 700 B.C. to A.D. 700]

If we take Magma and her father Lucius, both of their names end with Aquilla but feature what appear to be additional family name Olivians (fictitious) and Antonius (historical). Lucius' rival, Marcus Domitius Gallio, also has two family names. Based on the three examples we have so far, it's a fair hypothesis that the Nova Romans names follow the following structure:

To give greater context to the significance of Magma's family lineage please find further information about both Aquilla and Antonia's gens.

Note: As Selene's marriage to Marcus did not produce any heirs, we are not expanding on the Gallis or Domita gens in this article.

The Antonia Gens was a Roman family of great antiquity. The first member of the family to achieve notoriety was the Roman politician Titus Antonius Merenda, who was one of the co-authors of Law of the Twelve tables. The tables were unique at the time of their creation in 451–450 BC, as it was the start of laws being passed by governments and being written down so citizens could read them.

The most famous son of the Antonia gens was born nearly 350 years after the creation of the Twelve Tables: Marcus Antonius or as he is most commonly known Mark Antony, Roman general, politician, traitor and lover and husband of Egyptian Queen Cleopatra. In totality Mark Anthony is reputed to have married five times and had eight children. Three of the children were born to Cleopatra. Mark Anthony had experienced great success in life as a both politician and a military man but falling for the Egyptian queen proved to be his downfall. Ultimately, he sided with her in a conflict against the Roman Republic that ended in the suicides of both of them. He was, however, survived by numerous children who continued to be active in Rome.

The Greek philosopher and historian Plutarch featured Mark Anthony in his renowned biographies “Parallel Lives.” In the text, he wrote that Mark Antony claimed his family descended from Olympian demi-god Hercules, the son of Jove/Zeus, father of the gods. While easily dismissed as a tool of propaganda in real world terms, his lover Cleopatra was famous for example for associating herself with the goddess Isis to legitimize her rule in Egypt. In the context of the Marvel universe, such a connection is possible and could even be probable. Hercules is real in the Marvel universe and has served prominently among the Avengers on numerous occasions. The hero's amorous exploits are also well documented, having bedded numerous heroines and heroes, such as Psylocke, Black Widow, Northstar, Marvel Boy, Snowbird and Namora. As such, siring the Antonia family is indeed possible. According to Magma, Hercules was still worshiped in Nova Roma but, if there was a familial connection or a believed familial connection between the two, she did not address this when the two met in New Mutants (1st series) # 81.

Possible ancestors through the Antonia line would include Mark Anthony, Hercules, Cleopatra and Zeus. 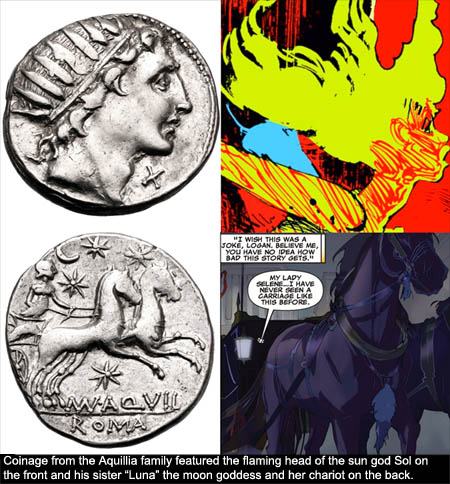 Like the Antonia gens, the Aquilla gens were also a well-established, noble house from ancient Rome but they were decidedly more minor.

The most interesting aspect of the family in relation to Magma and Selene is the gods they placed on their coinage. Aquilla coins featured the face of the sun god, Sol, with his flaming crown on the front. On the flip side, his sister Luna and her moon chariot, a likely inspiration for the opposing natures of Magma and Selene and a nod to their own alleged familial connection.

From New Rome to New York 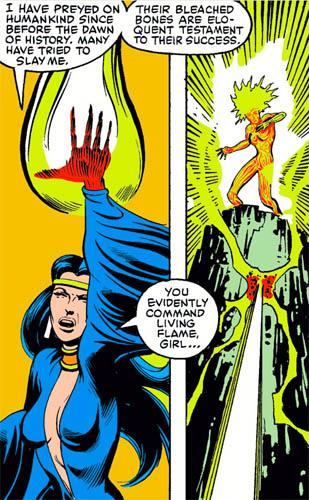 Selene would stay in Nova Roma for approximately two thousand years, adopting multiple identities. In modern days times, she was operating under two different personas, one of an Incan noble woman Selene Gallio, wife of Senator Marcus Domitius Gallio and the other of the Dark Priestess, a prominent religious figure. In both roles, Selene attempted to manipulate the Nova Roman society. As the Dark Priestess, she took young female sacrifices to continue her own life and increase her power, presumably this included Magma's mother, who, she claimed to have killed. In her position as wife of Senator Gallio, she pushed him to attempt to assert control of the society, turning it into a monarchy rather than the flawed democracy it was currently. [New Mutants (1st series) #9-11]

Both schemes would eventually be foiled due to the discovery of Nova Roma by outsiders, the New Mutants. The New Mutants would align with Selene's husband's rival Lucius Antonius Aquilla and his daughter Amara Luciana Olivians Aquilla. Selene's husband would die in single combat against Lucius and Selene's attempt to sacrifice Amara would be foiled when the girl's own mutant abilities to manipulate the earth and flame were triggered and Selena appeared to be imprisoned under molten earth. 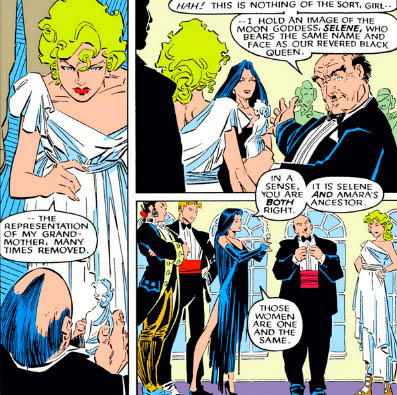 Afterwards, Amara would leave her father and Nova Roma to join the New Mutants to learn about her powers. Despite her apparent death, Selene survived and, with her interest piqued by the outside world, traveled to New York and joined the Hellfire Club. [New Mutants (1st series) #9-11]

Selene and Amara would remain oppositional figures to each other. During a detente between the Hellfire Club and the X-Men, the two women met at a gathering in which Selene claimed to be Amara's much revered grandmother many times removed, to Amara's horror. While Selene's claim has never been definitively proven it's important to take Selene's claim into context:

1) The two characters have been stated to bear a resemblance to each other.

2) When we were introduced to Selene, she was the wife of a member of Nova Roman nobility, so the idea that she might have participated in a ruse such as this previously is not unlikely.

3) There are no other known mutants in Nova Roman society other than Selene and Magma, making some degree of kinship between the two likely.

4) There are also some very loose comparisons between the two women and their powers, Selene possessing the powers to manipulate inorganic objects, such as stone, and Magma being able to manipulate the earth.

5) In the alternate universe series New Mutants Forever, penned by Magma and Selene creator, Chris Claremont, Selene was Magma's paternal grandmother, indicating that Claremont's intention was that the connection between the two women was intended to have legitimacy. While possibly a misprint, the recap page for New Mutants (3rd series) #6 also referred to Magma specifically as Selene's granddaughter.

Attempting to understand why a being such as Selene might procreate with creatures she considers lesser can appear unfathomable but below we present the two most likely scenarios.

1) Selene was attempting to create a peer: She stated that she never met others like her when she met the New Mutants. Initially, she seemed happy to meet Danielle Moonstar for example, as she recognized her psionic powers were the closest to her own power-set out of the assembled mutants. She also later created a team of mutants with death-based abilities similar to herself during the Necrosha event. Despite “the glory” of being Selene, she may simply be lonely.

2) Diet: On a more base level, given her own sense of superiority, she may have considered occasional interbreeding with the Nova Romans gave her better “food.” As she claimed to be Amara's grandmother many times over, it is possible that a large percentage of Nova Roman's might be related to her to some degree, given it was a closed society.

It has been stated that Magma has a cousin named Maya who is the same age as her and already has a son. It was never verified if Maya was a paternal or maternal relative. It is possible there may be other relatives in Nova Roma who have yet to appear or display powers. [New Mutants (1st series) #56]

Currently, Magma and Selene are both living on the mutant isle of Krakoa, as Selene is one of many villains that was granted amnesty. Given their contentious relationship, it is likely that any interaction could be explosive, as they have much to discuss. [House of X #5]