Written By:
Blanchett.
Last Updated:
27th December 2017
Image Work:
Blanchett.
(click on the image to see a bigger version of it) 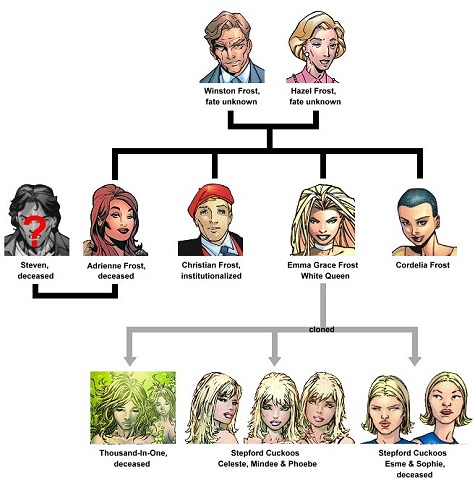 Memoirs of a Dutiful Daughter

The Frost dynasty began in Boston. Winston Frost was a wealthy philanthropist. He and his wife Hazel had four children, Adrienne, Christian, Emma and Cordelia. While to the outside world it appeared that the Frost family was living the American dream, nothing could be further from the truth. Winston Frost was a cold, domineering man who controlled every aspect of his family’s lives and on top of this he was also an adulterer. Hazel found it impossible to cope with her husband’s adultery and his treatment of their children so she sought solace in pain killers. 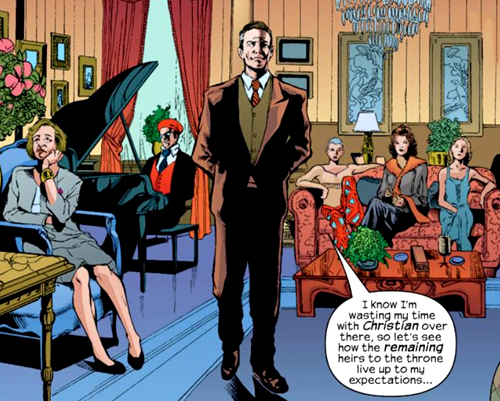 The Frost children dealt with their mother’s detachment and their father’s high standards in different ways. Adrienne was the eldest and lived to gain her father’s favour. She was ambitious, ruthless and very driven. Adrienne also had a secret power of psychometry which she used to her every advantage in the hopes of one day taking over her fathers company. Christian was the only boy and second born. He had completely given up even trying to live up to his father’s standards and for a brief period seemed to find some relief in being the family “disappointment”. He was also gay, a fact he kept very secret especially his father. Cordelia was the youngest and she refused to be ignored. She seemed to be spiralling down a path of self destruction in an attempt to gain attention from Winston. She also had an undisclosed telepathic ability the extent of which has never been disclosed. It would be Emma however, the middle girl in the family, whose mutant powers would have the most impact on the family and make her the most prolific of the Frost children.

In her late teens Emma’s telepathy began to manifest. Her new powers gave her a newfound confidence. Emma now started to stand up to her father particularly about his treatment of Christian. While on vacation, Adrienne revealed Christian’s homosexuality to the family. After this revelation, Winston’s behaviour towards Christian got far worse. Christian started to abuse drugs and even attempted suicide. Emma eventually got so worried about Christian that she asked her father for help. Winston was impressed and for the first time ever he admitted that he was proud of her and claimed he would help Christian by getting him into a family clinic. Later that evening, with the entire family in attendance, Winston decided to announce who his principal heir would be. Despite Adrienne’s years of loyalty, Winston chose Emma as his main benefactor. While this was happening Doctors arrived to take Christian to a mental institution. Emma was so disgusted by this that she severed all ties with her family and claimed she would make her own way in the world. At some point after being institutionalised Christian suffered a complete mental breakdown and along with his parents his ultimate fate has not been revealed. [Emma Frost #1-6, New X-Men (1st series) #139]

Making her own way 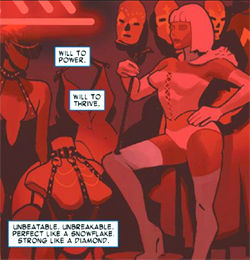 Later Emma joined the Inner Circle of the Hellfire Club, Using the Club’s sponsorship, she open up her own school for mutants, the Massachusetts Academy, where she trained the Hellions. A couple of years later, the Hellfire Club was attacked by Trevor Fitzroy and a cadre of future Sentinels. Despite the intervention of the X-Men, Emma was knocked out by a sentinel and rendered comatose, whereas most of her students got killed during the fight. Emma was taken back to the X-Men’s mansion and lay in their sick-bay for months. [Uncanny X-Men (1st series) #281-284] When Emma woke up several months later, the terrible news of the Hellions’ fate caused Emma to re-evaluate her life. [Uncanny X-Men (1st series) #311-314] Together with the X-Man Banshee, she returned to the Massachusetts Academy, the Institute now being dedicated to training Generation X, the next generation of X-Men. [Uncanny X-Men (1st series) #318, Generation X (1st series) #1]

After a series of bad investments Emma was forced to turn to Adrienne to help finance the school. A lot had changed since the sisters had last seen each other. Adrienne had not only assumed control of Frost Enterprises after Emma rejected it, she had also married a man named Steven who she later killed when he betrayed her. [Generation X (1st series) #54] Never having forgiven Emma for the fact that their father had initi 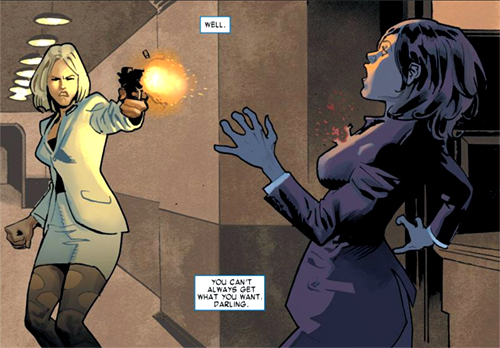 ally chosen her as his principal heir, Adrienne realized that “helping” Emma would put her in a position to truly destroy her sister. She provided Emma with the needed funding for the school in exchange for becoming co-headmistress. It wasn’t long before Adrienne revealed her true colours as she “outed” the school’s secret of harbouring a mutant team and planted bombs in the academy which resulted in the death of one of Emma’s students, Synch. Emma finally had enough of her older sister and shot Adrienne. As a direct result, Emma inherited Adrienne’s money, thus ending the school’s financial problems. [Generation X (1st series) #70] 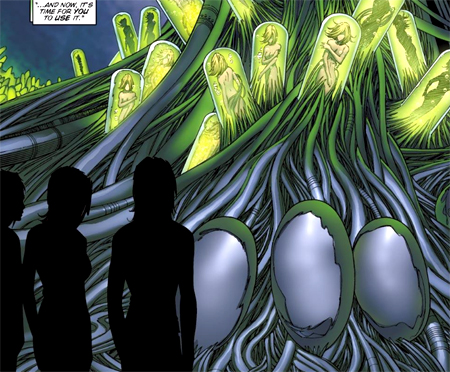 Shortly after Emma manifested her secondary mutation to transform into organic diamond, she joined the X-Men and became a member of the teaching staff at the Xavier’s school. In that function she first met the Stepford Cuckoos, five telepathic sisters named Sophie, Esme, Phoebe, Mindee and Celeste. [New X-Men (1st series) #120] Emma felt an immediate kinship with the girls but she was unaware as were they that they were actually related. As it would be revealed much later, Emma’s ova cells were harvested by John Sublime during the time she had been in her coma. Being the driving force behind the Weapon Plus programs, Sublime used Emma’s DNA for the creation of thousands of clone daughters, whose telepathic minds could synch up with one another to function as one. The project was called Weapon XIV, and five of these clones - the Stepford Cuckoos - were placed at the Xavier Institute to infiltrate the X-Men. Special built-in inhibitors prevented the X-Men from recognizing their similarity to Emma and from asking too many questions about their background. [X-Men: Phoenix - Warsong #1]

Note: Cells from Emma’s ova would only have 50% percent of the genetic material required to “create” a life. It’s unknown if Sublime used a male donor to compensate for that; more likely is that he worked with the DNA segments from various egg cells to fully map Emma’s entire genome. After all, the thousands of clones seemed identical, which wouldn’t be the case if each one was created from a different egg and sperm cell. Regardless, the Cuckoos are no true clones, as there was also some genetic manipulation involved to bestow Weapon XIV with their additional abilities.

The Cuckoos themselves were also unaware of their mission and their true origin. Soon and seemingly without effort, the five girls were Emma’s prize pupils. Tragedy struck during a riot at the school. Most teachers and staff members being incapacitated, the Stepford Cuckoos tried to handle the situation themselves. Sophie amplified her powers by using the enhancing drug Kick, but after she and her sisters had stopped the rampage, Sophie died from an overdose. This incident destroyed the bond the girls had with Emma and the remaining four Cuckoos started to despise her. [New X-Men (1st series) #137-138]

A man named Xorn, who was pretending to be a teacher at Xavier’s but secretly believed himself to be Magneto, took advantage of the situation. He was crafting a new Brotherhood from the student body, and Esme was one of those who joined Xorn. Under his influence, she even attempted to kill Emma. Esme was totally besotted with Xorn, but he didn’t return her feelings and killed her when she was no longer of use for him. Just before she died, Esme was found by Emma. Whereas Emma claimed she was prouder of her than any of the other girls, Esme once more cursed Emma with her dying breath, wanting to be nothing like her mentor. [New X-Men (1st series) #139-141, 147, 150]

Several months later, after the alien Shi’ar tried to destroy the Phoenix Force once and for all, a small fraction of it attached itself to one of the remaining Stepford Cuckoos. [X-Men: Phoenix - Endsong #5] When the girls fully manifest the force for the first time it somehow sets off a trigger, causing Sophie and Esme to dig themselves out of their graves. The zombified Esme and Sophie apparently recalled their true origin and convinced their three sisters to go to the “The World”, the 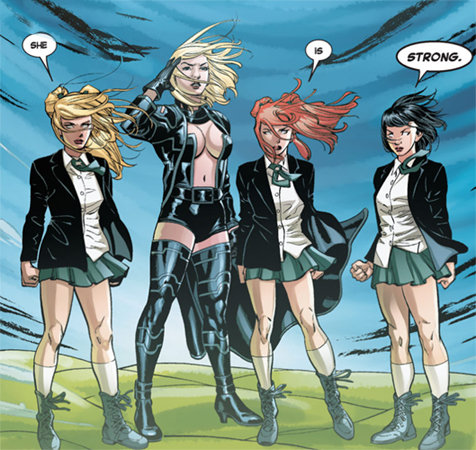 Weapon Facility of their birth. Upon their arrival there, the three Cuckoos learned of their intended purpose as Weapon XIV, but were even more startled to discover the existence of a thousand more clones, called the “Thousand in One”. John Sublime tried to use the combined might of the clones to channel the Phoenix Force, but eventually Celeste assumed control of the power and used it to destroy the “Thousand in One”, also including the re-animated Esme and Sophie. Afterwards, when the Phoenix Force refused to leave her body, Mindee and Phoebe helped Celeste to contain the Phoenix in their diamond hearts. An unpleasant side-effect though, was for the girls to lose touch with all their emotions. [X-Men: Phoenix - Warsong #1-5] Their emotions were subsequently restored when the Phoenix inexpicably left their bodies, allowing them to undo their diamond hearts. [Uncanny X-Men (1st series) #517] Since the return of the girls feeling towards Emma has been changeable with two of the girls actively changing their appearrance and dying their hair to differentiate themselves from Emma. Regardless of their varying opinions of her however, Emma herself has been consistent in that she still regards the girls as family.

As Emma once mentioned a cousin named Jocasta, there may also be another line of Frosts. However, there is no indication on how closely related to Emma she actually is or what side of the Emma’s family Jocasta belongs to. The only information on her is that Emma was not fond of her and wanted to ruin her wedding. [New X-Men (1st series) #131]