(click on the image to see a bigger version of it) 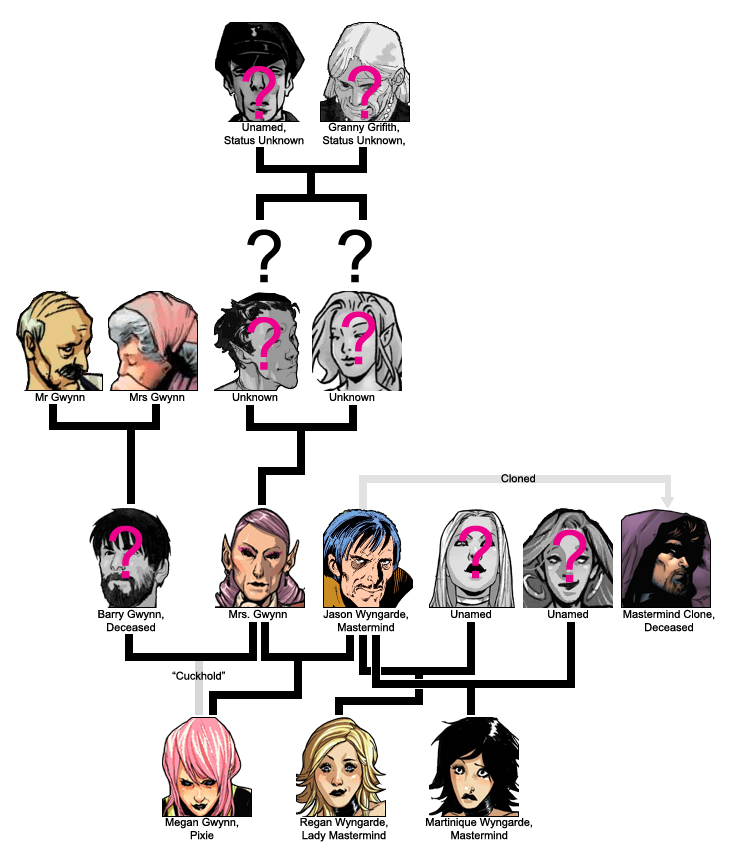 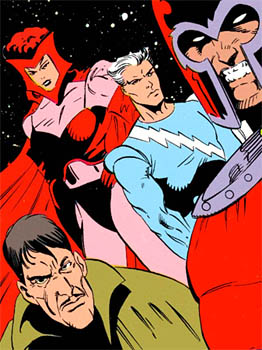 Mastermind, later revealed to be Jason Wyngarde, was one of the first mutants to appear in X-Men comics as a founding member of Magneto's Brotherhood of Evil Mutants. [X-Men (1st series) #4] He was decidedly older than the other mutants in the team, working alongside Magneto since Magneto's youngest daughter Lorna Dane was a toddler, so their partnership likely predated any formalized team. [X-Factor (1st series) #243] Mastermind would eventually part ways with Magneto and become a founding member of the super-villian team Factor Three [X-Men (1st series) #38-39] and later allied with the New York branch of the Hellfire Club. As an associate of the Hellfire Club, he used his powers to manipulate the cosmic entity, Phoenix into falling in love with him and he did for a time seduce and control her. When the Phoenix broke free of his influence, she responded to his violation by putting him into a catatonic state. [X-Men (1st series) #129-134] When he recovered, he foolishly attempted a similar ploy on the Phoenix-empowered Rachel Summers and again ended up in catatonic state. [Excalibur (1st series) #26] He contracted the Legacy Virus, finally dying in Uncanny X-Men Annual #17. 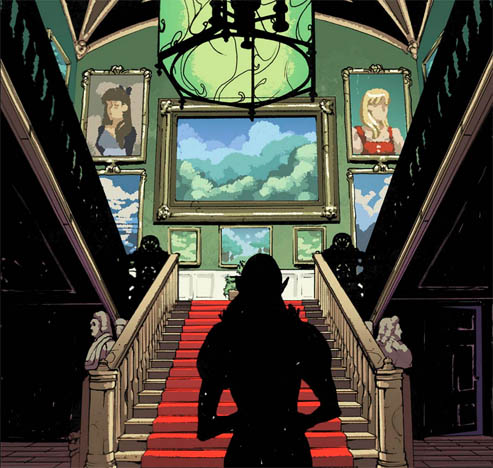 While the villainous Mastermind’s passing was mourned by very few, he was mourned by his own daughters, Regan and Martinique, who both assumed a version of his name upon his death. It has been stated by both women that they are half-sisters but, despite this, they may have been raised together. When Mrs. Gwynn tracked them down, she found them in them in the Wyngarde mansion. The source of the Wyngarde family wealth was never clarified and, given Mastermind's ambiguous background, it may have been family money or wealth achieved from his criminal activities. The staircase to the mansion led to a west and east wing. The west wing was adorned with a portrait of Martinique as a young girl, with the east featuring a portrait of Regan. [X-Men: Pixie Strikes Back #2] Despite their intense animosity for each other, the two women have had remarkably similar trajectories, both essentially starting out as a gun for hire [Regan, X-Treme X-Men (1st series) #6-9, Martinique, Wolverine & Gambit: Victims #1-4] with the occasional heroic deed, such as Regan's brief stint with the X-Men [X-Men (2nd series) #192-200] or Martinique punishment of the killer Arcade. [Wolverine & Gambit: Victims #4]

They were briefly willing to put aside their differences and joined a group called the Sisterhood upon the promise of their leader, Madelyne Pryor, who had offered to resurrect their father. Ultimately, the group were defeated by the X-Men and their plans arose to nothing. [Uncanny X-Men (1st series) #504, 508-511]

During the period in which Mastermind was dead, the illusionist was cloned by his old colleague from the Brotherhood of Evil Mutants, the teleporter Astra. Astra was attempting to create her own version of the original team. The clone's life was brief, as he was killed by Magneto shortly after his creation. All of Astra's clones appeared to be of low intelligence and were physically distorted/defective. [Magneto: Not a Hero #1-4]

Away with the Fairies

Martinique and Regan both considered their father a “horndog” but even they were surprised when they met the fairy Mrs. Gwynn, who claimed Mastermind had fathered her daughter, Pixie. Very little is known about the background of Mrs. Gwynn, save that she is a fairy and a talented magic user. She did mention a grandmother “Granny Griffith” from Bridge End in Wales who, according to Mrs. Gwynn, married a Nazi officer who had escaped from Camp 198 aka Island Farm, the prison being located outside Bridge End. The internees were all Axis prisoners, some of whom were awaiting prosecution during the Nuremberg Trials. Despite her otherworldly nature, Mrs. Gwynn had a very human revulsion to her grandmother's choice in husband. Poor choices in partner's appeared to be a family trait, given Mrs Gwynn's decision to bed Mastermind.

It's unclear if Mrs. Gwynn was married at the time of her daughter's conception but either way she made the decision to pass the girl off as the child of Barry Gwynn, a coal miner from Abergylid in Wales. Mrs. Gwynn named her daughter Megan.

[Note: Pixie's origin is very similar to the myth of the “changeling,” which historically was very prevalent within Ireland and the British Isles. According to the mythology, the faeries would steal newborns (in rarer cases adults) and replace them with members of their own race, who would masquerade as the human. The ruse was considered to be flawed, as the child would be “different” in some obvious way, lacking the ability to speak or walk for example. Tragically, in real world terms, these “changelings” were often children born with medical conditions that were not understood at the time, due to the lack of advancements in medicine. This mistaken identity could lead to fatal consequences for the “changeling” child.] 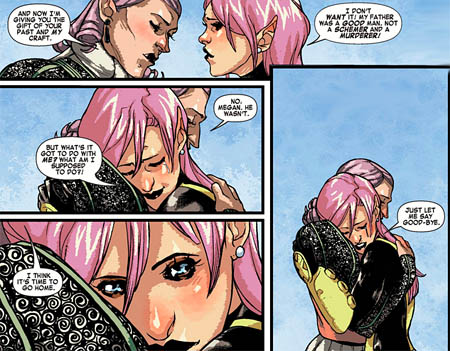 Megan came into her “inheritance” in her teens. From her mother she inherited her appearance and some degree of magical aptitude, including fairy wings. From her father, she obtained an effect which resembled  Mastermind's illusionary powers. [Origins of Marvel Comics: X-Men #1] Her “father,” Barry would die young, perishing in a coal mining accident a short time after the emergence of Pixie's powers. His body was seen in front of Pixie in a flashback and it's unclear if Pixie had attempted to save him or had recovered the body. At some point, Mrs. Gwynn left Megan in the care of her “paternal” grandparents. Mrs. Gwynn apparently encouraged her daughter to be educated by the X-Men, seeing it as an opportunity. She later gloated that she had tricked them into believing that Megan was the daughter of a coal miner and the “town totty,” indicating that Mrs. Gwynn may “glamour” herself when she interacts with “non-fae.” Pixie herself seemed to be fully aware of her mother's true nature. When Mrs. Gwynn revealed the true identity of her father to her, Pixie was distraught and struggled to believe it, given her affection for her late “father.” [X-Men: Pixie Strikes Back #1-4, X-Men: Pixies and Demons #1]

[Note: It was never stated that the Pixie's grandparents were actually her mother's late husband parents but it is the most logical answer.]

The original Mastermind recently got a second chance at life as a result of the Krakoan protocols and he was resurrected by the Five off panel. [Empyre: X-Men #2] While Martinique and Regan are likely to be overjoyed by this news, it remains to be seen what reaction Pixie will have. Given her innate goodness, it is hard to imagine her bonding with the nefarious Mastermind.