Introduction:
There are two types of April Fool’s Day jokes. The first is a literal attempt to hoodwink people who have forgotten for a moment what day it is. To make them believe that what they are seeing is for real… and then lower the boom. This is what we did last year in spades with the fake Wolverine Event Month.

This year, we tried the second type, where the audience is let in on the joke at first sight. With this kind, it’s an obvious gag not to be taken seriously – and the more absurd the better. And boy was this absurd.

Darkhawk dot Net!:
Over the last six and a half years, the UXN has tried to do its best to be the premier source of information for the X-Men on the Net. However, what if it wasn’t the world and lives of mutants in the Marvel Universe to which we had turned our watchful eye? What if it was another hero… like Darkhawk? So it was decided that for April 1, 2007, the UXN would become the “DHN” – Darkhawk.net. Special thanks go to Carter Summers, who created the image for the Spotlight headshot, as well as the altered UXN logo, both which you will see in the screenshot below. Notice that Darkhawk logo is superimposed over the UXN one, to show that this is already a tongue-in-cheek jest.

Of course, only having been created in mid-1990s and having had only one series, there were only issues of the single Darkhawk series to be put in the Latest Site Updates box. Not good enough. More importantly, not absurd enough. So, it was decided that fake series would be “summarized” and posted. A second series, a third series, a fourth series… The crazier the better. Personally, I am pretty proud of “Darkhawk Team-Up.”

Finally (at least for the Front Page), a little bit of text was written up, by yours truly, to give the impression that this ultimate Darkhawk fan site was not only a going concern, but was plugging away on a daily basis to cover a character that seemed much older and much more important to the Marvel Universe than the rest of us seemed to remember. Hey, if it worked for the Sentry… 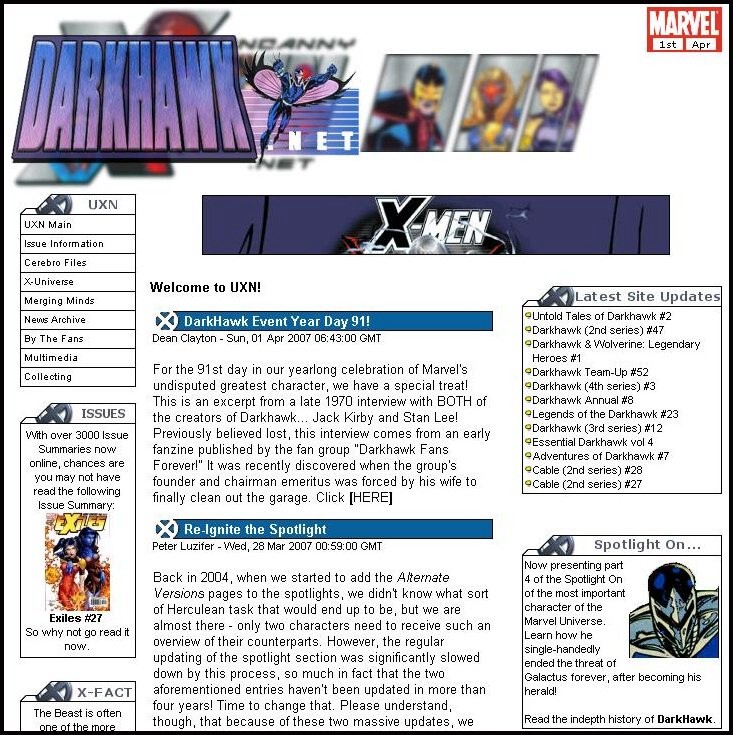 However, that was not enough. To what would the links to the faux Darkhawk summaries lead? Well, if we are to pretend that the “Hawk of Darkness” had been around longer than the 1990s, then why not pretend that he was among the earliest of Marvel’s characters? Further, why not pretend that he’s actually the first collaborative creation of Stan Lee and Jack Kirby? For that matter, why not have a fake (and hopefully humorous) interview between the two? Why not indeed.

Almost picking a year out of random for when it was supposed to have taken place, I originally chose 1972, but then moved it to 1970 and then to late 1970 in order to accommodate the jokes regarding Jack Kirby’s Fourth World and the “recent” cancellation of the X-Men’s series. Without further ado, here is the “ lost interview” of Jack Kirby and Stan Lee, discussing their greatest creation:

For the 91st day in our yearlong celebration of Marvel's undisputed greatest character, we have a special treat! This is an excerpt from a late 1970 interview with BOTH of the creators of Darkhawk... Jack Kirby and Stan Lee! Previously believed lost, this interview comes from an early fanzine published by the fan group "Darkhawk Fans Forever!" It was recently discovered when the group's founder and chairman emeritus was forced by his wife to finally clean out the garage.

Darkhawk Fans Forever! #85
DFF!: So Stan and Jack, how are you today?
Jack: Very good, thanks for asking.
Stan: Excelsior!
Jack: Oh, for the love of...
DFF!: As everyone knows, your creation of Darkhawk in "Amazingly Adult Fantastic Fantasy #11" in 1961 launched the Marvel Age of Comics...
Jack: The name of the title was Stan's idea by the way.
Stan: Why do you always bring that up in interviews?
Jack: I've told you a thousand times, I will always say that every time that title is mentioned. Roz won't even let me keep a copy in the house because of the title.
DFF!: As I was saying, everyone knows that Darkhawk came first, followed by your other hit, though all less successful, series, like the Fantastic Four, Avengers, the Hulk, Thor and X-Men.
Stan: Please don't remind me about the X-Men.
Jack: I drew that bunch as a joke. Who'd know he'd go and publish the stupid thing.
DFF!: Well, sales did spike a little when Darkhawk joined for a few issues after Professor X died. Unfortunately, the "Hawk of the Darkness" was too powerful and the writers wrote themselves into a corner after Darkhawk defeated Magneto, incarcerating him in "the Aerie," designed the nano-hawkbots that obliterated all Sentinel technology and designed the city on the Blue Area of the Moon, where all mutants were allowed to go and settle.
Stan: That Roy Thomas...
Jack: Do you think the series could ever be re-launched?
Stan: Not really. In my opinion, the X-Men are unmarketable.
DFF!: As I was saying about Darkhawk launching the Marvel Age of Comics, did either of you know that he would become so popular?
Stan: I had no doubt. When I was walking along that street at night and looked up and saw a hawk in the darkness looking down at me... I had the sensation of being protected. Like a super hero was protecting me. I knew I had hit gold! So, I called Jack and told him the idea.
Jack: After Stan sobered up a bit and explained the character to me more clearly, I was intrigued. I immediately drew up the costume and showed it to Stan. He didn't like it at first.
Stan: Too colorful!
Jack: Make it darker! Much, much darker! He's a hawk! A DARK hawk!
DFF!: How did you get the idea to make him the trainer for all new recruits for the Avengers?
Stan: Well, it just made sense! When someone is going to join the Earth's Mightiest Heroes, they need Earth's Mightiest Trainer! Darkhawk doesn't have time to actually join the Avengers, since he's protecting the rest of the planet from the scourge of villainy!
Jack: Did you take your meds today? I specifically reminded you...
Stan: On top of that, Darkhawk uses the Starhawk ship to travel the cosmos and help stop interstellar problems.
DFF!: Like his solution to the Kree-Skrull War, by conquering both homeworlds and setting himself up as regent.
Jack: He did what? Looks like I'm behind on my reading...
DFF!: What about him being the scientific consultant to Reed Richards? Did you ever think that was a stretch?
Stan: A pun! I love it!
DFF!: Completely unintentional, I assure you.
Stan: Still!
Jack: Anyone want coffee? I think I might go for some coffee.
Stan: I never thought it odd that Reed would ask Darkhawk for help. After all, he's the greatest super-hero of all time! Why shouldn't he be the greatest scientific mind?
Jack: Stan, do you ever listen to yourself?
DFF!: Well, guys, looks like our time is up, what with the Jack's rule that he can only be in the same room with you for five minutes at a time.
Stan: Five minutes already?
Jack: We're actually in the sixth now.
DFF!: Before you go, can you tell our readers what you are up to next?
Jack: I've just decided to take an idea of mine to DC, where I've been told I will have 100% creative freedom. I plan to call it the Fourth World.
Stan: I still say that you should draw that for Marvel and call it "the Eternals."
DFF!: Stan, what about you? Any more writing?
Stan: Absolutely! I have an idea for an April Fool's joke. It's a doozy, though not really a story, per se. My current plan is to publish it in the form of a fake interview.
Jack: A fake interview? That's the dumbest thing I've ever heard!
DFF!: Stan and Jack everyone!
Stan: Excelsior!

Final Words:
Excelsior indeed! I doubt that anyone was “fooled” when they came to the site (we actually even neglected to change the “Welcome to the UXN!” post), though again that was not the goal. Those that posted a response in our Forum seemed to have enjoyed the jest and even the interview was well received, which is a relief as it could easily have been considered a lame attempt at being funny. All in all, a fun – if not slightly offbeat – April Fool’s Day, brought to you by your friends at the Darkhawk Ne… uh… the Uncanny X-Men Net.