Greetings and welcome to yet another April Fools’ Day event at the UXN. As is our habit of mixing up whether we go for the “try to fool visitors” route or the “just do something wacky” option, we went for the latter this time. For the entire day, the Front Page of the site was reversed. Text, images… even the order of the columns. No one was obviously fooled by this, as that was not the intent. Rather we hope that it brought a smile to the face of our visitors, especially for those who state that they come to our site every first of April to see what we try to pull off.

Interesting anecdote about this year’s gag is that it is one that we’ve kicked around since the 2nd AFD (the year we went with the Darkhawk.net joke). We’d kicked it around each year but always ended up going with another idea that seemed much better. Just goes to show that not all ideas are bad… some just haven’t had their day.

Below is a screenshot of the Front Page. 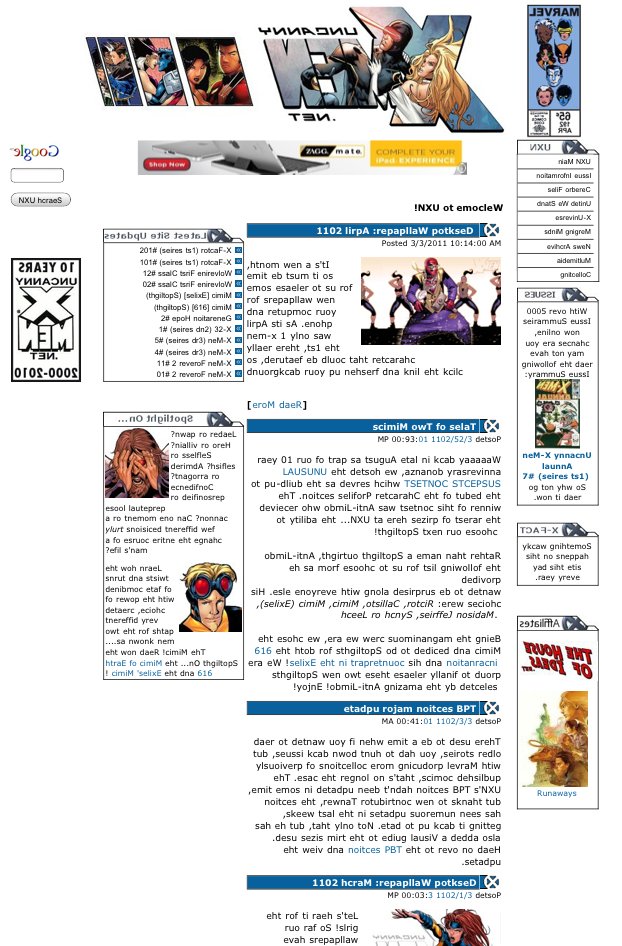 Originally envisioned, only the text and logo would have been reversed. However, when Dean Clayton noted that he would be able to reverse the columns as well, we went for the whole shebang. Reversing the text actually was a little trickier than we originally thought. If we reversed the text wholesale, each block would have been reversed and not each line. In order to keep the appearance of maintaining the “wraparound” of each line, we had to reverse each line individually. Additionally, we had to keep very careful about HTML coding for links, as those had to be the same – as otherwise the links would not work. However, while tricky, it was not too difficult. Thankfully, it was just the Front Page and not every page on the site.

For the X-Fact, we chose something that we felt would be a type of Easter Egg, hidden among the reversed text. No one mentioned it in the Feedback section of our Forum, so we’re not sure if anyone caught it: “Something wacky happens on this site this day every year.”

For the random Issue Summary cover, we discussed briefly if there should be any specific theme. Site Contributor Tanwer suggested a cover from the Marvel’s famed “Assistant Editor’s Month.” Now for those of you who haven’t been reading comics for 25+ years, there was a month in 1984 in which many Marvel titles were supposedly turned over to the book’s assistant editor. Without the much more seasoned editors to watch out, wacky things might happen. To suit that theme, a story a little unusual and more tongue-in-cheek would happen in that month’s issue.

For the X-Men, that month brought the appearance of the comical Impossible Man to the Xavier Institute in Uncanny X-Men Annual #7. We admit that it was a long shot that anyone might notice that the same cover was being shown each visit to the Front Page and divine the reason we chose it… but you never know and the choice was as good as any.

All in all, the feedback we received in the Forum was positive on this year’s gag and we hope that it was shared by the majority of visitors. As always, we are greatly humbled that people come specifically to our site on April 1st to see what we do. It means a lot.

Credits: While I reversed almost all of the text, Dean Clayton did the heavy lifting by coding the reversing of the site itself and the logo. Thanks to Binaryan for reversing a few images Dean and I missed, as well as working on the images above in this article.